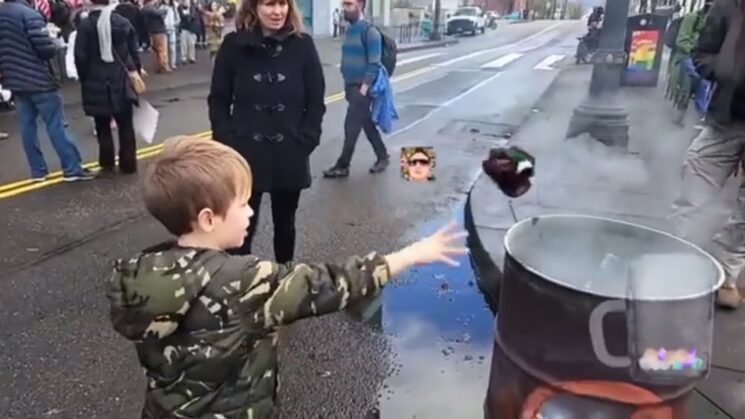 A Getty contributing independent photojournalist Maranie R. Staab recently covered an anti-mask protest in Portland, Oregon. She was captured in a video photographing a child throwing a mask in a burning barrel. The video caught her fierce criticism for the community, and she got under fire for allegedly staging the image.

Staab was covering the so-called “Mask BBQ Party,” organized by Free Oregon. It took place outside the Oregon Health Authority building, and the group was protesting against the state’s mask measures, as a response to this never-ending pandemic.

In a discussion on Twitter, someone claimed that Staab “offered to give her mask to a child to throw [into] the fire for a photo op.“

She offered to give her mask to a child to throw in to the fire for a photo op, but said it was her last mask and “these people” (antifascists) would yell at her if she didn’t have one on.

In a video garbage.com posted as a response, Staab is captured waiting for a photo, while the people around a barrel on fire are convincing a child to throw the mask inside. “Let’s wait till- this lady’s gonna take a picture of you, so we’ll wait till she says go,” you can hear a woman saying in the video.

yeah that was fucking unreal.
she staged the entire thing, talked shit, and a chud streamer recorded it all ?

video id – photographer, maranie rae, stages a photo op in which a child throws a mask into a burn barrel. the fire is being put out, she helps the child find a mask. pic.twitter.com/2GJ1EW6Qpj

The resulting image was posted on Getty, and garbage.com shared it on Twitter.

and here’s the result.
y’all sell this as authentic documentation of an event? pic.twitter.com/Ax3d9oKNJU

Since the video was posted, Staab has received criticism not only from netizens but also from acclaimed photographers and photojournalists. The photo in question has been removed from Staab’s Instagram, and it can no longer be found on Getty either.

According to PetaPixel, Getty has terminated its collaboration with Staab. In a statement, Getty representative said:

“Getty Images holds itself to a high standard of editorial integrity and we have a responsibility to provide faithful and comprehensive documentation of the events that we cover.

We will not be working with this photographer in the future.”