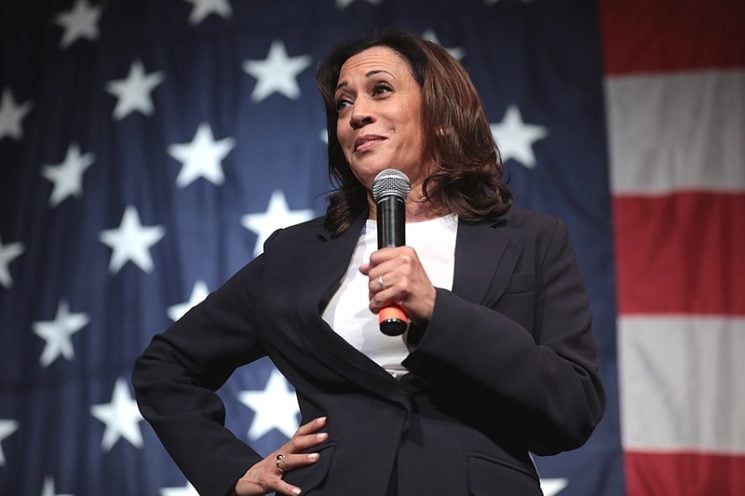 For its February cover, Vogue chose photos of Vice President-elect Kamala Harris – and both of them have sparked outrage. People have been calling out Vogue for making Harris’ skin lighter, but also for “bad lighting”, a “questionable” photo, even for the Converse sneakers she’s wearing.

Tyler Mitchell took the photos, and Vogue published them both on its Instagram, as well as in the interview the Vice President-elect gave for the magazine. One of them shows Harris in formal attire, while in the other she’s dressed more casually, wearing Converse Chuck Taylors.

When the photos were published, people were fast to criticize. Some comments on Instagram are pretty harsh, saying that the casual photo is “questionable,” “terrible,” and “disappointing.” But if you think people on Instagram are cruel, take a look at those on Twitter:

What a mess up. Anna Wintour must really not have Black friends and colleagues. https://t.co/8oCpEPkltU

No shit, & it goes well past just the lighting. It's not focused, the art direction is hideous & in no way speaks to Kamala Harris. The photographer/ crew clearly didn't establish a connection w/ her because she looks uncomfortable, who the hell shot this? Huge fail from Vogue.

Beyond that, what the hell is the message!? Garish color choices. An awkward, uncomfortable pose/photo choice (she is striking and powerful when photographed well). And what does standing on silk curtians have to do with the important progress she has made? Bad art, bad taste.

Folks who don't get why the Vogue cover of VP-elect Kamala Harris is bad are missing the point. The pic itself isn't terrible as a pic. It's just far, far below the standards of Vogue. They didn't put thought into it. Like homework finished the morning it's due. Disrespectful.

And I’m really surprised how much some people are bothered by Converse sneakers:

How dare you wear converse sneakers to a Vogue shoot. VOGUE. #KamalaHarris

As Phil Mistry explains, all the details in the controversial informal photo have their story. The pink and green backdrop was selected “as a nod to her Alpha Kappa Alpha the first historically African American sorority.” This is also the reason why she’s wearing pearls. As for Harris’ Chuck Taylors, they have become the trademark of her style, which Vogue itself recognized in an earlier piece. And I personally like that she’s wearing them. But then again, I don’t know much about fashion.

This certainly wasn’t the first time people called out Vogue. In 2018, it got under fire over giving Gigi Hadid “a blackface.” In July 2020, there were two other scandals. People were mad at Vogue Portugal for “romanticizing mental health” on the cover. Around a week later, Vogue got under fire again for not hiring a black photographer to take photos of gymnast Simone Biles.

Thankfully, there are also many people (including myself) commenting on the fact that Harris is a great choice for the Vogue cover. She’s the first woman and woman of color to be the Vice President of the USA. Also, there are more important things than Chuck Taylor sneakers on a Vogue cover to worry about.

As for the photos themselves, I like them. I would choose the one in the suit for the cover, I think it’s an overall better photo and Harris looks more comfortable in front of the camera in that one. But I also like her style in another photo even though it could have been better. I like the symbolism of the colors and pearls, and I think that this photo and her casual style makes her seem more approachable.

What do you think of this whole fuss? Was Vogue supposed to try harder to represent the Vice President-elect or you like the photos?