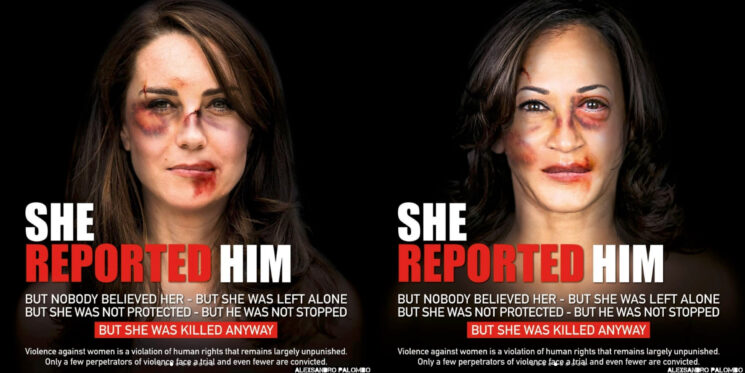 The women appear against a stark dark background, front-facing the camera, with their faces showing an agonising array of cuts, bruises, black eyes and bloody noses. Palombo states that he is raising awareness for the victims of domestic abuse, I imagine making the point that anyone can be a victim of gender violence.

He states in his Instagram post “Why should a woman report the violence if after the report she is not protected by the institutions and ends up being killed anyway?”. He goes on to say “a State that does not protect but leaves women alone in the hands of their tormentor becomes a silent accomplice.” It’s certainly a valid point. It is one thing to encourage victims to come forward and report the crimes, but to then abandon them back to their abuser is tantamount to corroborating in their further abuse.

The images have already been seen around Europe on the sides of buses and on billboards in both Milan and in Spain, where sadly gender-related and domestic violence is still very much an issue. However, it does appear that the artist didn’t ask for permission to use any of the images. Kensington Palace has apparently said that no permission was given for the use of the image of the Duchess of Kent.

This is not the first time that Palombo has created a series of images using well-known women to highlight the issue. Last year he created a social media campaign titled “Just because I am a woman” which used former first lady Michelle Obama, Chancellor of Germany Angela Merkel, and Hilary Clinton in a similar manner to the latest series.

These images are undeniably powerful, and by all rights should make us feel uncomfortable. However, the fact remains that the artist used the images without consent. Was he right to do that and would the images have been less impactful if he had permission?