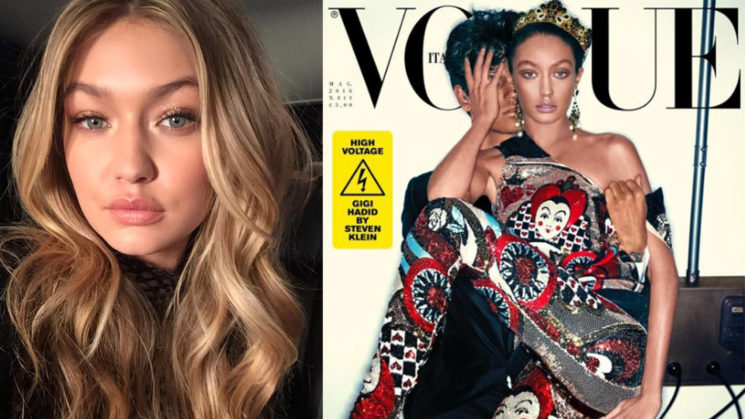 Vogue Italia has recently published a cover featuring Gigi Hadid that caused quite a stir. The model appeared with overly-darkened skin, causing the public to accuse Vogue Italia and photographer Steven Klein of racism. It has gone so far, that even Hadid herself has apologized for the controversial cover, explaining that she had no control over the final result.

As you can see, Hadid doesn’t really look like herself in the photo. After publishing the cover, both Klein’s and Vogue Italia’s Instagram post were flooded with mainly negative comments. Some users have called out the photographer and the magazine for being racist and “blacking up” Hadid. What caused the rage in some of the commenters is the fact that Vogue Italia could have just hired a darker skinned model.

The other comments were focused on how “awful” the photo is, pointing to the “terrible Photoshop job.” Many people couldn’t even recognize the famous model, and I can understand why.

Of course, there were some people who tried to prove how ridiculous the racist claims are: “Has her tan been overdone? Probably, but is this black face? No. I had the same tan when I came back from a summer holiday in Italy, people are taking this too far.”

Despite the occasional comments of encouragement, those reflecting on “racism” and “bad Photoshop” prevail. So, as the Mirror writes, the model apologized to and tried to explain the photographer’s creative decisions:

The bronzing and Photoshop is a style that S. Klein has done for many years and I believe was what was expected from the shoot (to show me in a different way creatively).

BUT, although I understand what Vogue Italia’s intentions were, it was not executed correctly, and the concerns that have been brought up are valid.

I want to address this for those who were offended by the editing/retouching/coloring of the cover. Please know things would have been different if my control of the situation was different.

Hadid apologized because she never wanted “to diminish those concerns or take opportunities away from someone else.” She pointed out that “there are real issues regarding representation in fashion” and added that “it’s our responsibility to acknowledge those issues and communicate through them to work towards a more diverse industry.”

I must point out that this isn’t the first time Gigi Hadid and Vogue have caused a public outrage. A couple of months ago the Hadid sisters came under fire after posing nude for British Vogue. Only this time the accusations are directed toward the bad Photoshop job and racism.

I can’t speak for the photographer or Vogue Italia, but I don’t think their intention was to offend anyone. Personally, I think that racism accusations are a bit over the top here. But I do have to agree with the accusations of bad Photoshop job. What do you think?