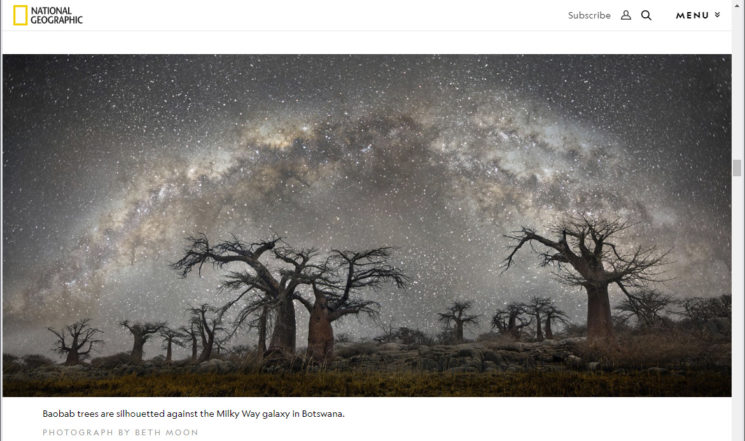 National Geographic is facing criticism after posting an article containing a manipulated photograph by photographer Beth Moon of the Botswana night sky. It shows Baobab trees silhouetted against the Milky Way. The criticism is over the fact that the Milky Way has been quite obviously manipulated, showing several cloned areas of the Milky Way.

The article is titled “See the world’s oldest trees by starlight”, and was published on April 26th to the National Geographic website. It’s a display of pretty fantastic images from around the world with photography by Beth Moon. The write-up was by Catherine Zuckerman, Nat Geo staff writer on the science desk.

But one image, in particular, was quickly jumped on after National Geographic posted a link to the article on their Facebook page. One commenter even highlighted the duplicated areas of the Milky Way. 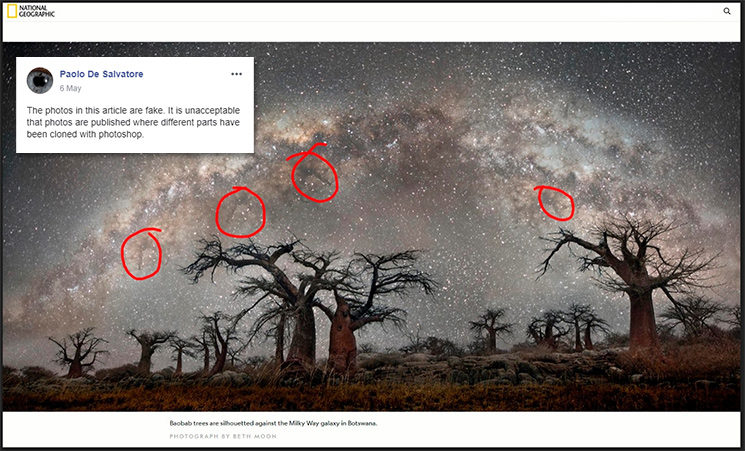 To make it a little clearer, here’s a closer look, showing where the same area of sky has been duplicated. Once you see it overlaid, it becomes quite obvious.

The link to the article on the Facebook page currently has over 23,000 reactions, over 7,900 shares, and over 500 comments, although not all of them are positive glowing references for the article.

In the article, there is no mention of this image being a manipulation. Most astrophotographers realise that shots like this will often be composites in order to minimise sensor noise and maximise real detail through the use of exposure stacking. This is where you create many shots of the night sky, aling them in Photoshop and then average them out to lessen the effects of high ISO sensor noise while retaining the actual night sky detail.

But that’s a very different thing to copying and pasting entire chunks from one part of the sky to another. You can see the complete article for yourself on the National Geographic website. There is a lot of pretty outstanding photography in it, to be fair. But this one definitely caught some negative attention.

You would think somebody writing for Nat Geo’s science desk would realise that this isn’t what the Milky Way actually looks like.

Should Nat Geo have declared that it was manipulated?