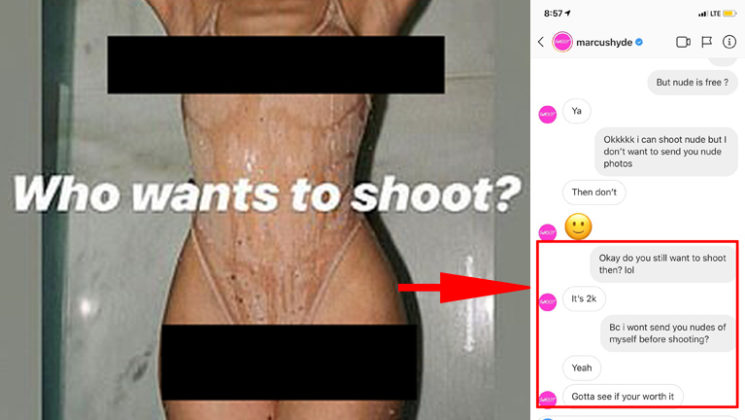 Photographer Marcus Hyde, who worked with celebrities like Ariana Grande and Kim Kardashian, was recently accused of sexual misconduct. It all started when Los Angeles-based model Sunnaya Nash shared screenshots of a conversation with him, where he offered a free photoshoot only if she sends him nude photos first. After Sunnaya went public, a few more women spoke out about the same (or worse) treatment they allegedly received from Hyde.

Hyde published an Instagram Story with a photo of a model posing in a shower, wearing a nude see-through bodysuit. There was a caption over the photo reading: “Who wants to shoot?” Sunnaya sent him a direct message to ask about the shoot. The photographer allegedly asked to send him nudes beforehand so he could see “if she was worth it.” When she disagreed, he said that the shoot would then cost her $2,000. Sunnaya told him that she wouldn’t do it, and the conversation didn’t end in a classy manner.

After posting the conversation screenshot to Instagram, Sunnaya was warned that her story went against the community guidelines and that her account might be deleted. So she turned to Twitter and posted the screenshots there:

From here on, there have been several more accusations against Hyde. Instagram account @diet_prada has shared a Story with experiences from other models who have allegedly been sexually assaulted by Hyde. When you look up “Marcus Hyde” on Twitter, there are even more accusations. Even Ariana Grande posted an Instagram Story to urge women not to work with photographers who make them feel uncomfortable. She also encouraged her fans to tag the respectful photographers who they love working with. She didn’t explicitly name Hyde, but folks at Daily Mail have noticed that she unfollowed him on Instagram.

Twitter user Jacqueline Bush writes that she loves Ariana Grande, but finds her response problematic. “Saying that women should just avoid working with men, who manipulate power dynamics to get them to do things they are uncomfortable is wrong.  Men need to stop putting women in these situations in the first place.”

I love @ArianaGrande but this response is problematic. Saying that women should just avoid working with men, who manipulate power dynamics to get them to do things they are uncomfortable is wrong. Men need to stop putting women in these situations in the first place #MarcusHyde pic.twitter.com/87qYIMwP51

I must say that this tweet reflects my opinion on the matter, too. Sure, models should definitely keep themselves and each other safe. They should recommend photographers who are amazing at what they do and make them feel comfortable. But that’s not the solution to the problem. That won’t stop the harassment.

After Sunnaya went public with her story, many women have reached out to her sharing their own alleged experiences with Hyde. None of them good, as you probably may assume. It’s not mine to judge whether the accusations are true or false. However, the fact remains that sexual harassment is real, and it’s unfortunately not so uncommon in the industry.

« You can now get near-instant FAA authorization to fly your drone in controlled airspace
8-bit vs 16-bit images – does it really make a difference what you work in? »