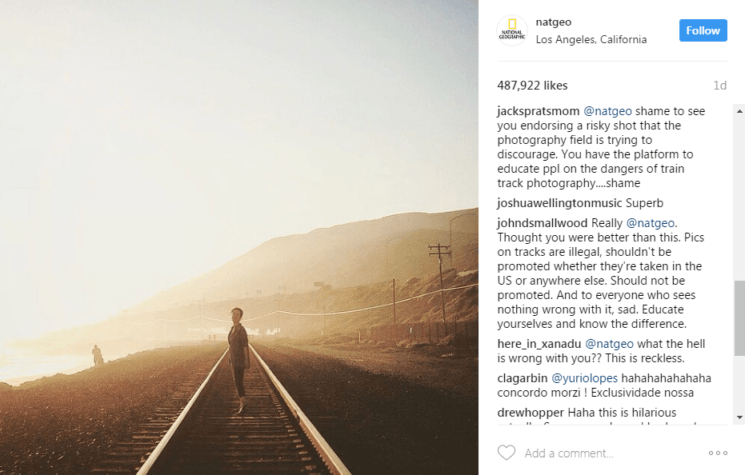 It seems that lately there’s been an entire movement aimed at getting photographers and models off the train tracks. No wonder, considering how many people die as train hits them while taking photos. TODAY recently investigated how long it takes for you to hear the train. It turns out that, once you do – it may be too late.

In the midst of it all, National Geographic posted a photo on their Instagram account with a girl standing on train tracks. According to the users, this image encourages both dangerous behavior and breaking the law. Therefore, there were fierce reactions of many photographers, who flooded the photo with comments of disapproval.

The community accused National Geographic of being bad role models and encouraging photographers to recreate shots that may endanger their lives. One of the users pointed out that it’s been less than a month since the last railroad/photograph related deaths. And I believe this is only one of many tragic stories, who knows how many we don’t hear about. Another issue is that taking photos on train tracks is illegal, and the community also noted that in the comments.

Despite all the disapproval, there are some positive reactions on the photo as well, along with almost 500,000 likes. One user suggests NatGeo “not to listen to hate.” And apparently, they don’t, since the photo is still there. Another one points out that people are just being “oversensitive:”

Oversensitive or not, I still don’t see the point of risking your life for a shot. Don’t get me wrong, I don’t think each of us should live wrapped up in cotton wool, and stay away from every possible risk. To be fair, life itself is risky, and you never know when something bad can happen. And sometimes you need to take a risk to achieve something. But still, I don’t see why anyone would expose themselves to serious danger just to take a shot thousands of people took before.

One more thing, I understand why people find trains and train tracks attractive, I love them as well. But you can always minimize the risk – take photos at inactive tracks or even old and abandoned ones. Or just come to Balkans for this photo shoot, trains here are as fast as a wounded snail. Joke aside, I believe NatGeo should have withheld from posting this photo on their Instagram. Taking photos on active train tracks is illegal, but above all – very dangerous. And we have the evidence for this in tragic stories that keep appearing.

I’m curious to hear your thoughts on this. Is this a wrong move from National Geographic? Or are we indeed being too sensitive?

« How to get that cinematic look with an f/1.2 lens in bright sunlight
Film retrieved from a buried capsule shows life in Nazi-controlled ghetto [NSFW] »