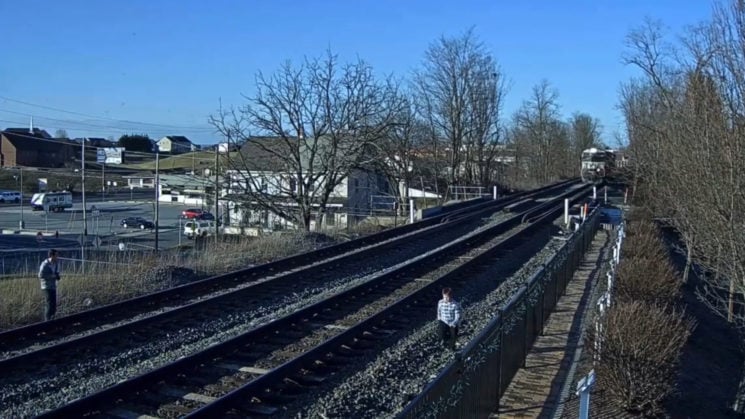 When will people ever learn that this is not only dangerous and stupid but also highly illegal in most parts of the world? Yet again, we hear another story of not just one somebody, but 8 somebodies almost being hit by a train for a photo shoot on active train tracks.

Shot by Virtual Railfan, the video shows a family made up of the mother, father, two girls and three boys, along with a photographer doing a shoot on the tracks in Greencastle, PA, barely being missed by a huge train with only seconds to spare.

The video shows the family aimlessly wandering around the tracks before the hurried yell of “Here comes a train!” is heard, at which point they all seem to run around like headless chickens, not sure which way to go, with some ending up one side of the tracks and some on the other before the train comes barrelling through a few seconds later.

If any of them had tripped or fallen while trying to get out of the way, it would’ve gone much worse. Judging by how easily they seemed to lose their footing before the train got close, they were very lucky that didn’t happen.

The video was also posted to Facebook where it has received several hundred shares and comments – not one of them positive.

Operation Lifesaver has a number of tips for keeping safe around train tracks, although why “Never walk on the tracks” is only number 2 on the list, I’ve no idea.

I don’t know how many times websites have to report about near-misses (here’s another) or actual fatalities (oh yeah, there’s loads of those) around train tracks before people wake up and realise that it’s just not worth it. And don’t say “I’ll hear it coming!” because it’s nonsense (and still illegal). If Hollywood film crews can’t avoid them with a few dozen people looking out, then you’ve got no chance.

Even if you don’t care about your own lives, this will destroy the lives of anybody in the cab of that train when it hits you.

Aside from being stupid, dangerous and illegal, the photos also look terrible. Just stop.