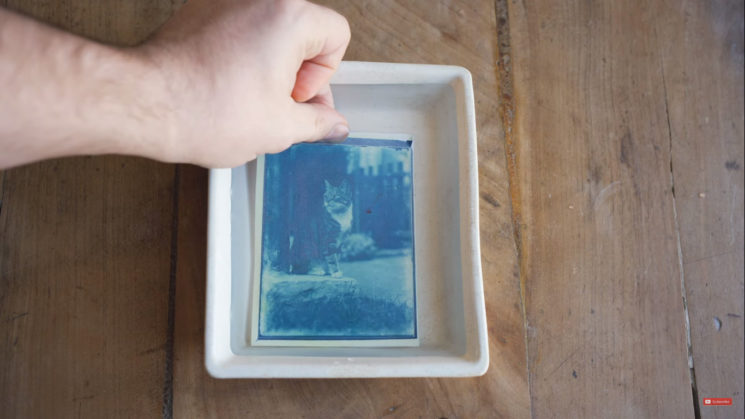 French photographer Mathieu Stern has shown us some weird, funny, inspiring and gorgeous projects and images so far. And the latest one made me kind of emotional. Mathieu found a time capsule from1900 in his old family house. Among other things, it contained glass plate negatives – and he decided to develop them. In the video, he shows you how he did it using cyanotype, and you can also see the beautiful images he ended up with.

Mathieu says that someone in his family told him about a possible time capsule in their old family house. So, he went there to look for it, and he found it. I felt emotional and a little sad watching the objects that belonged to an unknown little girl: cardboard cutouts, a seashell, a dip pen… And a couple of glass plates.

Judging from the objects inside, Mathieu says that the box dates around 1900. He tells me that he isn’t sure who it belonged with. It could have been a visitor, a kid staying there for a while, or perhaps one of his ancestors. Many people came and went through his family house, and one of them has left a little treasure box for Mathieu to find 120 years later.

So, he decided to develop the glass plates using one of the oldest processes: cyanotype. In the video, you can see how the process went, and I found it pretty soothing to watch. Mathieu also shows the end result, and I think that the photos he got look absolutely beautiful!

Have you ever found a treasure like this in your own family home? If so, let us hear about it in the comments.

Watch: How to shoot and develop color photos with a camera obscura at home

How to create autofocus with a 120 year old lens

Watch a single cell develop into newt in only six minutes