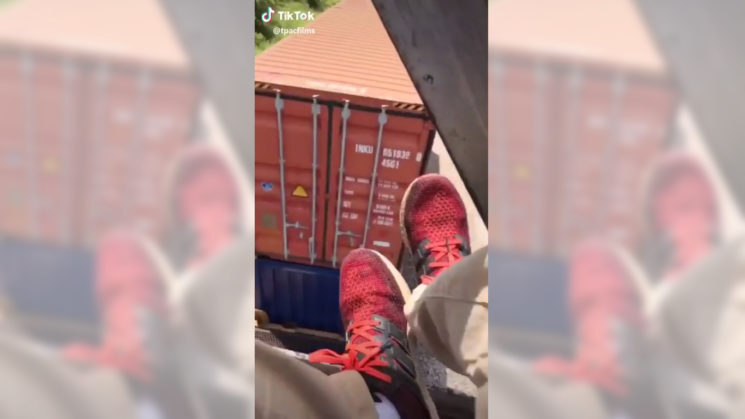 Anyone in their right mind knows that standing on train tracks or too close to them is extremely dangerous. But it seems that people keep inventing new dangerous stunts they pull around trains just to get likes on social media. A video that recently popped up on my feed shows a man who nearly lost a leg as a train passed under his feet. Yes, under.

It was only yesterday that we saw a woman having a close call when a train almost hit her. She was standing too close to the tracks and a passing train tore a hole in her coat. The video above was posted by someone named Tim on TikTok. It shows his feet as he’s sitting on a grade separation bridge, and a train is passing below him. At one point, one of the carts nearly hits him in the legs. If that had happened, he would have probably be lost his legs or have severe fractures.

This video was also posted on Reddit, where it received plenty of… interesting comments. But some of them are pretty useful, actually. One user explains that modern grade separation bridges are built to minimum clearances. “Why build a bridge higher or longer than you need?” This is why a train cart can easily reach someone’s dangling feet.

Thankfully, Tim apparently had quick reflexes (or simply lots of luck), and I sure hope he won’t do this again. Sure, it won him nearly 80k likes… But I’m pretty sure social media likes won’t bring your life (or your limbs) back if a tragedy happens. So please, be clever and responsible when shooting near or above train tracks.

This amazing photographer was born with no legs or hands

« Beginners, do you really need a camera bag?
How to shoot epic astrophotography panoramas that cover the night sky »