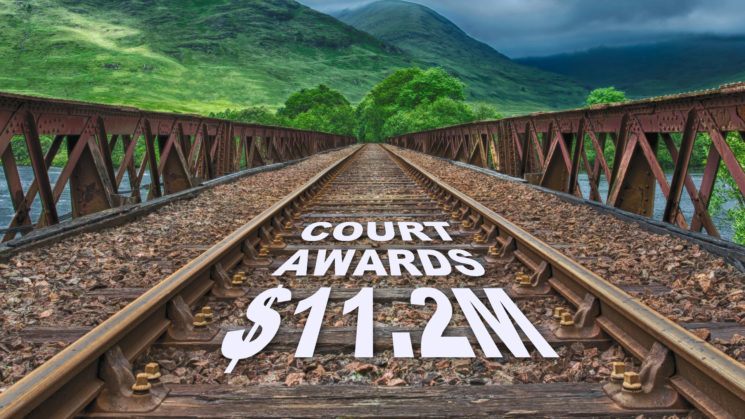 Midnight Rider was to be a biographical movie on the journey of Gregg Allman. From struggling artist to the eventual success of the Allman Brothers Band. Then the realisation that he needs to get clean or risk losing his life. It was tragically ironic, then, that filming for this movie actually did cause somebody to lose their life.

On February 20th, 2014, 27 year old camera assistant, Sarah Jones, was hit and killed by a train while filming on tracks. After a three year legal battle, a Savannah court yesterday awarded Jones’ family with $11.2 million. Oddly, though, the court determined that CSX, the train company, are liable for 35% of that, or around $3.92 million.

When the story and subsequent footage was released in November, 2014, it seemed pretty cut and dry. Especially after some pretty damaging comments from the movie’s lead actor, William Hurt. CSX say they denied the producers permission to shoot on the railway tracks. Twice. But the court found them liable for the largest chunk of the award. 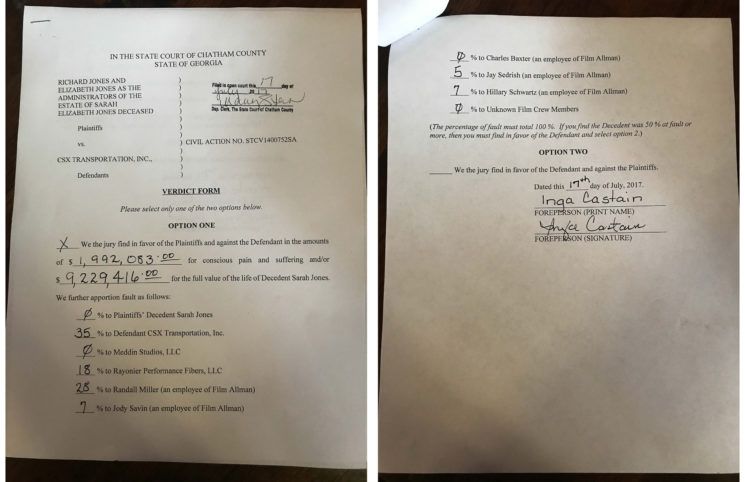 They weren’t the only ones held responsible, however. It breaks down as follows.

Deadline reports that the jurors say that Jones had zero liability, as one would probably expect, given Hurt’s concerns that safety was ensured. But, given that CSX denied permission for the crew to film on the tracks several times, and the crew went ahead and did it anyway, I don’t see how they’re to blame for any of this. They shouldn’t have been there in the first place.

The production company, Allman LLC was also fined $74,900 by OSHA in 2014, although that figure pales in comparison to yesterday’s judgement. Director Randall Miller, wife & busines partner, Jody Savin, and executive producer, Jay Sedrish were also charged with involuntary manslaughter and criminal trespassing in 2014.

Sarah’s parents, Richard and Elizabeth Jones released a statement after the trial was concluded.

Elizabeth and I have spent the last 3 plus years wanting to understand how our daughter, Sarah Elizabeth Jones, tragically lost her life. That search has now come to a close.

Sarah’s life was a bright beacon of hope that was snuffed out too soon.

Elizabeth and I want to thank our attorney, Jeff Harris, his partners and exceptional staff, who worked so hard for Sarah. We also would like to thank our Columbia attorney Jake Moore for his guidance.

We felt that this trial was necessary in order to learn what happened that tragic day of February 20, 2014. It is only with the discovery of what could have been done differently that we might avoid another similar tragic loss of life.

We have learned much from this trial. No doubt that the decisions made by those in charge of Film Allman, LLC were foolish, criminal and, in our view, selfish. That said, this trial disclosed a number of exceptionally poor judgements and ignored opportunities by CSX Transportation to prevent this tragedy. Frankly, I believe that the evidence in this trial indicated that CSX has systemic issues that need corrected.

We miss you Sarah.

I’m happy that the matter is finally over for Sarah’s family and that they have some closure. Although, I still don’t understand how the rail company are in any way liable for any of this.

Teenager killed by a train while taking his senior photos