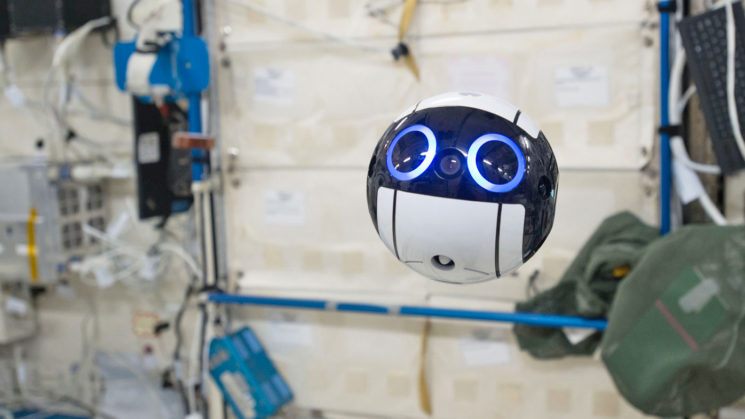 Looking like something pulled right out of Wall-E, there’s a spherical object floating around the International Space Station. This object is Int-Ball, a camera drone that explores the ISS autonomously or via remote control from earth. Developed by the Japan Aerospace Exploration Agency (JAXA) the first videos of it in action have now been released.

Int-Ball’s objective is to help alleviate some of the work done by the crew. JAXA estimates that the onboard crew spend about 10% of their working hours with a camera in hand. Being able to have Int-Ball explore the ISS instead of the crew frees up valuable time for other duties.

The Int-Ball arrived on the International space Station on June 4th, aboard SpaceX’s Dragon capsule. It now lives inside the Station’s “Kibo” science module.

At the core of Int-Ball is a three-axis control unit, which you can see illustrated in the video below. It reminds me a lot of this self-balancing, “walking” cube. In fact, examples on the JAXA website show that it could be the very same technology. Along with a dozen fans, this unit allows Int-Ball to move and orient itself in zero gravity. There’s a navigation camera which allows Int-Ball to look for pink markers that it uses for positional reference. JAXA say that the exterior and inner structures of Int-ball were manufactured using 3D printing.

The camera which records the video is located between its two “eyes”. This allows crew on board the Station to see in which direction Int-Ball is looking. It shoots both still images and video, which can be checked in real time by flight controllers and researchers on earth. These images can then be fed back to the onboard crew.

JAXA say that their goal now is to improve Int-Ball’s performance to eliminate all photography by the on-board crew. While this would allow them to dedicate that time to more important things, I hope it doesn’t mean the end of the amazing photography and video the astronauts regularly show us.