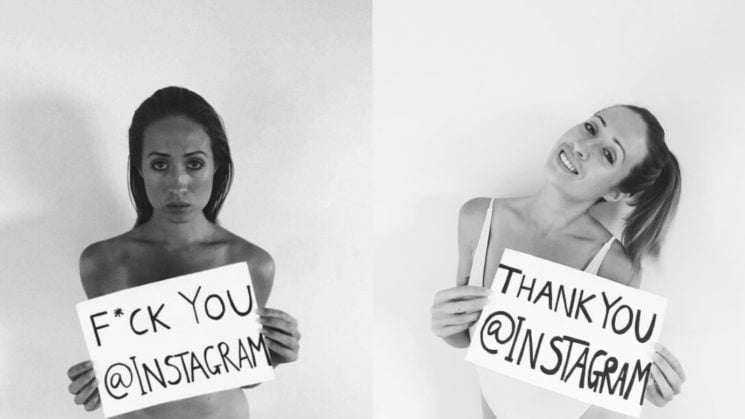 We all know how important social media platforms are these days for promotion our brand. In the case of Australian blogger, Jessa O’Brien, (a.k.a. thenudeblogger), that platform is Instagram. With over 43,000 followers, it’s certainly helping her to get her blog out in front of an audience. But she hit a snag when Instagram shut down her account.

Instagram parent, Facebook, has a fairly strict “no nudity” policy. So, it wasn’t really all that much of a surprise. But, on Instagram, things seem to be fairly inconsistent with how this policy is enforced. Many of us know somebody who’s been through this, or have been through it ourselves. To add to the confusion of what is and isn’t allowed, Jessa’s account has now been reinstated.

Jenna’s feed, given the name, obviously contained a fair amount of nudity, although nothing graphic. Nothing that really should have broken the rules. But Instagram took it down anyway. As mentioned in the video above, Jessa attempted to contact Instagram and received no resposne. This also isn’t too surprising, as neither Facebook nor Instagram tend to really do much human interaction themselves (ironic, huh?). So, she started a new account, re-uploading all her images, but adding one more at the end. Clearly she wasn’t happy.

That’s when Jessa says the media coverage started. She received a lot of attention which included both a lot of support and some criticism. What happened next is a bit of a mystery. If Jessa knows, she’s not saying, but suddenly her account was back. And her attitude toward Instagram went from negative to positive.

Jessa hails this as “Win for body-positivity”. I’m not going to get into the “body positive” discussion. That debate is for you guys, and you can read Jessa’s complete post here. But the event as a whole does raise some interesting points on Instagram’s policies. As well as their enforcement of them.

I know quite a few photographers who’ve received temporary or permanent bans from Instagram over boudoir and similar images. None of these images are graphic, and many of them aren’t even nude. Some of these photographers had rather large followings. Potential clients would and did find them through their Instagram feeds. Losing their Instagram account has a noticeable impact on their real world income.

I have been reminded of just how aloof, pervasive, elusive and unpredictable social media can be. One day we’re made obsolete, the next we’re viral.

So, what makes Jessa so different? Is Instagram actually starting to listen? Or do they just worry about the bad coverage by the press?

Perhaps this does set a new precedent and means those photographers caught up in unjust bans can come back. Or maybe it just means that more people need to go to the press with their story.

Ultimately, though, Instagram’s house, Instagram’s rules. And they can change them or make exceptions any time they choose. It sucks, but that’s the reality.