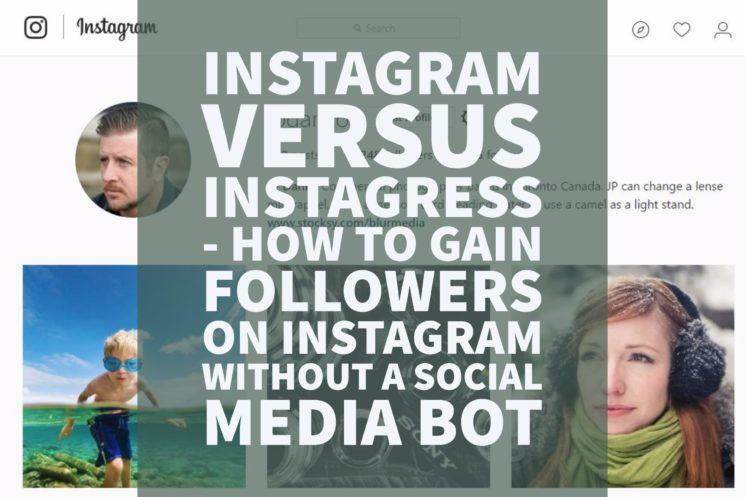 If you’re a social media marketer, news that Instagram has finally been able to shut down Instagress, one of the most popular social media bots out there, is pretty big news.

It’s no secret that the fastest way to grow a social media following is to simply follow and comment on other people’s posts – some of whom will then follow you back.

I know several Instagram users who have been using Instagress for years, so in this article, I will share some thoughts on the effectiveness of Instagress and other social media bots, and tips for building an Instagram following the old fashioned way.

Yes it was very effective…to a point.

The fact is social media wouldn’t be over-run with bots if they were not effective at fooling actual users into interacting and following automated accounts.

The actual business value of growing a large following on any social media network is debatable (for more, read: “The Value of Social Media Followers: Does It Matter If They Are Real Or Fake”), but if you were launching a new account – a bot like Instagress was a proven way to attract a quick following.

If you’re on Instagram, I am sure that you will be familiar with the work of Instagress – for example, take a look at the comments on this photo – a bunch of one liners and emojies – most likely generated by bots:

Instagress was reliable and pretty easy to use – all you had to do was create an account, add some tags to target, write a few canned comments and set a schedule – the bot would then follow people and comment on new photos. After the initial follow cycle, Instagress would then go back and unfollow people.

There were many sophisticated options that randomized the bot’s activities to avoid Instagram’s efforts to stop automated posting, and many other options to really target specific user groups – it was a very effective tool – but it’s effectiveness was still limited.

In order to fly under the radar, Instagress was slow by design – it doled out follows and comments in a way that might mimic actual human behaviour, so it took time to grow a following.

There also seemed to be an upper limit to the number of followers you could gain – after a few thousand followers, Instagress became less and less effective.

The whole purpose of social media is to share and interact with people, so a whole bunch of bots yapping with each other defeats the purpose – so good for Instagram for fighting back. 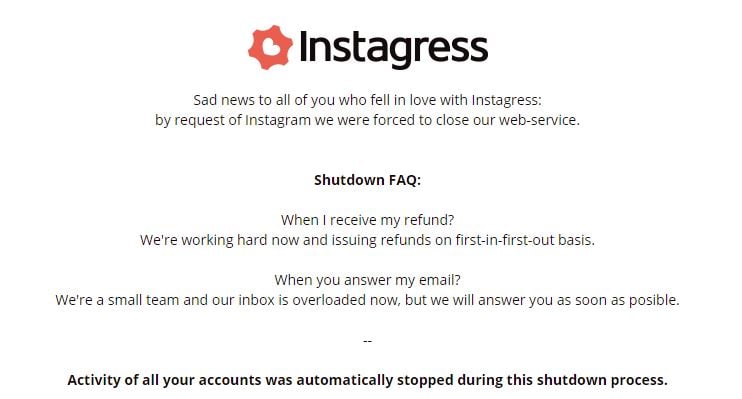 My personal favorite is Later.com (click here for 10 free posts!)

Later allows you to upload images directly from Dropbox or Google Drive, or from any other local storage on your computer, phone or tablet. You can then schedule posts and write captions directly in the Later web interface (or using the phone / tablet app) – instead of on a mobile device.

Later is a huge time saver and way better than manually posting from your phone – and it meets Instagram’s terms of service (for more, read “Schedule Instagram Posts from Your Computer With Later”) 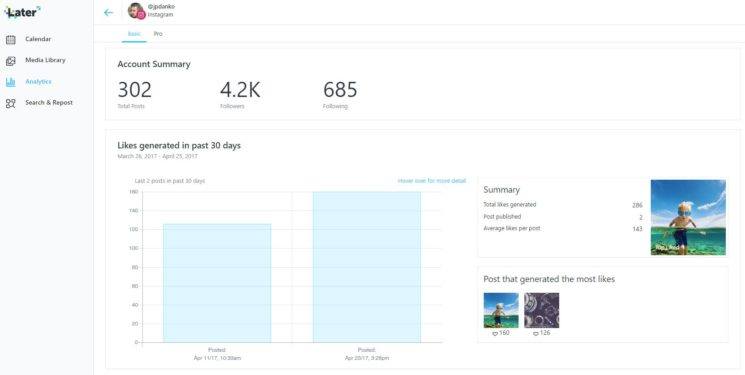 I have also used Pixbuf, which is a fantastic way to automate all your social media posting, but as far as I know automated posting to Instagram from Pixbuf is not within Instagram’s terms of service (for more, read “PIXBUF – Schedule Photography Posts to All Your Social Media Accounts from One App”).

Computer automation is great, but as a human Instagram user, I have been thinking about what accounts I personally choose to follow and how I can incorporate these trends into my own posting behaviour (I don’t always follow my own rules, but I probably should).

Here are a few of the key things I look for on Instagram:

Great Interesting Photos – I can see mediocre, mundane photos anywhere – if I am going to follow your Instagram account, I want to see great photos that are captivating.

A Lot Of Images – I tend not to follow Instagram accounts that have less than at least a couple hundred posted images. If an account has less images than that, it just feels like the person behind the account probably isn’t talented enough to add more.

A Lot of Followers – Similar to my bias for only following Instagram accounts that have a lot of images, I tend not to follow users that have less than a few thousand followers. Again, it’s not a hard rule, but I just find accounts that only have a handful of followers usually aren’t that good.

Easy on the Filters and Processing – I think we hit peak vintage film look / HDR circa 2014…I’m as guilty as anyone at overdoing it, but as soon as I see a candyfloss HDR or a VSCO film pack – I’m done.

Personalized Images – I know that I said I don’t generally follow Instagram accounts of people who post images of flowers, cats, kids and food – but I do like accounts that feel personal. I want to have a sense of who the photographer is, what they look like and what they do.

It Helps If You’re Good Looking – Speaking of personalized images, I’m not going to lie: if you have a decent profile photo and the occasional personal photo in your account and you’re reasonably good looking (male or female, I appreciate both) I am much more likely to follow you (sad but true). 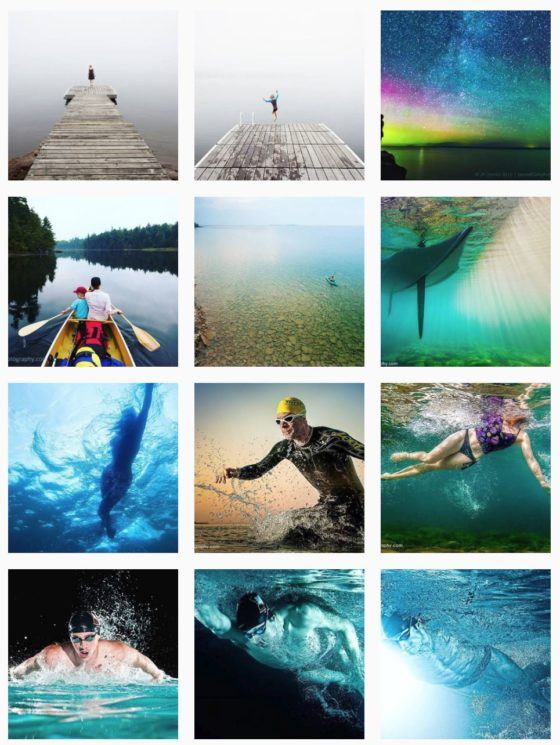 On the flip side, there are a few pet peeves that ensure I will never follow your account:

Aggregate Accounts, Hubs Reposts & Features – I want to see original work by individual artists – not work that has been syphoned into some aggregate account and regurgitated. In my opinion aggregate accounts, hubs, reposts and feature accounts are little better than automated bot accounts (and many are nothing more than that – for more, read: “Instagram Hub Feature Photo = Copyright Gram? #Instascam”).

Blatant Advertising for $hit – No I don’t want to buy vitamins, knockoff handbags, jewelry or body wraps (whatever those are). Ironically, I don’t mind the occasional product shout-out or strategic product placement – I actually appreciate finding out what people I like are using, doing or even wearing – but if you’re peddling crap – I’m done.

Inspirational Quotes – I get it, you love Jesus, want to share God’s beauty in the world or just genuinely love passive aggressive inspirational gym quotes – but to be honest, I just don’t care and I’m not going to waste my time.

Pet Accounts – Because…well seriously, who has time for this.

Were You An Instagress User?

Were you an Instagress user? How do you feel about the service being shut down?