After writing about how I use Later.com to schedule Instagram posts, a reader suggested PIXBUF as an alternative that can schedule photography posts across all popular social media accounts from one app.

PIXBUF is currently free and sounds pretty awesome, so I thought that I’d try it out – continue reading for my thoughts.

I currently use Later.com and IFTTT (If This Then That) to automate the majority of my social media posting (more on that here).

The original image is posted to Instagram using a scheduled post from Later.com. IFTTT grabs that photo plus as much of a caption as will fit in Twitter’s character limit and posts it to Twitter (as a photo – if you directly link Instagram to Twitter it will only post a link – which is why you have to use IFTTT), IFTTT also posts the same image plus the full Instagram caption to my Facebook page.

I could use IFTTT to post directly to 500px as well – but there are a number of problems with that approach.

First, Instagram’s 1080px image resolution is much too small for 500px. Second, Instagram strips out all metadata so I would still have to manually keyword each image in 500px, which defeats the purpose of animating the process.

So as of right now, I manually post to 500px, which is the main reason I don’t post photos there very often.

I also use IFTTT to help protect my copyright by saving copies of every image I post online, plus the date and URL to Dropbox, plus a copy of the post record to Pocket (read more about best practices to protect your copyright here).

I uploaded a test photo that was originally exported from Lightroom at a resolution of 2500px. Once uploaded, I entered a Title, Description and a handful of tags in the fields provided. You can also set the 500px category which is very important for posts to 500px. 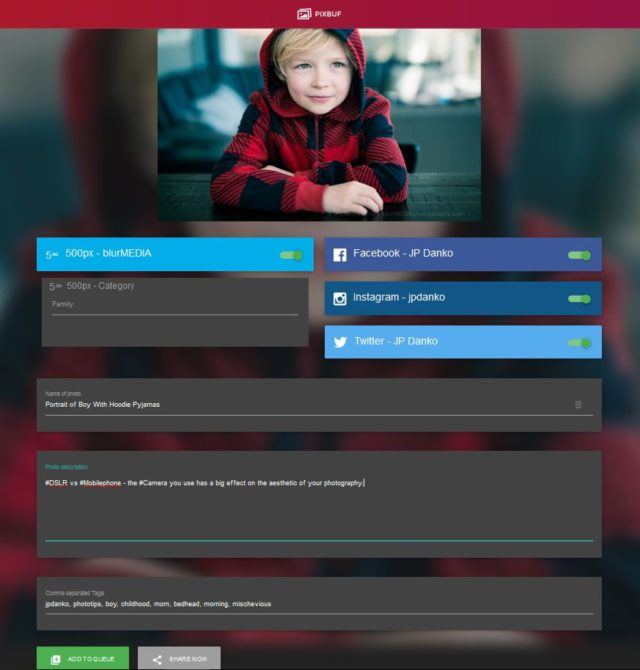 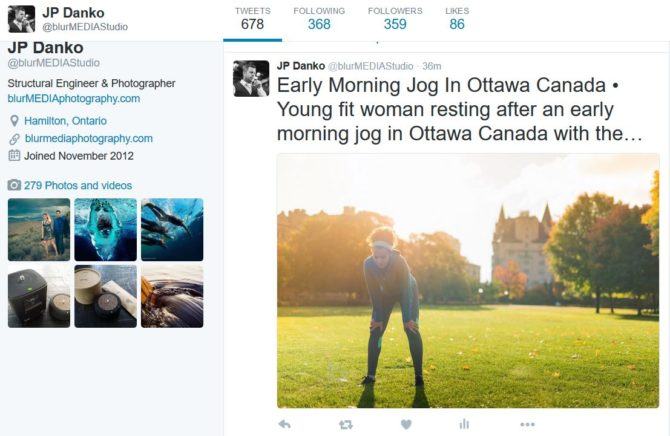 The image published to 500px has all of the exif data intact, the category you set and the tags you set in PIXBUF linked to the photo. This is not quite ideal since a number of Instagram specific tags don’t really apply to 500px – but its way better than manually uploading and tagging. 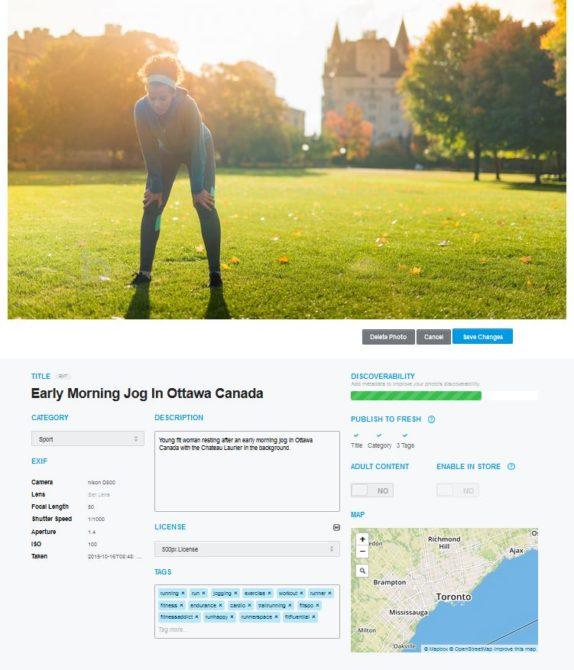 The image published to Instagram is uploaded as is – there is no opportunity to add a filter or crop. Because of this you cannot share photos that are exported in an aspect ratio that isn’t supported by Instagram – such as a panorama or a vertical 3:4. The Instagram description includes the full title, description and tags that you entered in PIXBUF. Again, if you wanted to @tag another user, you could enter that in the title or description. 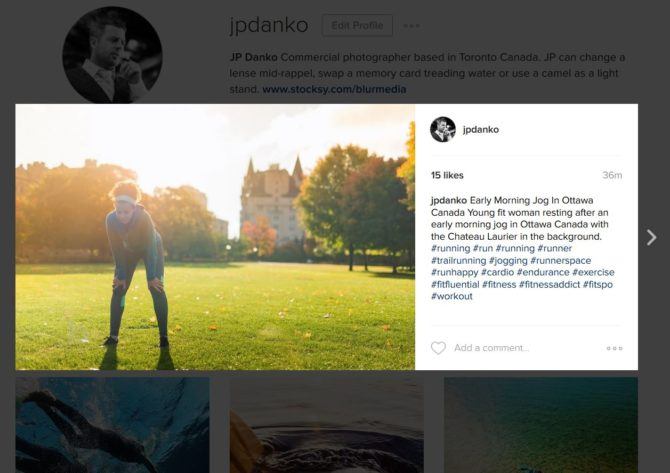 The image published to Facebook is uploaded to an album called Pixbuf Photos (if you change the name of the album in Facebook, subsequent shares will be uploaded to the same album with the new name). The Facebook images imports with the full title, description and tags (similar to Instagram).

Scheduling posts is a little weird. Once you enter the information for each photo you have an option to “Share Now” or “Add to Queue”.

Then under the post scheduler, you set the times and days of the week that you want posts to be shared to your connected social media networks. Images that are added to the queue are then shared sequentially at the specified time.

You can re-arrange the order of posts but you can’t set a specific date and time – such as scheduling your 4th of July photos for the 4th of July.

Finally, there is a statistics page so that you can see how photos are performing across your various social media networks which is pretty handy.

PIXBUF is the only social media scheduler that I have used that can effectively automate posting to 500px – which is fantastic. Scheduling social media posts for both Facebook and Twitter is fairly straight forward, although you do have to give some thought to how your caption will fit within Twitter’s character limit.

There is no function to search users or tags so you have to know what tags and users you’re going to enter ahead of time – or go to your account on a specific social media network to look someone up.

Direct scheduled posting to Instagram is against Instagram’s terms of service – so there is some risk to your Instagram account being shut down if you allow PIXBUF to post directly to Instagram (unlike Later.com which is legit). It is also a restriction that you can’t crop or add filters or other adjustments to images that you’re posting to Instagram.

I haven’t used any of the other social media networks, but I imagine the functionality would be similar.

Give PIXBUF a try and let us know what you think!

« Photographer captures time by compositing an entire day in a single image
How to use curves to fix any colour problem! »