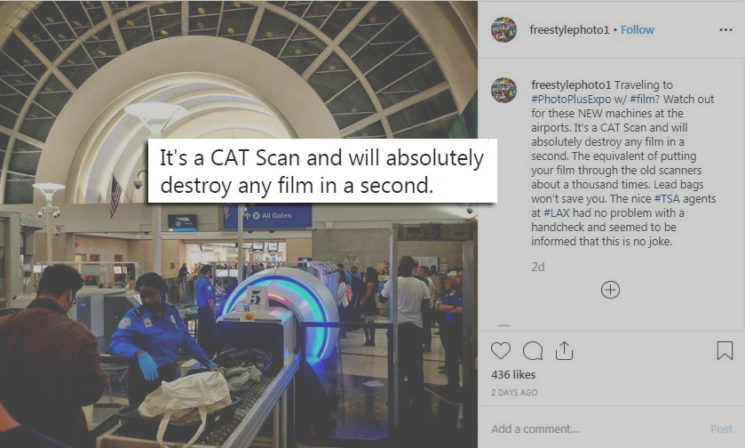 Here comes a warning for film photographers flying through US airports. Some airports are using new hand luggage scanners that will destroy your unprocessed film in just one scan. They have already been unveiled in 17 airports across the US, and there are likely more to come.

L.A. photography merchant Freestyle Photo Supplies has recently posted a photo to Instagram to warn all film photographers about the danger of these new scanners for their unprocessed film. They suggest that you should ask for a hand check rather than letting the film go through the scanner. “It’s a CAT Scan and will absolutely destroy any film in a second. The equivalent of putting your film through the old scanners about a thousand times,” the post reads, adding that “lead bags won’t save you.”

Kosmo Foto found Kodak’s warning about airport baggage scanning and its effect on the unprocessed film. Even though it was posted way back in 2003, it supports Freestyle Photo’s claim.

“There are two types of higher-dose scanners. The first type is similar to a hospital CAT scan and uses a low-dose scan followed by a higher-dose scan on specific areas of the baggage. The second type gives a high-dose, full bag scan on the first pass, damaging the film immediately.”

TSA notes that the new CT scanners have been installed at the following airports:

TSA recommends that you put undeveloped film (or cameras containing undeveloped film) in your carry-on luggage and take it to the checkpoint for a hand inspection. However, it’s worth noting that not all airports will provide you with the hand check!

It’s also worth mentioning that the new scanners won’t affect film that has already been processed (including developed medical X-rays). It also won’t destroy digital images, slides, and CDs. They only affect the undeveloped film. Considering that even the hand check is not guaranteed, the safest option is probably to process your film before flying, if you can.

Flying with gear? You may soon be able to keep it in the carry-on luggage thanks to new scanners