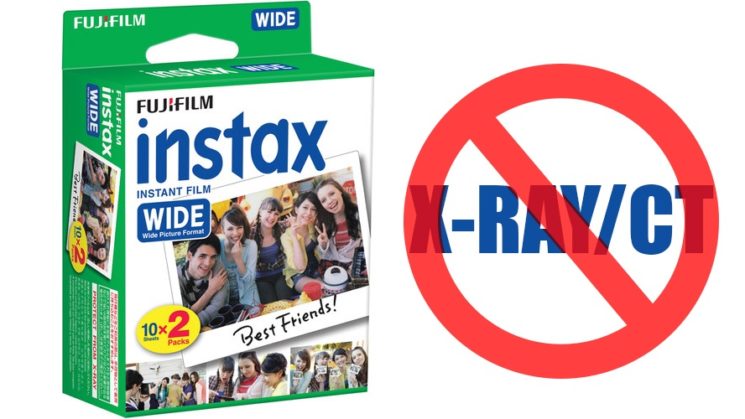 In October 2019, it was announced that some US airports would start using new Computer Tomography (CT) scanners. After a recent warning from Kodak, Fujifilm has also issued an advisory for its customers regarding these changes. The company warns photographers not to expose their unprocessed Instax and other film to new airport scanners. Along with the warning, Fuji also introduces some guidelines for handling film when boarding an airplane, because exposing it to CT and X-Ray scanners will destroy it.

In its warning, Fujifilm writes simply that “those machines may provide more damaging to unprocessed film and Instax film than previous generations of scanners.” In order to protect your film, the company suggests that you keep the film in your carry-on baggage, and always ask for hand inspection.

Other than unprocessed film and Instax film, single-use QuickSnap cameras are also subject to the potential damage. Fujifilm has released two PDF documents with more details and user guidelines for traveling with any of these products. In these documents, the company describes what the damage looks like. Note that these CT scanners at airports can cause the same damage to Instax and any other color and black & white film:

“Undesirable effects of new airport scanners on images produced by instant film that has undergone such scanning can include ‘fogging,’ distortion in shadow areas, and generally poor image reproduction after just one pass through these new scanners.”

So, in order to prevent this damage, there are some steps to follow when traveling by airplane. As already mentioned, take your film with you in the carry-on luggage and always ask for hand inspection. Fuji recommends placing the film in a clear plastic bag and showing it to TSA inspectors.

There are a few more tips for traveling with film and protecting it from X-Ray and CT scanners, and you can read more on Fujifilm’s website: