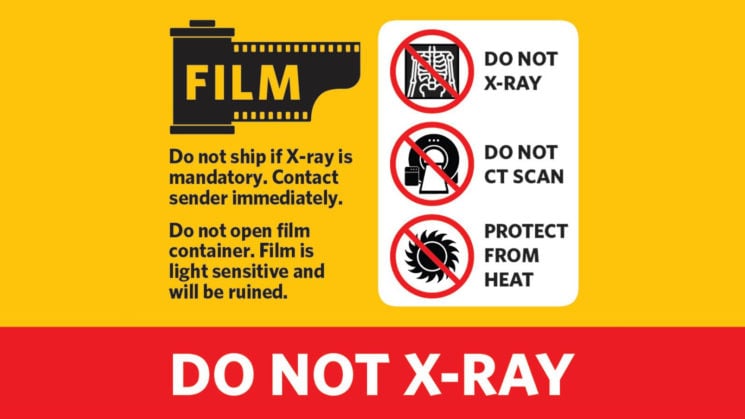 A couple of months ago, it was announced that some airports across the US had switched over from the more traditional X-Ray machines to use Computer Tomography (CT) scanners to check passenger luggage. Unlike film, which can usually handle a few x-rays just fine if it’s low ISO, CT scans will destroy pretty much any film almost instantly.

With this technology set to expand to at least 145 airports in total, Kodak has posted an advisory to Facebook with some guidance on travelling with film. They actually did some testing with Portra 400 and the CT scanners in cooperation with the TSA to see exactly what kind of effect it had.

Of particular interest here are the tests Kodak performed with Portra 400 35mm film. They ran rolls of the film through the CT machine from 1 to 10 times. Then all of the rolls were developed and tested at the Eastman Kodak Research facilities. Kodak says that there was already “significant film fogging” after just a single run through the machine. As with X-Rays, higher speed film will also be more sensitive to the CT scans. When it comes to lower speed film, they say that a roll of ISO100 film would possibly show less degradation, but they still highly recommend against letting it go through the new CT scanners.

As many of you know, the United States Transportation Security Administration (TSA) has recently been installing Computed Tomography (CT) scanners for carry-on luggage in US airports. In the coming months these scanners will be operational at 145 airports in the US. CT scanning technology has been used for checked luggage for many years, and Kodak Alaris and Eastman Kodak have warned photographers not to check their film, but rather to carry it on and request it be hand-checked by TSA agents at Security.

To better assess the risk to film from the new carry on scanners we brought a small quantity of Portra 400/135 to John F Kennedy Airport in NYC. With the help of TSA representatives the film was put through the new carry on CT scanners from 1-10 times. The film was then evaluated at Eastman Kodak Research facilities. The initial results are not good. Just 1 scan shows significant film fogging, leading to smoky blacks and loss of shadow detail. This will be more significant for higher speed films. Although it’s possible that a roll of 100 speed film would show less degradation, we strongly recommend against putting any unexposed or exposed but unprocessed film through a CT Scanner.

We reached out to the TSA to ask what options there might be to warn passengers. We originally asked if it would be possible to add signage at airports that utilize CT scanning technology. We are developing warning stickers that can be placed on your film. These will be available in a label format so they can be printed on your in-home or in-office printer. Just attach the label to the plastic bag as described in the TSA description below.

The TSA did tell us that all TSA screeners are trained to hand check roll and movie film as well as single-use cameras. Sheet film in boxes may require more diligence on the part of the photographer.

If you are traveling with the following types of film, please pack it in a clear plastic bag, remove it from your carry-on bag at the checkpoint, and ask for a hand inspection:

At the moment, the US airports which currently implement CT scanning technology are the same seventeen as those reported in October.

But the use of CT scanners is expected to expand into 145 airports across the US in the coming months.

Condensed down into the simplest advice possible, always carry any undeveloped film with you in clear plastic bags. Never put it in checked luggage. And always ask for a hand check instead of having it go through a machine.