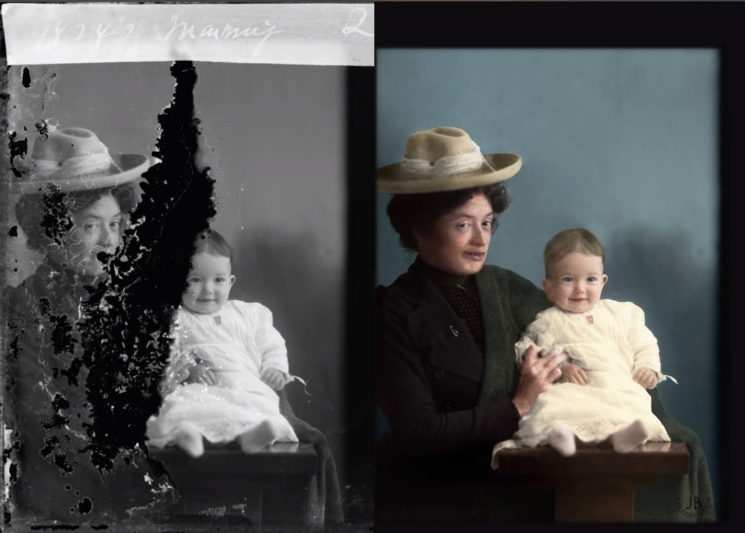 Photo restoration and colorization gives new life and new dimension to damaged old photographs. A recent video from James Berridge of JBColourisation shows just how impressive this process can be. He used a heavily damaged diptych of mother and her baby from circa 1903, with the damage splitting the image apart. In his timelapse video, you can see how he fixed it and “reunited” the mother and her child after 116 years.

James found the original image on the Library of Congress’ website. The glass negative was created between February 1901 and December 1903, and both pictures are badly damaged. James says that he wanted to work with this photo for a long time, and there were two reasons for it. The first one was purely emotionally-driven: seeing this particular photo in this state made him sad. And second, he wanted to take the challenge of restoring a photo that was damaged this badly.

It took James a painstaking amount of work to both fix this damaged photo and colorize it. What you see in 15 minutes of the video is 20 hours of work over the course of one month. Although James doesn’t usually work with photos damaged this much, he took the challenge to fix this one and give her a new life, and he did an amazing job.

I personally enjoyed this video very much, but not just because it shows the masterful restoration and colorization work. That certainly is impressive, but I also enjoyed James’ stories throughout the video, which definitely adds to it and makes you watch till the very end. So, make sure to watch the entire video, and give James a follow on Instagram, YouTube, and Facebook to see more of his work.