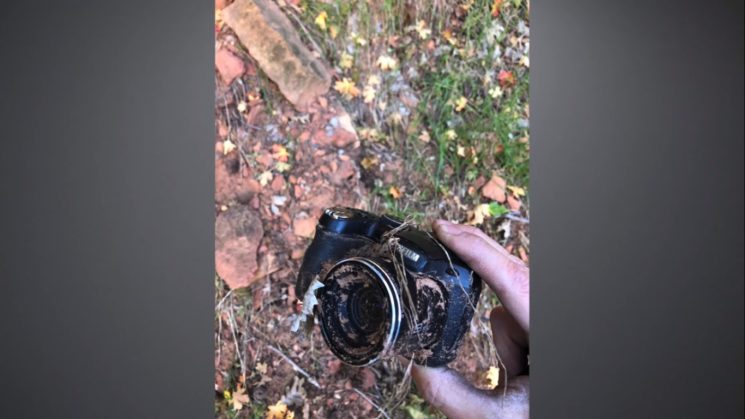 During his recent visit to Zion National Park, New Zealand photographer Luke Riding found a broken camera that clearly fell from Angel’s Landing trail. Falling from almost 1,500 feet, the camera was smashed. However, the memory card was intact and Luke managed to see the photos taken back in 2016. Thanks to his friend Ben Horne and the power of social media, the camera was reunited with its owners in just over 12 hours!

Luke visited Zion back in October 2018, Ben explains on his blog. After founding the broken camera, he reached out to Ben to help him find the owners. Ben posted a tweet with photos, but he was out of luck. So on 20 February, he published a video on his YouTube channel in an attempt to track down the camera owners. He shares some details, the photo of the camera, as well as some of the images from the memory card which show two girls hiking.

Shortly after Ben posted the video, someone shared it on Reddit. And not long after that, Redditor Crawfordpd commented: “I am 99% sure I know those sister[s]! I’m checking their Facebook pages with the full res photos to confirm. I’ll message you their details if I’m correct.” As you probably may guess – this is when the owners were found!

Crawfordpd wrote in the comments that the girls in the photos are sisters from his hometown. He went to school with one of them, so he reached out to her on Facebook to confirm that it was her camera. She responded that it belonged to her sister and they got in touch with Ben, who explained what happened in a follow-up video.

The camera owner’s name is Sarah and she told Ben that she and her sister were on a hike in June 2016. There’s nothing spectacular about how the camera ended up at the base of Angel’s Landing: the two sisters took a lunch break and one of them accidentally bumped it and sent it over the edge. But what is spectacular is that the memory card survived almost three years there. And that the owners were found only 13 hours after the video was posted.

There are a few more incredible stories of cameras that got reunited with their owners. Sometimes it took years (as many as ten years), sometimes it took miles, or crossing the seas. But in each case, we can see the power of the internet and social media in action. But I think that these stories also show the power of people, their kindness, and determination to do something good for others.

Zion National Park will allow tripods on some trails after all