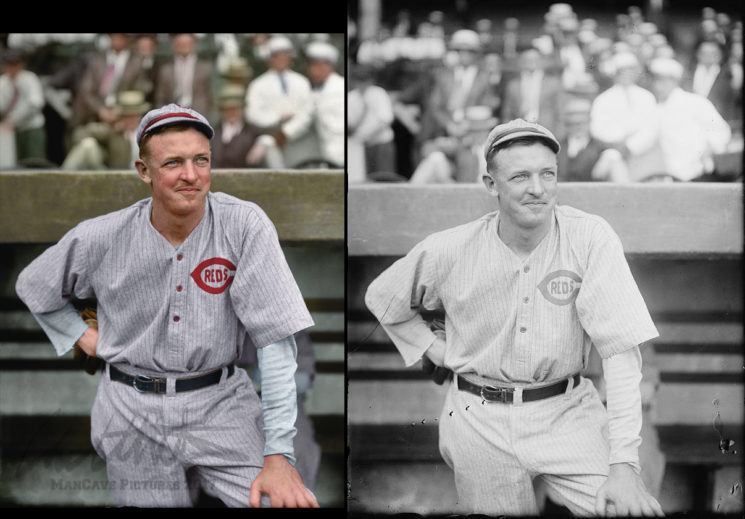 We’ve shown you some amazing colorization and restoration work before. But if you are a baseball fan, you will definitely love the series we’re about to show you today.

Chris Whitehouse is a sports lover and a photo restoration and colorization artist. He brings his two passions together, and as a result, he breathes a new life into century-old photos of Major League baseball players and games. Using Photoshop and lots of patience, skill, and research, he teleports us to the baseball fields from 100 years ago and creates a new look on the history of sports. 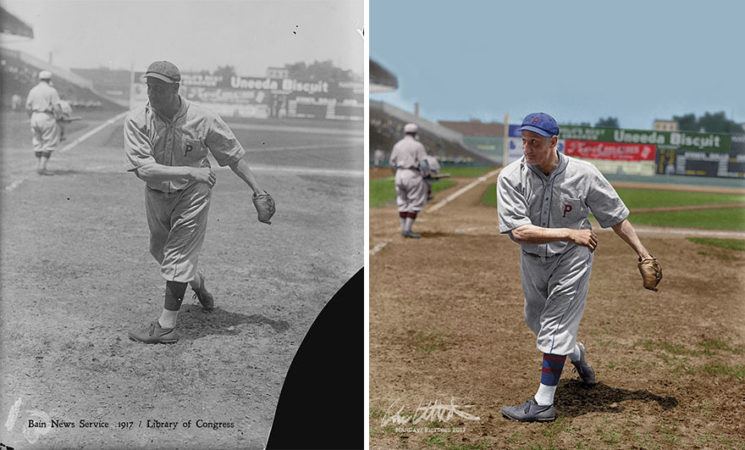 While Chris uses Photoshop to recreate the images today, he says this hobby of his began 35 years ago, way before Photoshop even existed. In an interview he gave to Uni Watch, he shared that he began doing photo restoration in the 1980s, while he was still in college. His first digital colorization was a photo of his dad sitting in his jet in Korea. He was pleased with the results, so he went on doing it with other photos, mostly old ones from the family album.

Even though Chris is American, he’s been living in Far East, Thailand and Hong Kong since 1983. The roots of his Photoshop skills are in Hong Kong. He used to make video games there, which gave him a solid knowledge of the software. Thanks to this, he found the digital restoration work easy to master. Paired with his previous experience in photo restoration, no wonder his baseball images are brought back to life with such great results. 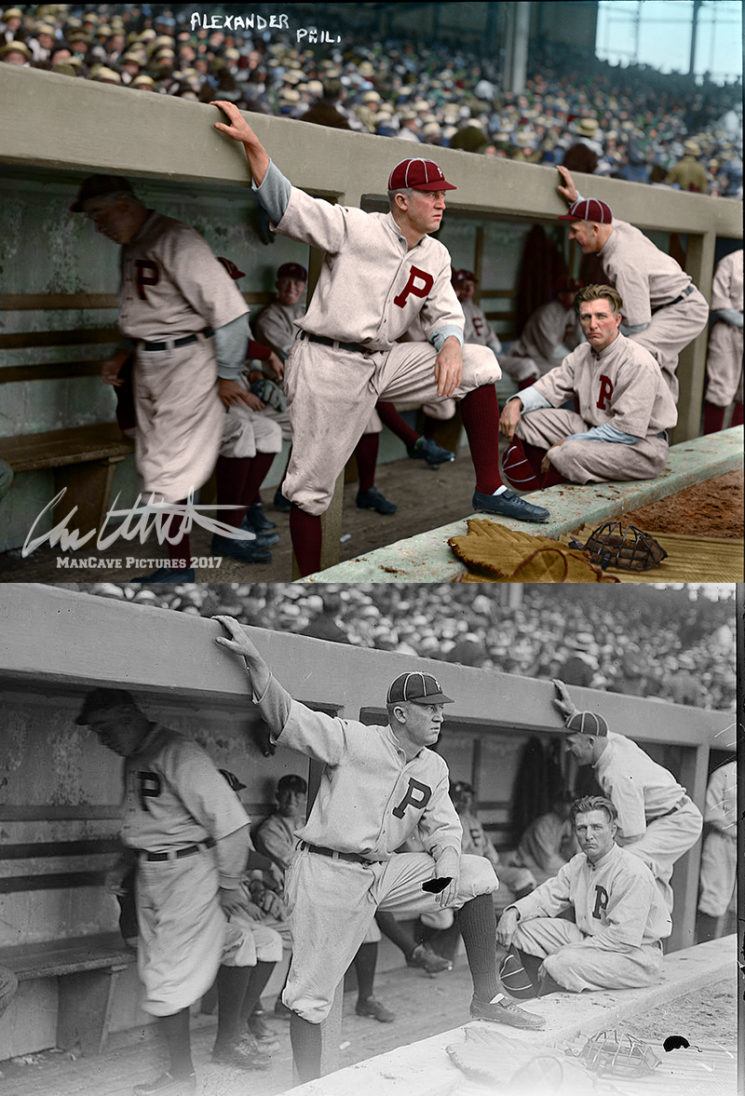 When it comes to the colorization and restoration process, Chris points out that he couldn’t imagine doing his work without the Wacom pen and tablet. I am a colorization newbie, and one of the tips Chris gave me is to buy the pen and tablet as soon as I can. As he says in his post on Bored Panda, finishing one photo can take more or less time, depending on the image. Sometimes, a portrait of a player can be done in a single day, if it’s in a good condition. With photos of entire teams or those in bad condition, it can take several weeks or as long as a month. But even when the task is easy, it still takes some preparation, education and research. 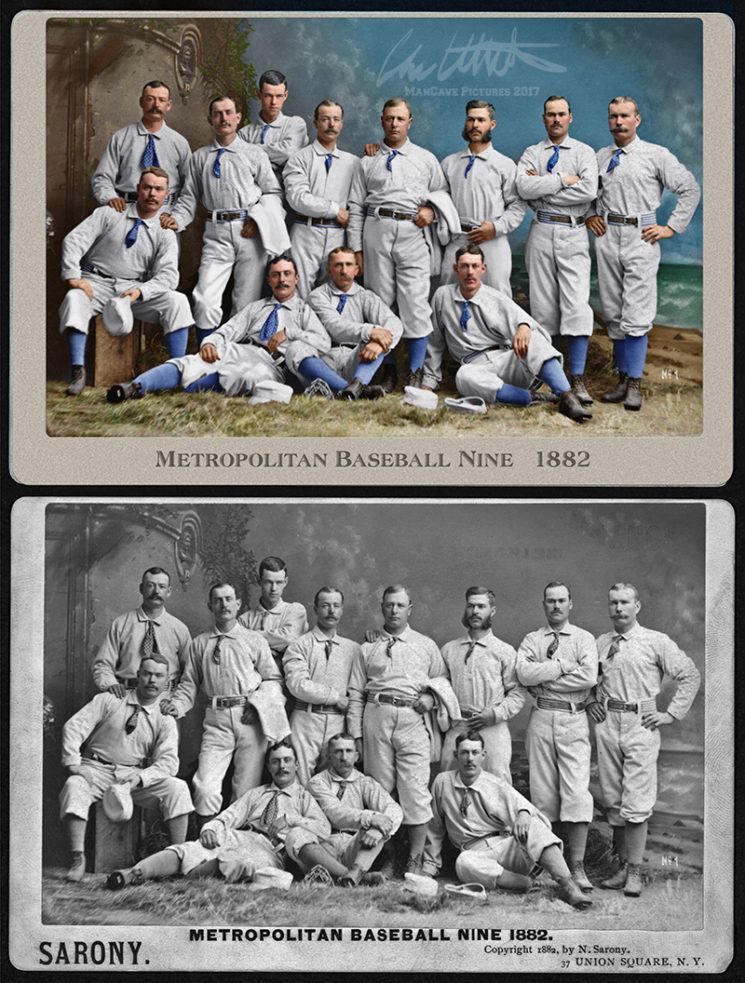 Like every good colorization artist, Chris tries to find the historical facts that will make the colors in his photos as accurate as possible. He uses a website for baseball uniforms where he can get a lot of information. Parks are more difficult to work on, but he says that sometimes old color postcards can give you an idea. Since the players and the uniforms are the most important, Chris concentrates on getting them right. Since the colorization work is done in many layers, he goes back and fixes colors whenever he finds more info. 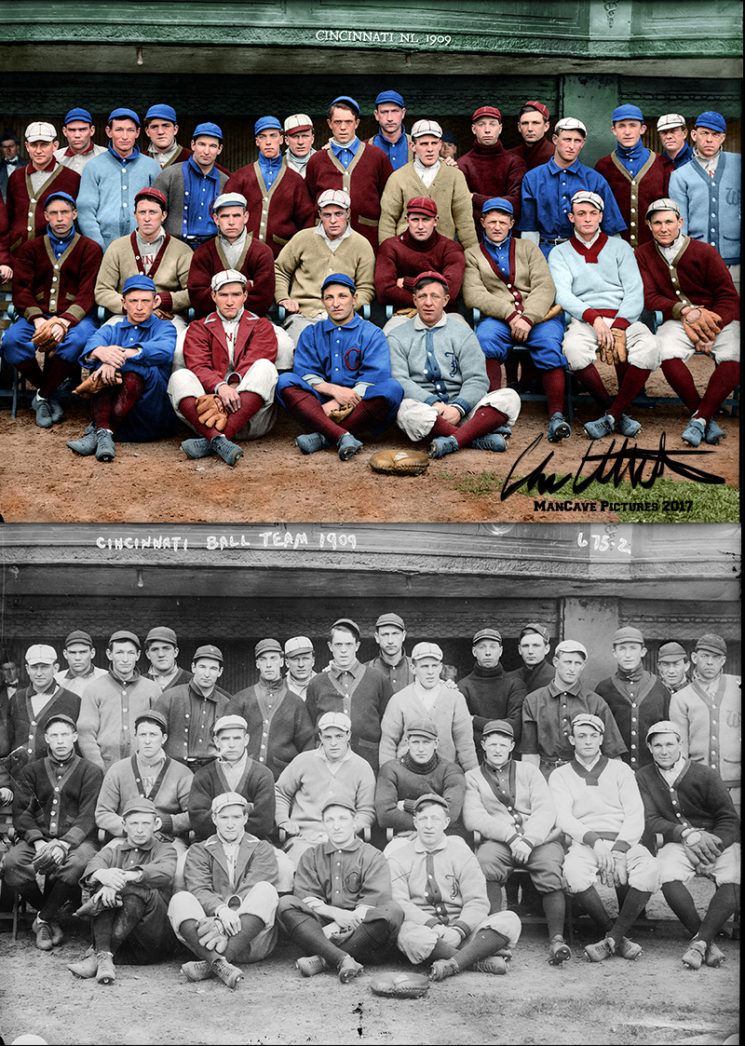 The Cincinnati Reds in 1909 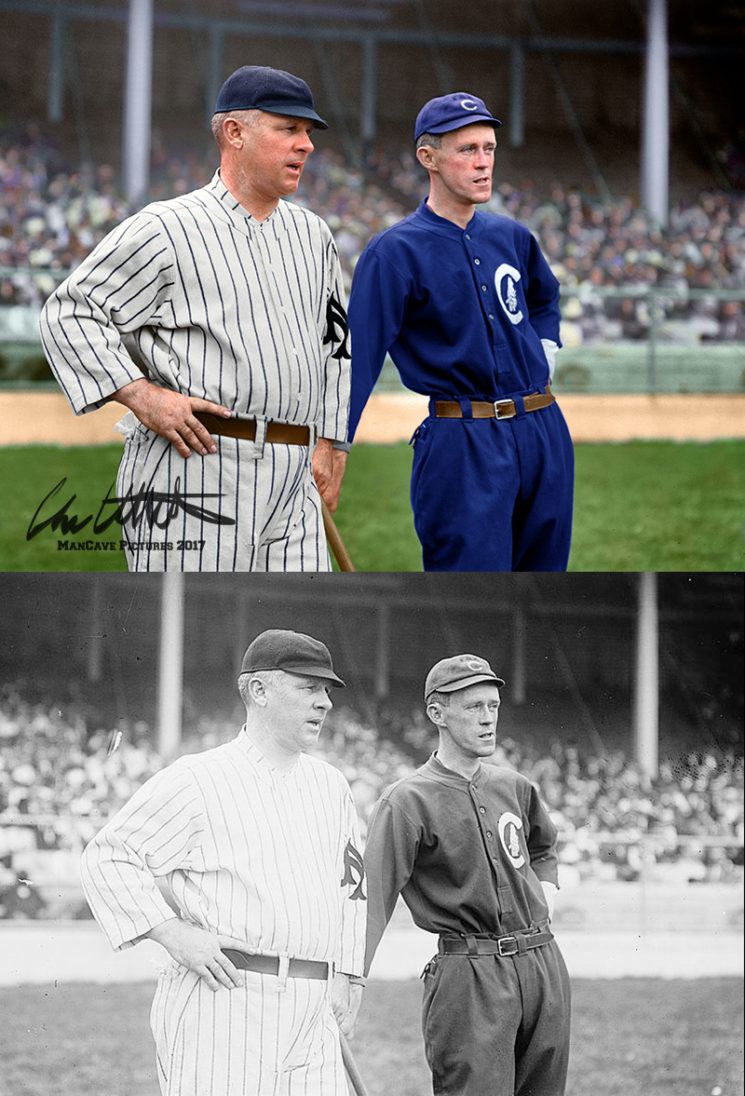 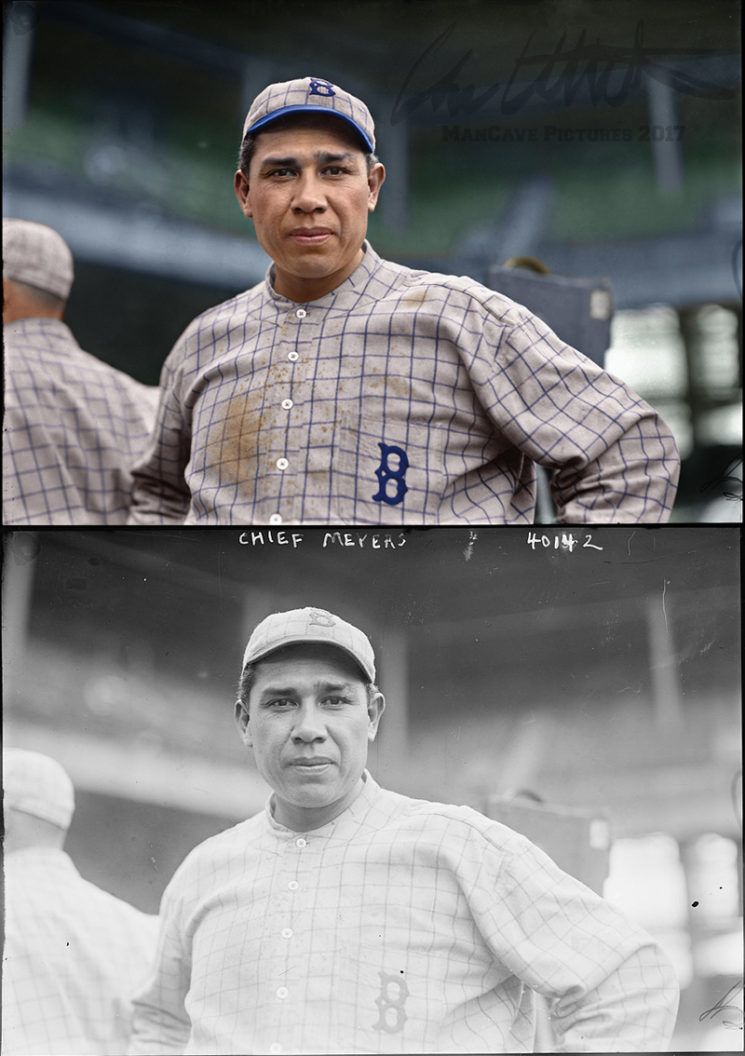 Brooklyn Robins, 1916, with manager Wilbert Robinson behind. him 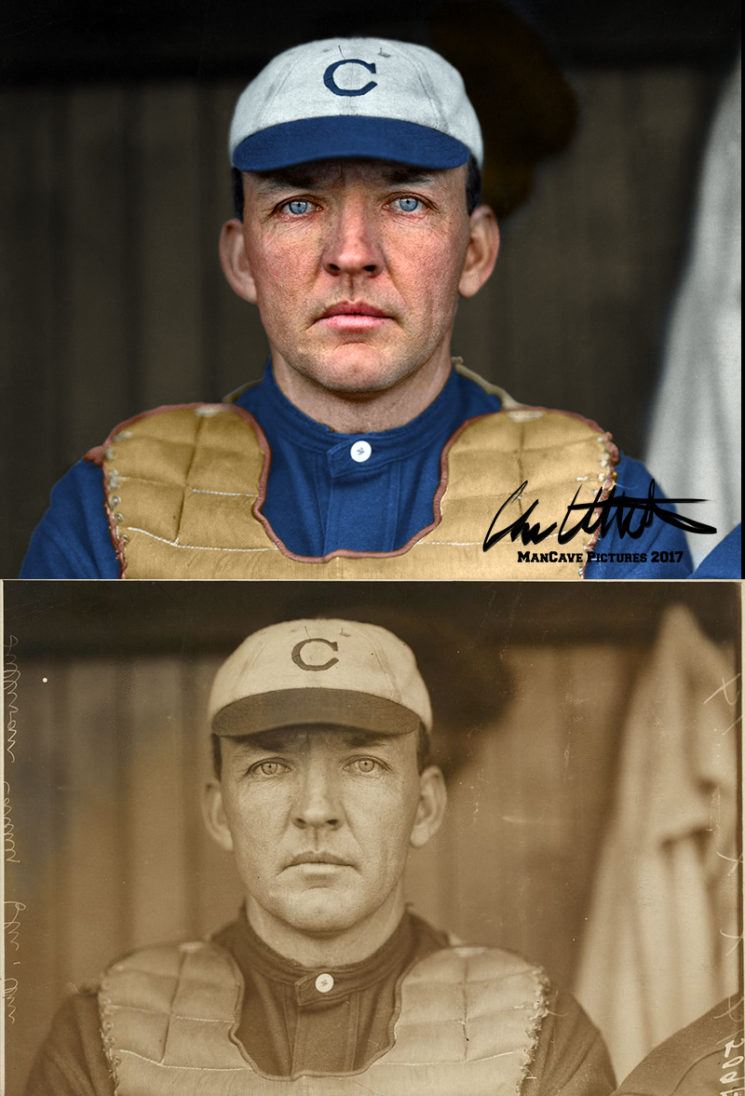 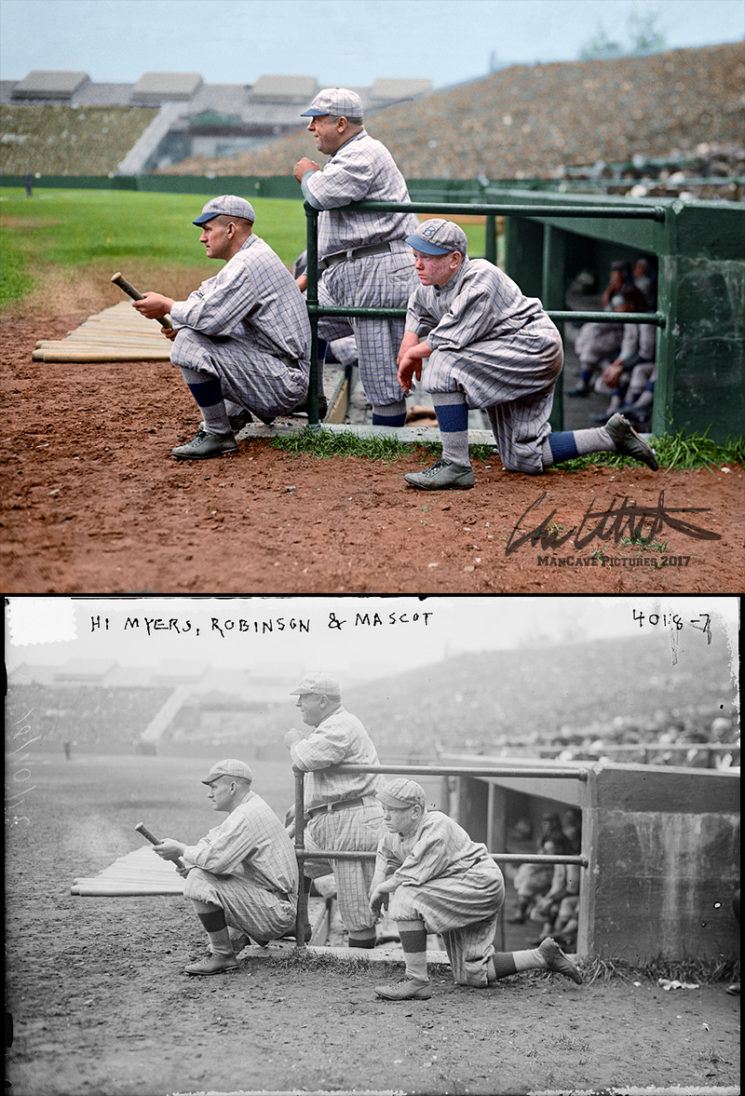 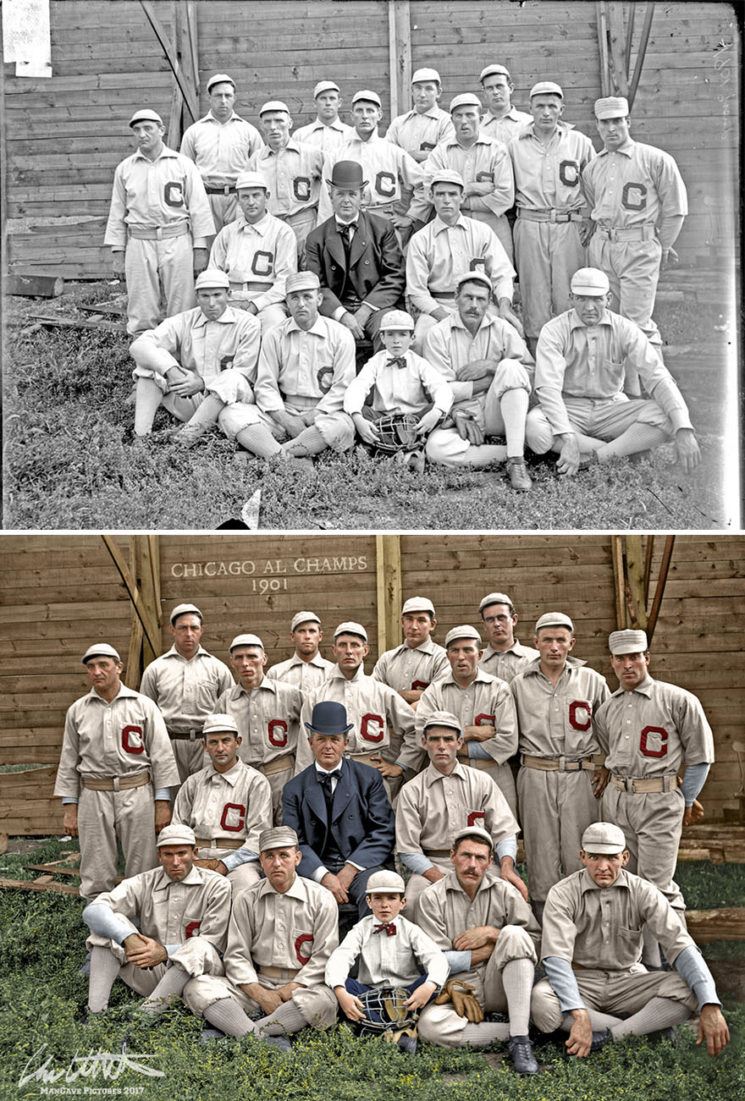 For Chris, photo colorization started as a hobby, but he’s doing it more and more professionally. He runs a website called Man Cave, where you can see more of his work and buy museum-quality prints. So if you’re looking for some awesome baseball posters to decorate your man cave, you know where to look. And I’d like to thank Chris for sharing his work with us, as well as some tips and tricks about the entire process.