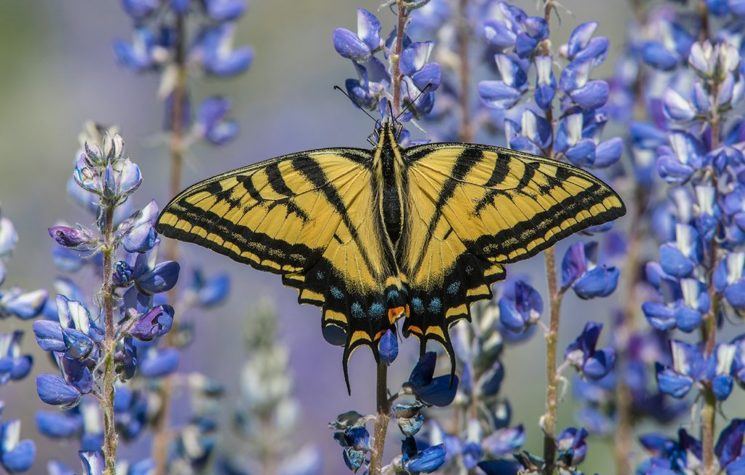 Every year, on the cusp of true, Rocky Mountain summer, I travel to the high country to photograph butterflies. For a brief couple of weeks, during the height of the alpine meadow bloom, when lupine and mallows turn acres of open space to blue and pink, Montana’s butterflies make the most of their short season.

This year, I test drove Nikon’s flagship dx camera, the D500. I ran it with Nikon’s 300mm f4 PF VR and the TC-14E III, giving me a whopping 630mm of reach, hoping to bring these colorful insects up close and personal and preserve more depth of field than when shooting with my 200mm Micro Nikkor, my usually choice for butterflies.

I shot entirely hand held at ISOs ranging from 100 to 500, and, depending on just how much I wanted to lose the background, kept my aperture either wide open at f5.6 or stopped down to f8. Most of my subjects were within a foot of maximum close focus distance – 1.4 meters, according to Nikon – and lighting ranged from bright sun to medium cloud cover. I used single-point focus exclusively, and generally ran average exposure metering, often with -.3 exposure compensation.

My first impression, after taking a little time to simply look around and remember just how beautiful Montana’s mountain summers are, was that this camera/lens combo is light. I mean really light. Even with my Nikon MB-D17 external grip, I never felt like I was carrying more than my 24-70mm f2.8. I had the power of a very serious telephoto packaged in something sized for landscapes.

There are many great technical reviews of this camera and lens, most of which offer excellent information. For what I do – photographing nature in all kinds of different environments – all I care about is real-world results. Test charts are great, but I’ve yet to see one at 9,000 feet in the Rockies. That said, and understanding that criteria like sharpness and bokeh are rather subjective and often as much related to the user as the equipment, I approached this from the simple angle of whether or not it would work for me.

With literally millions of flowers to choose from, I rarely see a butterfly spend more than a few seconds on a particular blossom. Fast focus is a necessity, and the D500’s much-touted autofocus didn’t disappoint. The teleconverter did slow focus acquisition down a touch, especially the closer my subject was. It was never slow, but it did hunt periodically. Not enough to be annoying, but there were a handful of shots I missed. I used back button autofocus, and found this a great way to continually track the erratic movements of a butterfly on a flower. When focus was acquired, it was locked like a heat-seeking missile. The camera and lens didn’t miss then, period.

Depth of field was definitely much greater than with my macro, especially when I stopped the lens down to f8. I was impressed that I could, even at 5 or 6 feet, generally keep sharp focus on the vast majority of all wings on the butterflies. That’s saying something with as much focal length as I carried. When I moved back a few feet further, shooting from closer to 10 feet, f8 resolved perfect focus across nearly all butterflies, and the 20.8 megapixel sensor of the D500 captured enough detail to allow quite heavy cropping with excellent results.

This long-tailed tiger swallowtail was a little over 15 feet away, and a heavy crop shows detail that works for me seven days a week. 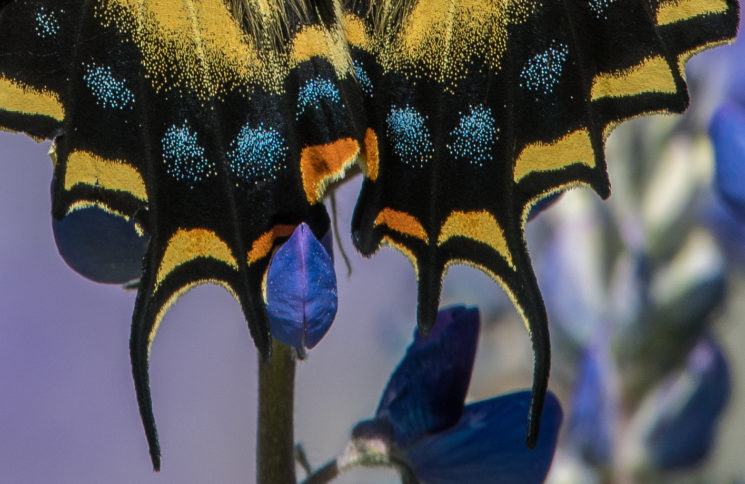 I’m not a bokeh connoisseur, but I loved the way this lens made backgrounds disappear. Even stopped down I didn’t find them cluttered, and when left wide open it was pure magic. This great spangled fritillary finally gave me a broadside shot, and f5.6 really put the focus just on him. 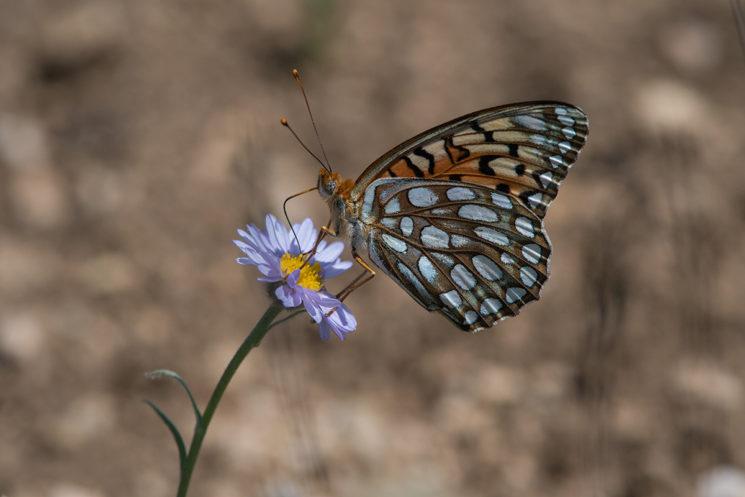 Wanting to incorporate a Monet-style swirl of colors around this spring azure, it was as easy as opening up the aperture and waiting for a pose I liked. 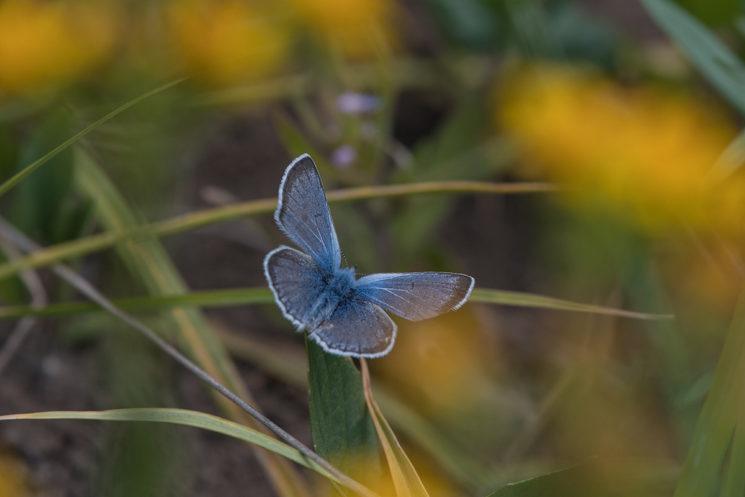 When a painted lady landed close enough so that I had to lean back to focus, f8 gave me insane detail of her lower wing behind the eye while blurring just a touch of upper wing. 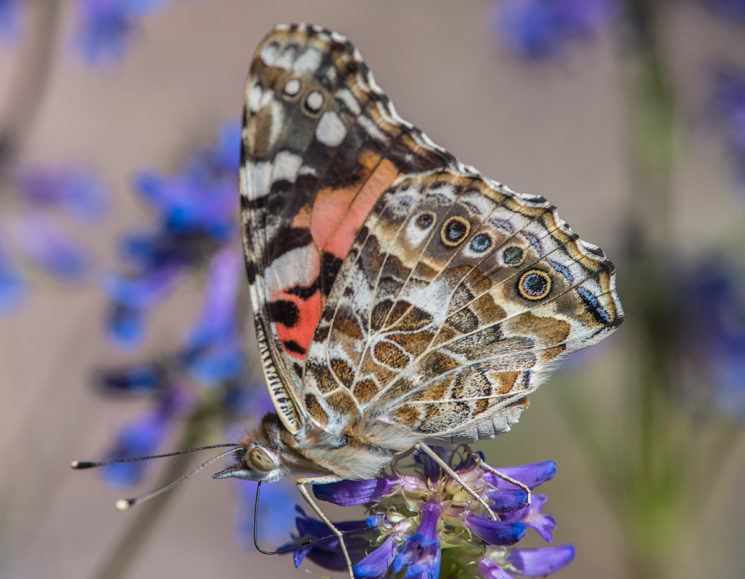 And anytime patience paid off with a fritillary going nearly horizontal, the lens held beautiful focus across the whole insect. 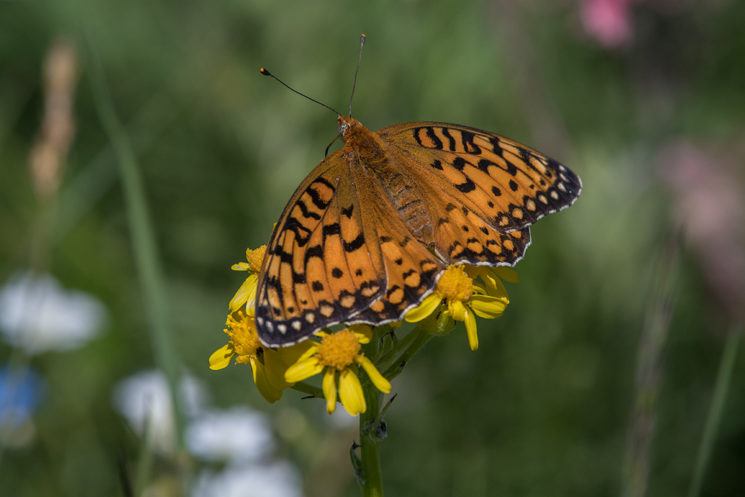 Over the course of the morning, I walked the better part of three miles and never felt any strain from the camera, which I carried around my neck on Nikon’s supplied strap.

If I was going to do it again – and there’s 100% chance that I will – I’ll bring a tripod for shutter speeds below 1/500. The camera is so light, and I’m so often unable to take a sitting position when shooting butterflies, that overall sharpness would benefit from having a sturdier platform than I can produce when shooting slower than this. Nikon’s VR worked as advertised, and with shutter speeds at 1/640 and faster, I’d be hard pressed to find much benefit from a tripod. Still, if I was going to blow some of these images up toward 20×30, I’d vote for being steadier. It’s never a bad choice.

As the day wore on toward afternoon, I found a damp area where some of the last of our winter’s snow was melting. Spring azures were stacked in like miniature morphos, giving me another opportunity to test depth of field. I’m sure I could quantify it more scientifically, but I was often able to get several of these diminutive butterflies in sharp enough focus to create a pleasing picture, at least to my eye. 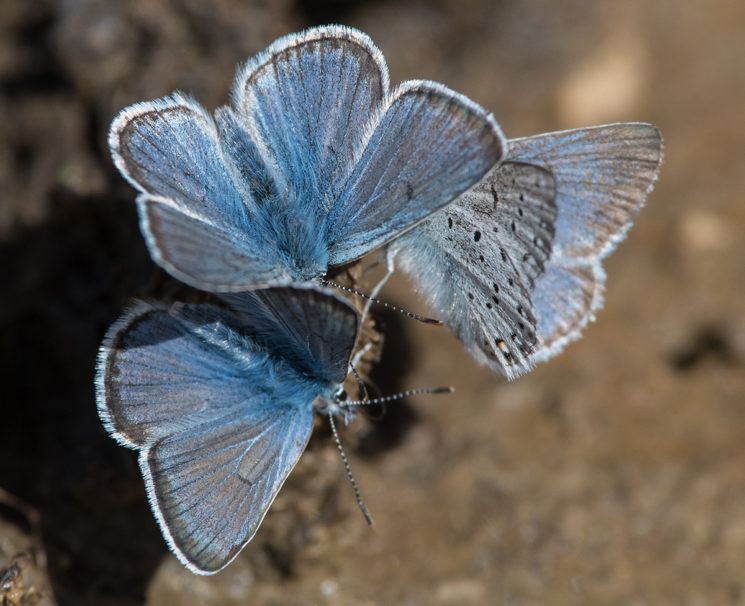 Stop down a little, and again, focus goes right exactly where I want it. 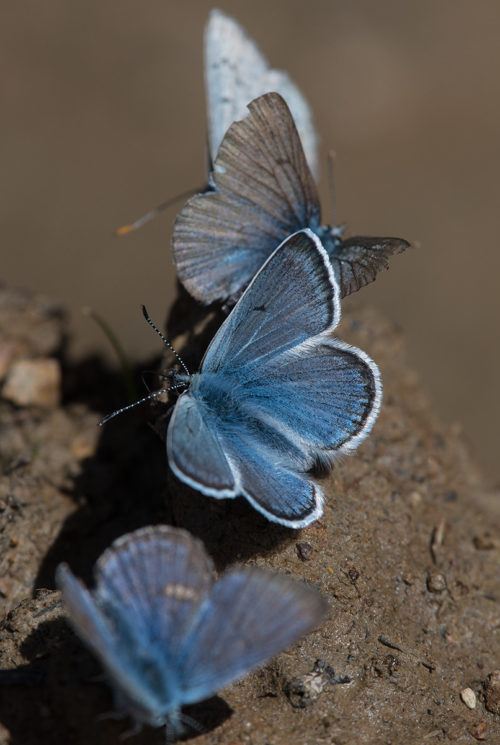 Like Montana’s short summer, my day didn’t last nearly long enough. As evening approached and I began winding my way back to my pickup for the inevitable drive to civilization, moths began their quest for nectar. This one, shot at too slow a shutter speed to freeze its frantically-beating wings, reminded me of something from an early, discarded Star Wars set, tiny flecks of pollen visible on its proboscis. I watched it drink then veer crazily away toward the west and a sun sinking fast toward the horizon. 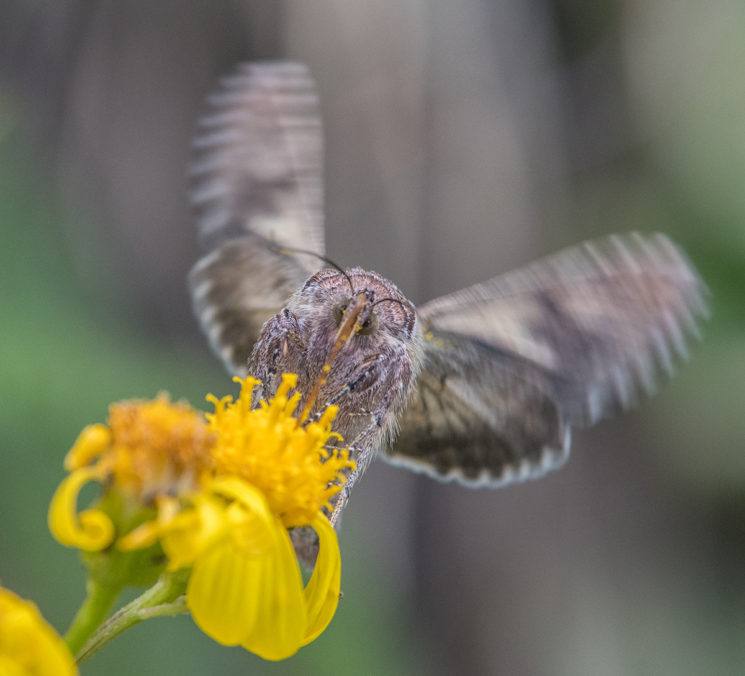 Just before I reached my truck, Montana left me with a prettier image when a lone little blue landed for an instant on a dandelion gone to seed. It paused only long enough to be aware of its mistake, but I caught it there. My shutter clicked, and then the butterfly and the sun vanished together. Somewhere overhead, a night hawk’s wings buzzed and a breeze rippled the grass before me. Like most days in the field, this was a good one, made better by the results of Nikon’s D500, 300mm f4 VR, and the TC-14E III. It’s a combination I’ll be using time and time again for butterflies. 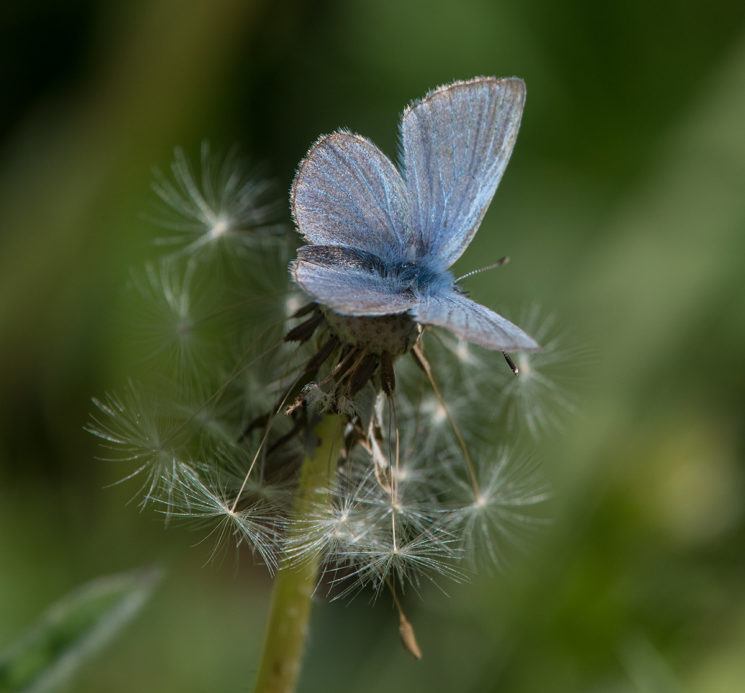 Jake Mosher is a wildlife and landscape photographer based in Montana. Jake has written for the New York Times, Outdoor Life, a number of other magazines, and published a couple of novels. You can find out more about Jake and his work on his website, This article was also published here, and shared with permission.