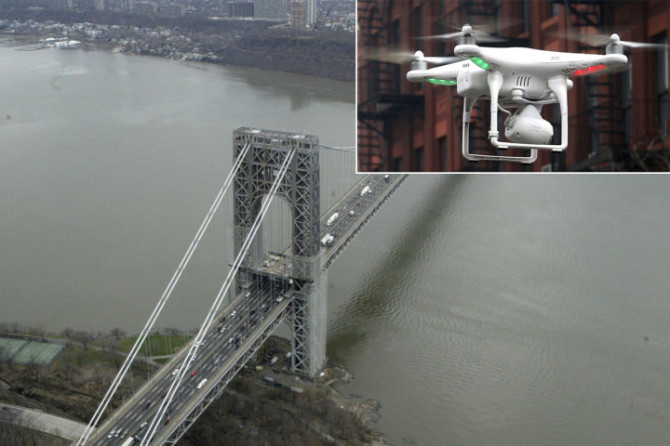 At about 12:15 midnight, Remy Castro and Wilkins Mendoza were flying their two quadcopters over George Washington Bridge in New York; at the same time, an New York Police Department chopper was present and patrolling the area – the two remote controlled quadcopters were headed straight for it. Luckily, the NYPD officers present noticed the two of them, and had to divert the chopper’s direction to avoid hitting the two of them.

Had one of the quadcopters hit the propeller of the chopper, things could have gotten ugly. There were a number of ways things could have gone wrong in this situation, and it shouldn’t be happening in the first place if we expect to be able to keep our right to freely use quadcopters in the US. If you follow this website at all, you know our stance on photography and how it relates to the law; but as supportive as we are of the right to use these devices, we can’t be surprised when regulations get put up because of things like this.

The two men that manned the quadcopters were immediately arrested after the NYPD traced the flying devices back to them. And even after they were taken in, they spewed out dialogue that was nothing short of immature and inexcusable. One of them told the Criminal Court that it was “just a toy” and that they “were just playing with it“.

I made a promise earlier on that I won’t refer to quadcopters as drones anymore. It does nothing to improve the image of quadcopters, and it gives it a bad undertone already, given the current political climate. We need to be able to help authorities understand aerial photography, and how we use quadcopters. We need to be able to show them that it’s not as bad as they think it is. And that’s exactly why we should take the two guys here as an example of how not to present ourselves when controlling one of these devices. Right now, this story’s about to go viral, and the word “drone” is about to get a lot more buzz. People love to read controversy, and none of that will help the quadcopter’s image.

Look at the title of this post. Because it has the word “drone” in it, more people are going to click it. Because the men acted “in the most immature manner” possible, more people are going to read what that manner could be. And whatever reputation these flying devices hold will worsen because of every website that jumps on “DRONE”. Let’s try not to give people another reason to have to use that word for quadcopters again.