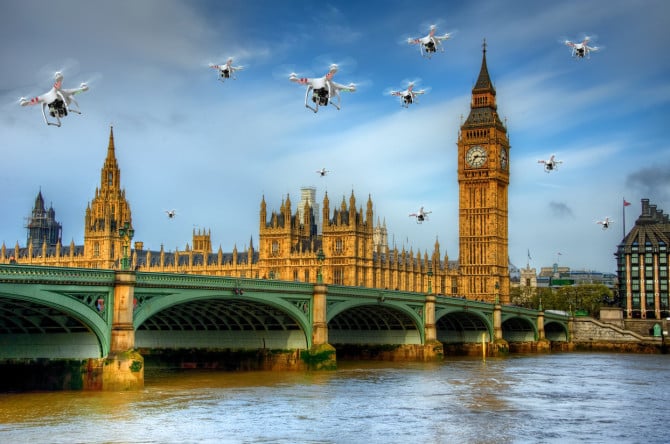 UAVs or Drones or Quadcopters or any other name you would like to give cameras mounted on radio controled helicopters are getting increasing attention from both citizens (as opposed to photographers ;) ) and regulating authorities. We’ve had a UAV (Unmanned Aerial Vehicle) abandoned in St Luise after breaking the height limit allowed for aerial activity, and Yosemite National Park banning drones altogether.

The UK is taking a proactive approach making it absolutely clear what is and is not allowed when flying a UAV. British CAA (similar to the US FAA) released a Small Unmanned Aircraft Operations Within London and Other Towns and Cities last month, which makes it crystal clear that while some activities using UAVs are OK, some require license or are simply forbidden. 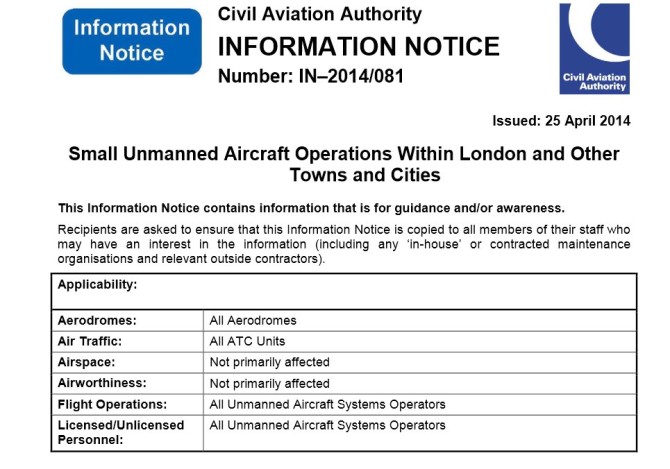 Some things that we took for granted are turning illegal, FPV (First Person View – which allows you ‘see’ what the aircraft sees) can not be used for controlling of monitoring the UAV:

166(3) The person in charge of a SUA must maintain direct, unaided visual contact with the aircraft sufficient to monitor its flight path in relation to other aircraft, persons, vehicles, vessels and structures for the purpose of avoiding collisions.

And of course, you need a commercial license to do any sort of commercial work with the footage or photos:

166(5) The person in charge of a SUA must not fly the aircraft for the purposes of aerial work except in accordance with a permission granted by the CAA.

In fact, it may not even be legal to take photos at all:

Aircraft operators and pilots should be aware that the collection of images of identifiable individuals, even inadvertently, when using surveillance cameras mounted on a SUSA , may be subject to the Data Protection Act. As this Act contains requirements concerning the collection, storage and use of such images, SUA operators should ensure that they are complying with any such applicable requirements or exemptions. Further information about the Data Protection Act and the circumstances in which it applies can be obtained from the Information Commissioner’s Office

The person in charge of a SUSA must have permission from the CAA to fly over or within 150 metres of any congested area;

There is more where that came from, you can read the entire regulation here.

Now, I wonder if Canada and the US are going to follow suit.

[Small Unmanned Aircraft Operations Within London and Other Towns and Cities, Thanks for the heads up Tomer, Illustration based on Jim Nix photo]

« IT Director By Day, Photographer By Night, John Wilhelm Gives His Daughters The Ride Of Their Lives
DIYP Interviews The Amazing John Flury »