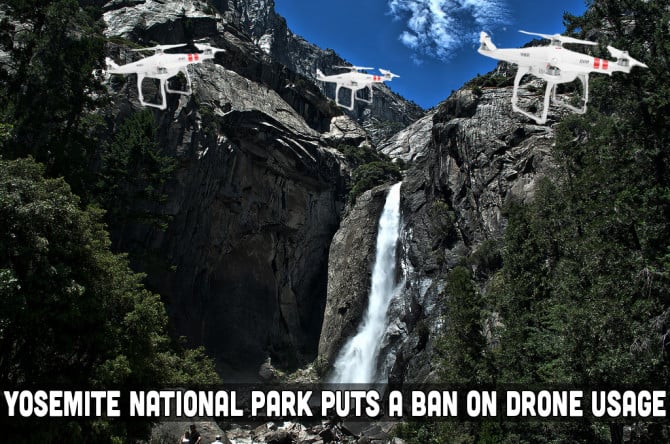 It seems that the next battle on photography is about drones. Between photographers, videographers, police, FAA and courts, this battle is still wide open.

The last swing is coming from an unexpected participant – the US National Park Service (NPS). In a plainly titled notice – Use of Unmanned Aircraft Systems (Drones) Prohibited in Yosemite National Park the NPS issued a notification that use of drones is prohibited while visiting the park.

While also addressing the legalities (or lack there) of using drones within the park perimeter, the NPS is also concerned with the safety and enjoyment of both park visitors and the wildlife living in the park

The park has experienced an increase in visitors using drones within park boundaries over the last few years. Drones have been witnessed filming climbers ascending climbing routes, filming views above tree-tops, and filming aerial footage of the park. Drones can be extremely noisy, and can impact the natural soundscape. Drones can also impact the wilderness experience for other visitors creating an environment that is not conducive to wilderness travel. The use of drones also interferes with emergency rescue operations and can cause confusion and distraction for rescue personnel and other parties involved in the rescue operation. Additionally, drones can have negative impacts on wildlife nearby the area of use, especially sensitive nesting peregrine falcons on cliff walls

This is an interesting development as more and more cases of drones either being taken down or discouraged by the authorities.