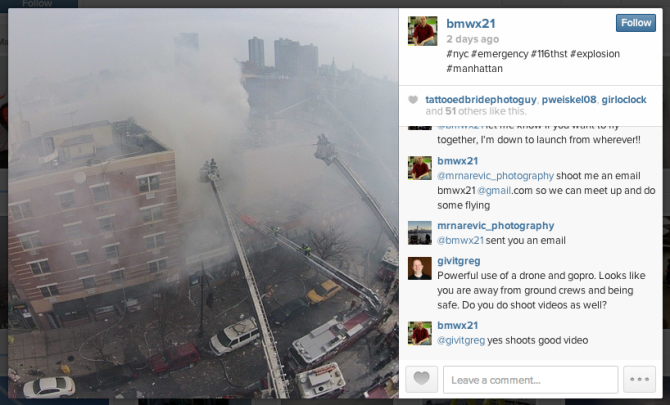 On Wednesday, Harlem’s community suffered tremendously when a gas leak explosion brought down two apartment buildings, killing 8 people and leaving over 70 injured. The NYPD was again faced with the task of digging through rubble to find any signs of survivors in a demolished area, bringing back memories to many people of what happened back on 9/11. A bizarre incident, however, did manage to make an appearance in the midst of everything when one photographer, Brian Wilson, caught some attention for his camera’s setup; it was on a flying drone.

The flying drone, a DJI Phantom 2 quadcopter, managed to take a (pretty well done, might I add) aerial shot of the debris from the explosion that morning, and the photo was posted to the photographer’s Instagram account. It wasn’t, however, until the drone caught the attention of the NYPD that things got slightly controversial. I take that back; it already started turning heads of other people before it got noticed by the police, and even the people themselves got worried.

Brian Wilson was then ordered by the police to bring down the drone, with which he complied (with some disappointment). Considering there aren’t really laws set in place in New York that tie restrictions down yet on drones being manned by the public, his actions were seen as forgivable enough.

Did the police act wrongly in the situation? Were they infringing on the rights of this man like many other police have been caught doing when forcing people outside perimeters to turn their cameras off? Let’s look at the context of the story, which unfortunately tends to get lost in sensationalism. Before you go on, keep in mind that the photographer did talk to a few officers before launching his drone, and was compliant with bringing it down when requested. The following is an argument in response to those who think the police acted wrongly here.

At the time the drone was noticed, there weren’t 8 people known dead from the explosion. That meant that time was quickly running out for emergency services as they searched for signs of anyone trapped in the damage; they had to act fast. A drone in the air is out of the way when it comes to photography, but what could have happened had it lost power? With authorities already having a full plate in their hands, they don’t need distraction from falling objects in the sky, which could prove to be interfering with the tasks they were trying to achieve.

Oh, yeah. By the way, the NYPD had a full plate on their hands already. Two buildings exploded, were brought down, people were trapped inside, eight died, and half the population on Twitter and the streets of Harlem were immediately injected with the fear of a terrorist attack like 9/11 happening all over again. That is absolutely not the perfect time to send a drone flying in the air at all. When you put people into even more of a panic than they’re already in, you cause more panic for the police, and their job gets harder. They don’t need to be worrying about the fear of a potential attacker spying through a drone camera when they have people they need to help get out of harm’s way.

Photography is not, and shouldn’t be a crime. It’s essential for any free state that each person be allowed to practice photography as freely as they practice their speech. But like all other rights and privileges, we have to remember that there’s still a time and place for everything. If you’re going to take a picture in the midst of a disaster, and use a device that got people worried even before it reached the attention of most police officers, you’re not helping make anyone’s situation better. In the situation here, Brian Wilson did talk to police before he set his drone off, and kept it in the air until many people and police officers began getting worried by it. Things could have been worse, and in this case the police acted with as much reason as they possibly could with Brian. But not everyone is going to be as reasonable or as compliant as both Brian and the NYPD were on Wednesday, and we have to keep that in mind.

In other news, the DJI Phantom 2 just launched an insanely ambitious marketing campaign.

Recording Shows, NYC Drone Incident Was Not Risky To The Helicopter