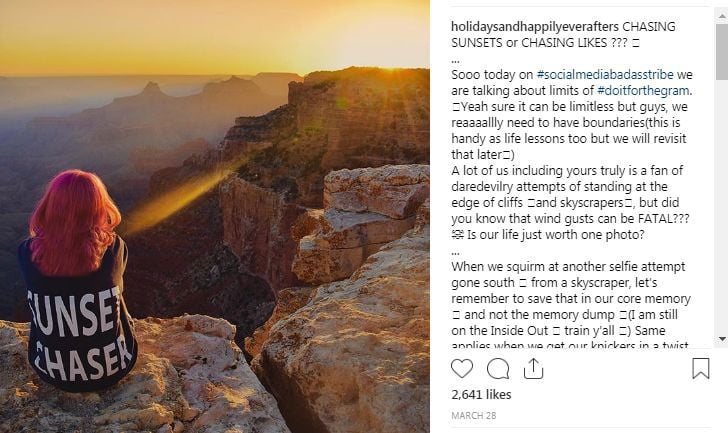 Falling off a high location is one of the most common causes of selfie-related deaths. And last week, a desire for a perfect snapshot took away two more young lives. Vishnu Viswanath and his wife Meenakshi Moorthy wanted to take a selfie at Yosemite National Park when they were trying to photograph themselves and the spectacular view at Taft Point.

29-year-old Viswanath and 30-year-old Meenakshi were Indian expats living in California, AP News writes. Viswanath’s brother confirmed that the couple fell to their death while trying to take a selfie. Reportedly, the visitors spotted the camera the following morning and alerted the park rangers, who found the bodies of the couple.

Viswanath and Meenakshi ran an Instagram page holidaysandhappilyeverafters, which has more than 23K followers. Ironically, in one of the posts, they even warn Instagrammers to be careful and responsible when snapping selfies at dangerous heights.

A couple of weeks ago, photographer Matthew Dippel accidentally took a photo of an engagement at the exact same spot from which the Viswanath and Meenakshi fell to their death. He used Twitter to look for the couple; and he eventually did find them. So to make things clear – the Indian couple is not the one in Dippel’s image.

Only two months before this tragedy, a teenager also lost his life in Yosemite after falling from the height of 820 feet. And again, it was because he wanted to take a selfie, according to the reports. Sadly, we’ve seen many more tragedies in which “adrenaline junkies” and “daredevils” lost their lives because of the chase for the perfect selfie and Instagram likes.

In an attempt to reduce selfie-related accidents and deaths, India has proclaimed “no-selfie” zones at some of the major tourist spots. I don’t know how well it has worked so far, but something definitely needs to be done to prevent people from pushing their luck just so they can get Instagram likes. In my opinion, we should start from educating people about the dangers instead of simply banning them from tourist spots. But I wouldn’t be surprised to see the “no-selfie zones” start emerging in other parts of the world, too.

« Influencer sued for failing to promote Snapchat Spectacles on Instagram
Canon Q3 results are out. Not awesome, but the company is definitely not dead »