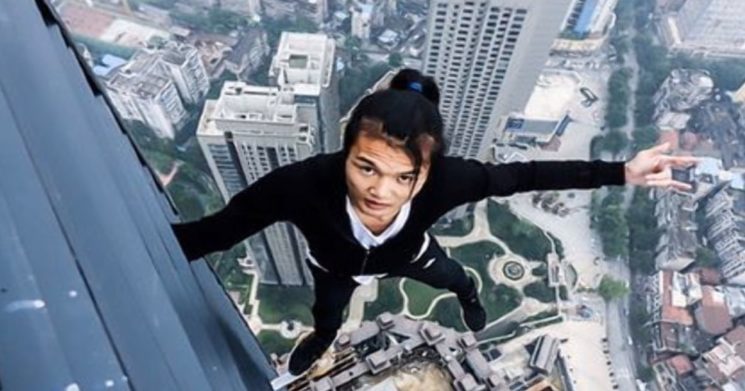 Wu Yongning, a famous Chinese “rooftopper,” was confirmed dead after failing at one of his recognizable stunts. The former movie stuntman attempted to hang off a 62-story building for a sponsored video. He was unable to climb back onto the roof, so has eventually lost his grip and fell down.

26-year-old Wu amassed millions of followers on the Chinese social network Weibo. He was famous for fearlessly climbing the tallest skyscrapers without the safety equipment. According to the Telegraph, Wu’s profile featured over 300 videos of him tip-toeing on scaffolding or doing pull-ups from the side of tall buildings. When the incident occurred, he was dangling off Huayuan Hua Centre in Changsha, China.

According to BBC, Wu was participating in a “rooftopping” challenge allegedly worth 100,000 yuan ($15,000). However, the nature of the competition and the name of the sponsor remain unknown. Reportedly, Wu accepted the challenge because he needed the money for his mother’s medical treatment, as well as his own wedding.

Although the sad news is only public now, the accident happened over a month ago. As the Telegraph reports, his account on Weibo suddenly went silent last month. Then, on December 8, his girlfriend shared a status that reads: “Today is December 8th. It makes me think of November 8th, the day you left us and left this world.” Police have confirmed that Wu died on November 8, after falling from the Huayuan Hua Centre.

Unfortunately, this isn’t the first death of this kind. Only two months ago, urbex photographer Eric Paul Janssen got killed after falling from the 20th floor of the LondonHouse hotel in Chicago.

I understand that Wu accepted this particular challenge because he was in a desperate need of money. But he was doing stunts like this even when only social media fame was involved. Also, he isn’t the only one who attempted it, as the popularity of “rooftopping” is growing. In search of instant, viral fame, more and more (mainly young) people turn to this dangerous trend. And unfortunately, the trend takes its victims, no matter how well prepared they are. So even if it ever crosses your mind to dangle off a skyscraper – please, for God’s sake, wear a harness!

[via the Telegraph, BBC]