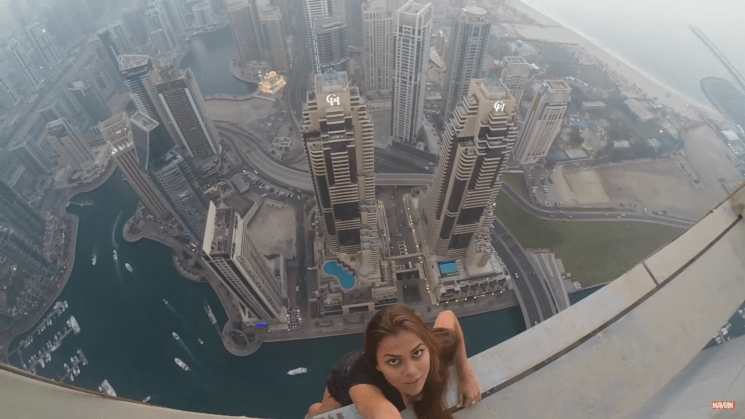 I know that people these days really try hard to get likes on social networks. But I still get surprised how far some of them would go. After the guy who climbs the skyscrapers to take shots, one model went a step further (quite literally). Viktoria Odintsova had a photo shoot on top of Cayan Tower in Dubai: a 306-metre-tall (1,004 ft) skyscraper, the world’s second tallest high-rise building.

But it wasn’t enough just to take photos on the top. The photo session ended with her dangling over the edge of the skyscraper while holding a male model by the arm, without any safety equipment. The crazy has just reached a new level.

First, Victoria took the photos leaning back while the male model held her hand. She published the photo on her Instagram profile for 3 million followers to see.

However, it seems this wasn’t enough. The other photo was taken while she was hanging over the edge of the building, holding only the man’s arm. Not one of them had the safety equipment (and I wonder if at least the photographer had it).

I’m surprised by the number of likes Viktoria got, but the comments speak a different story. The followers were pretty harsh in the comments, calling her “a moron” and stuff like that. But this one’s my favorite: “Risked your life, and it’s not even a good photo.”

Viktoria stated that “all the stunts were performed by professionals” and advised the followers not try it themselves.  The caption on one of the photos reads: “I still can’t believe I did it. Every time I see it, my palms get sweaty.” Mine too, Viktoria. Mine too!

The photos are decent, but there were ways to make them without risking anyone’s life. Have you guys heard of Photoshop?

As I said, I know people do tons of stupid stuff just to get likes. But I wonder where this stops. Is there a limit anyway? People got killed because of photos (especially selfies), but it seems it didn’t serve as a lesson to others. What has to happen to make people stop and think before they go fishing for likes? What do you think?

The story behind the photo – Lunch atop a Skyscraper

« Photographer shares the truth behind viral photo of cheetahs killing impala
These cuboids are made from 50,000 35mm film canisters »