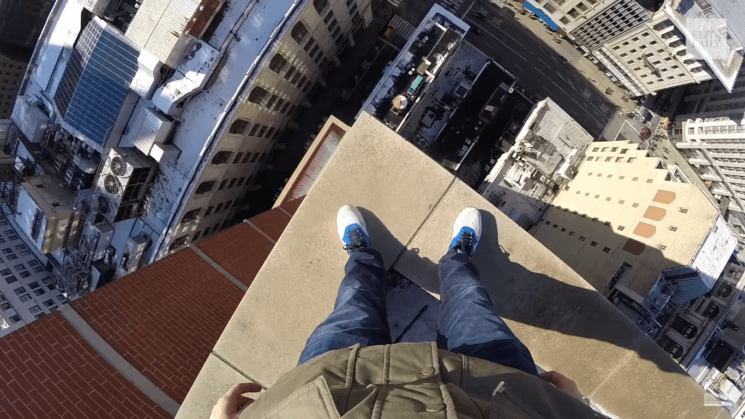 How far would you go to take the perfect shot? Would you climb the tallest buildings around the world to take photos? The 19-year-old German photographer Andrej Ciesielski does exactly this. Other than being unsafe, this is also illegal, so he puts a lot to risk to take the breathtaking cityscapes. But is it worth it?

This young daredevil started climbing skyscrapers when he was fifteen. He says he used to be afraid of heights, and this is why he initially started doing this. He was led by the famous saying that you have to face your fear if you want to beat it – and it seems to have worked out for him. To be honest, I got sick only from looking at this video and, as I am very afraid of heights.

It started as a way of overcoming the fear, and it turned into a dangerous passion. Andrej says he know he shouldn’t do it, but he just can’t stop. And I can get it, when adrenaline kicks you, it kicks you hard.  He’s climbed all kinds of buildings, in different parts of the world: World Finance Center  in Shenzen, Rainbow Bridge in Tokyo, Central Plaza in Hong Kong and Millennium Plaza Hotel in Dubai, to name a few.

The photos, as you can see, are really amazing. They definitely offer a different perspective to the cities where they were taken. However, Andrej may have taken his passion a little too far. In January 2016, he climbed the last-standing wonder of the seven wonders of the Ancient world: the Great Pyramid in Giza. As a result, he was banned from Egypt, as climbing is illegal without the special permit from the authorities.

Andrej also got arrested in Japan or climbing a bridge, and he spent 8 days in jail. He often chooses the places that are illegal to climb. Also, he sometimes even picks locks to get to the top, as you can see in the video.

As someone who enjoys urban exploring, I find Andrej’s photos awe-inspiring, but I don’t really like his methods. Not only it’s illegal, but he is risking his life only to take the shot – and I think it’s simply not worth it. There are better ways to get the view, the legal ways, and above all – safer ones. What do you think?