Have you ever had a dream shot that you wanted to do but could never do it? I think it has been more than a year since I wanted to do a shoot where I could shoot in the middle of the road with cars passing by and had my model lit by my flash.

Recently I was contacted by Innovatronix the maker of Tronix Explorer Battery Packs and they offered to let me use their battery packs and it was the moment I was waiting for to do my Dream Shot. In this article I will do a review on the Tronix Explorer 500Li and a step-by-step explanation on how I got my dream shot. 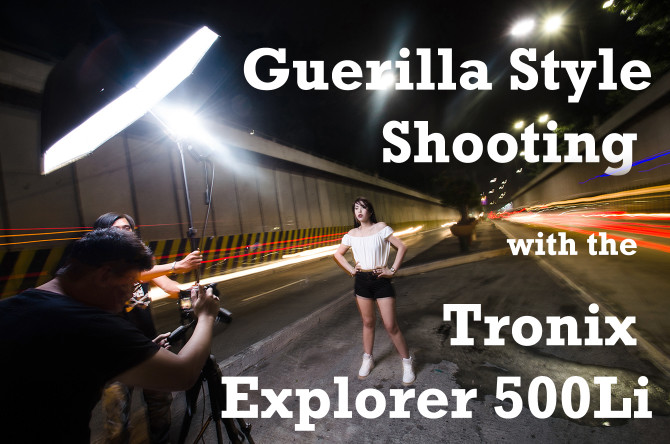 I have never tried to do this shoot, where security may kick me out, because I only had 2 speedlights for outdoor use and the recycling time wouldn’t be enough if I was in a hurry that’s why the Tronix Explorer 500Li was the perfect battery pack for the job.

Before even going in the middle of the street to shoot I needed to prep up and do my research so that the shoot would go as smooth and as quick as possible. 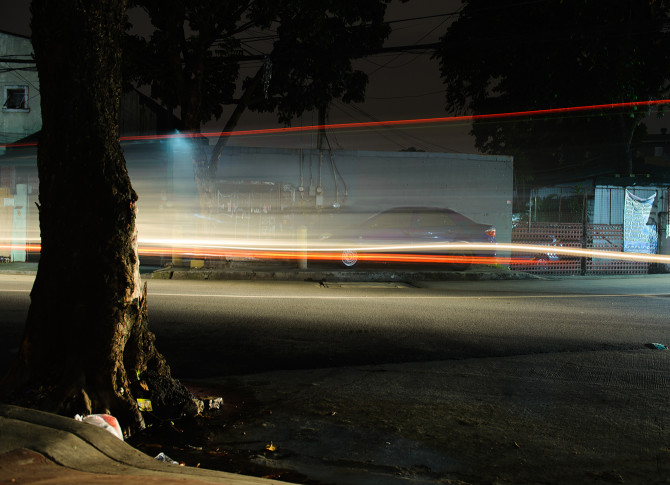 After doing some tests I found out that shooting in bulb mode was the best thing to do because I could control the shutter depending on how fast the cars passed by, and shooting between f5-f8 is the best aperture for the job.

It was my first time to work with this battery pack so I wanted to do a quick shoot even before going on the street. I was excited to see the how well the battery pack performed so we set up in our rooftop to do a sunset shoot while waiting for the sun to go down and the traffic to pass. 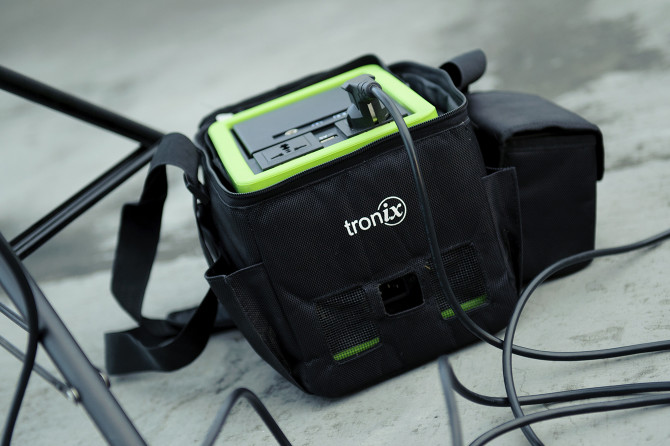 The battery pack comes with its own carrying case and has an easily-replaceable battery feature for quick installation of the spare battery. It is rated at 500watts continuous and powered by LiFeP04 Li-Ion Battery. It can give around 350 flashes at full power using 400ws monolight and recycling time close to that of a wall socket so I wasn’t worried at all about the recycling time of the studio strobe.

I also really dig the green and black look of the battery pack itself. 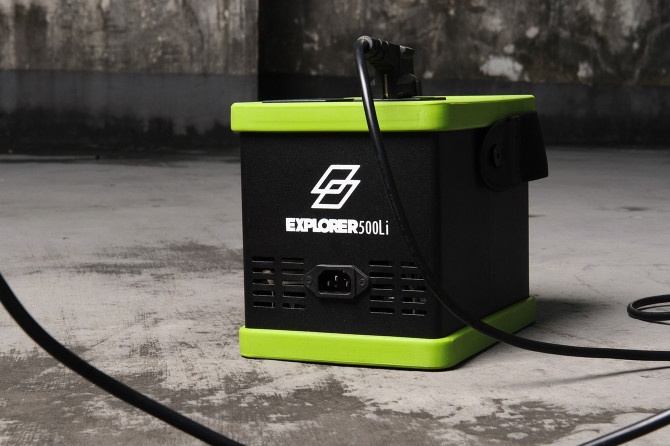 For this shoot we were shooting with a 500w Elinchrome studio strobe thru a reflective umbrella. 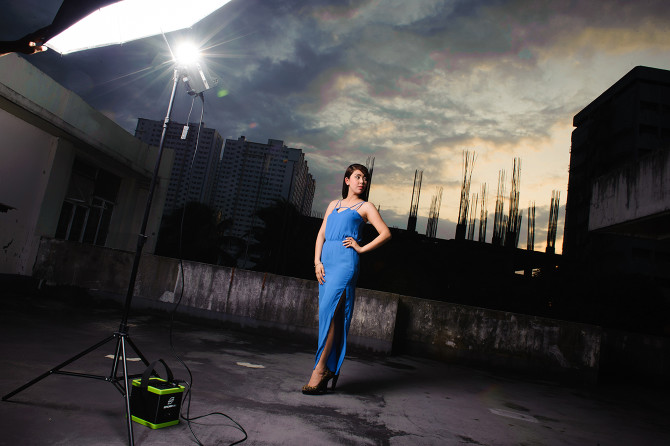 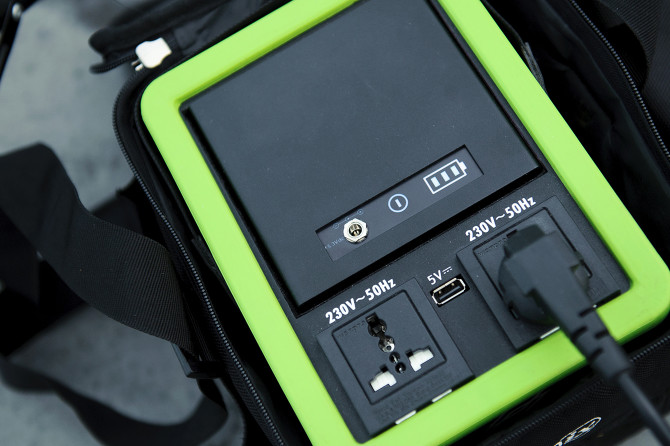 I was using my 2-stops under expose technique for this shoot. 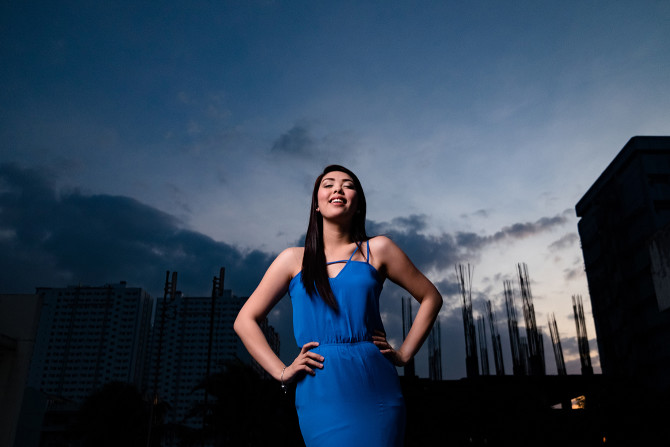 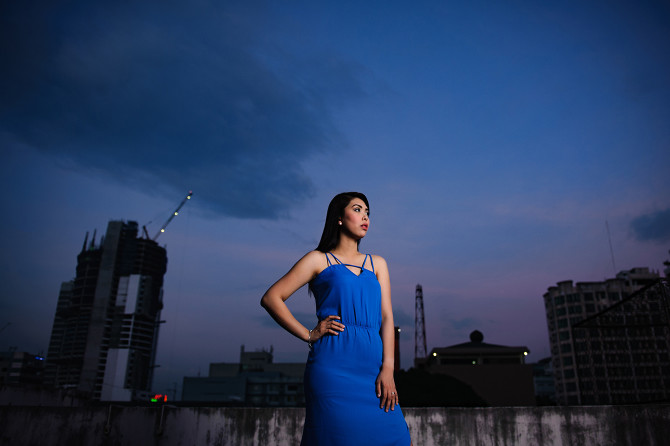 After a while I needed to charge some of my batteries and do a quick edit on my shots good thing the Explorer 500Li can also power your computer and chargers, and it also has a 5V usb socket for your mobile phones. 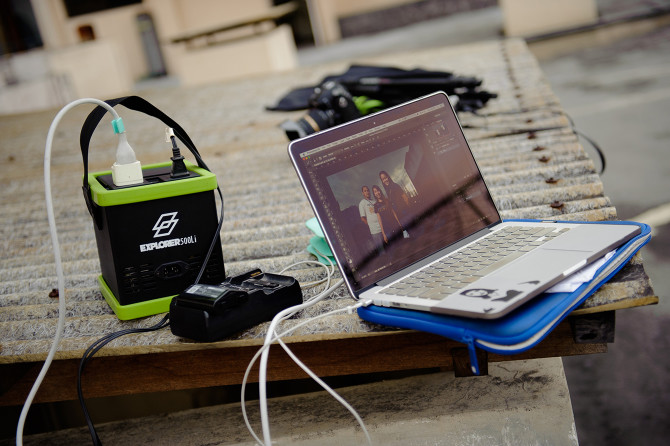 While I was planning to use the Elinchrom for this hoot, I also brought the Tronix Explorer P-Dock which is built for studio strobes and I thought that I can use my 2 YN-560 II flashes as a backup 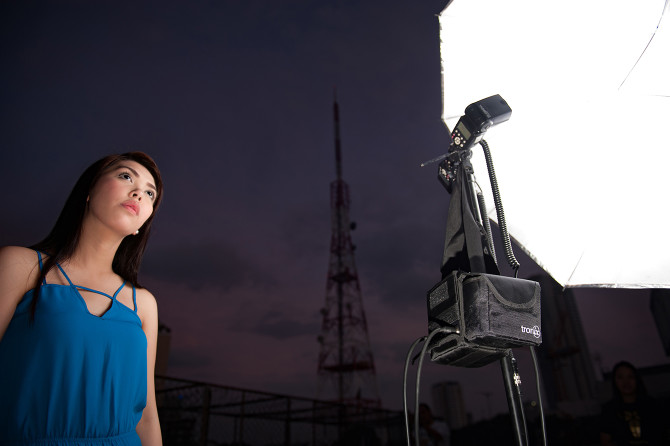 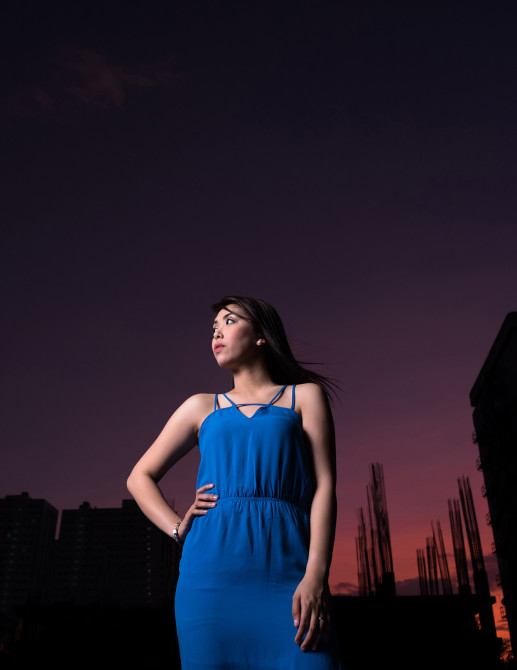 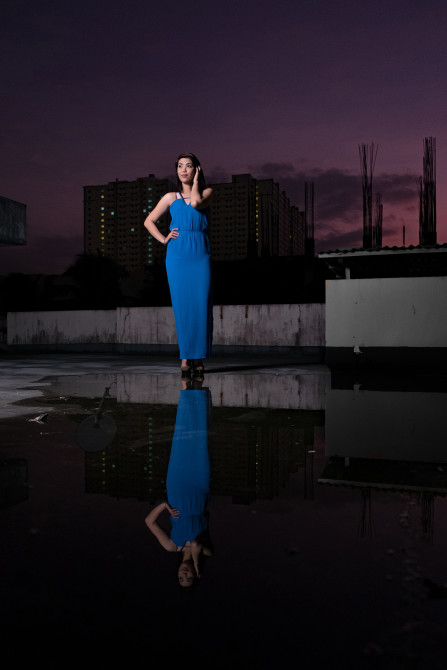 When it was dark, it was time to move onto the street but first we had to pack our stuff. We used the modeling light of the studio strobe plugged into the battery pack so we could see what we were doing. 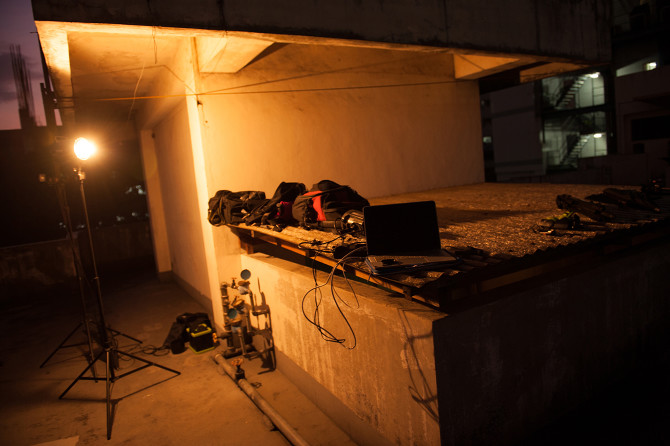 I was already confident that the battery pack and the studio strobe can take the stress of shooting fast, but I wanted to do a little bit of extra testing before going to onto the main highway for the shoot.

We first tried shooting in front of the studio to do some test shots because it had less traffic and cars. 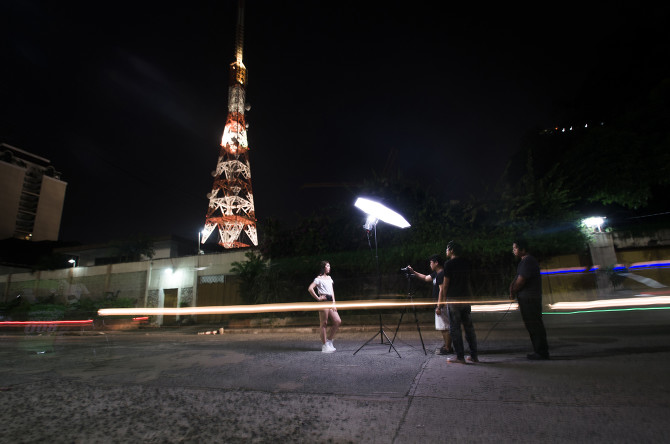 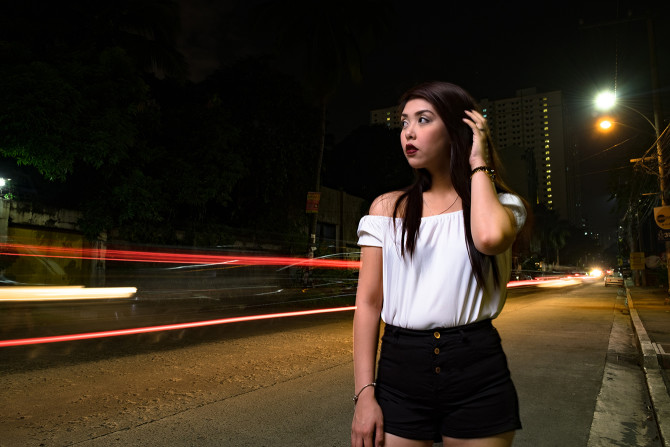 After getting hyped up it was time for the real shoot. We had a van with 8 people including me just to make this dream shot happen. There was a highway near my studio that had a bay (where cars can actually park for short while) in the middle where we could park the van and setup the shot but we needed to do it Quick as it was a main highway. 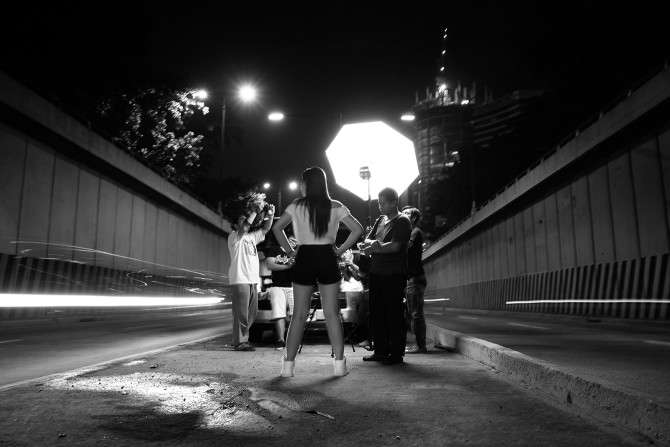 When we arrived in the bay, I was the first one to get out with my Fuji Xe-2 and tripod. I set my exposure to ISO 200, f7.1 Bulb mode and told the other people to get out of the van so we could take the shot.

Two people were handling the light stand with the studio strobe and the battery pack while the others took some BTS shots. Because of all the testing we did  before the shoot it only took around 8min from the time we stopped until I got my shot. 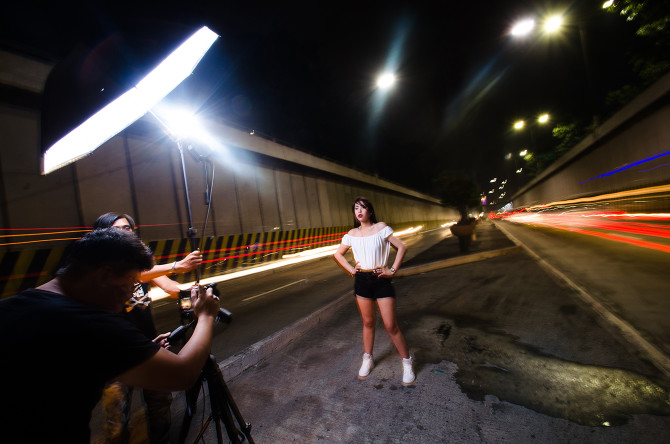 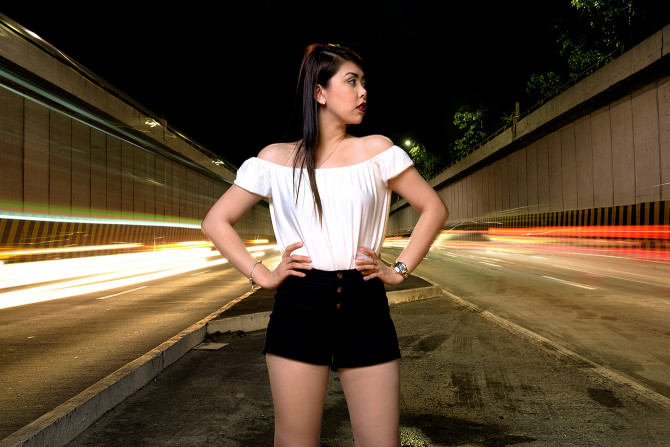 So that is the story how I got my dream shot to happen.

Thanks to my girlfriend Jubcy for modeling, Genesis for helping and The Innovatronix team for making this happen. 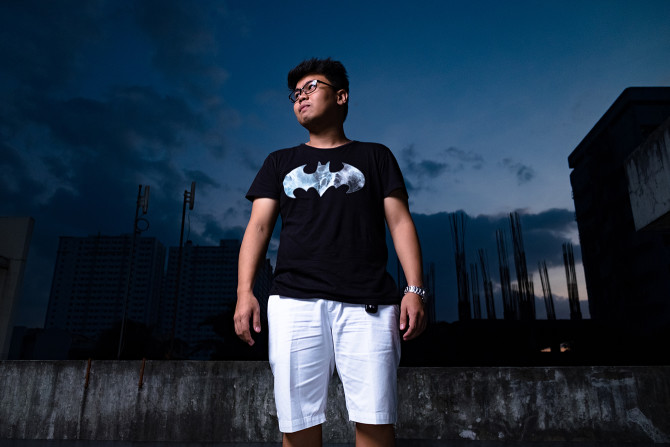 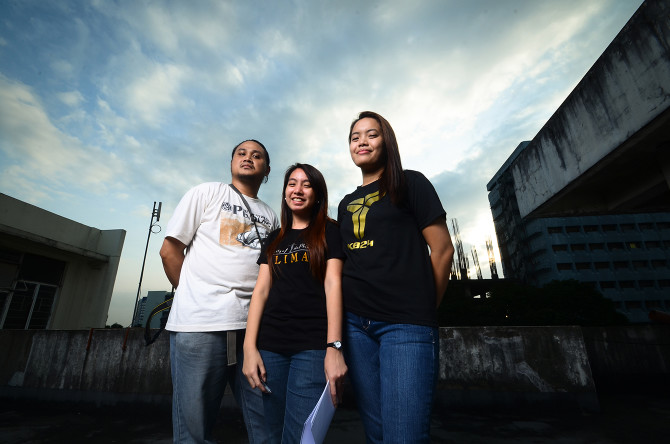