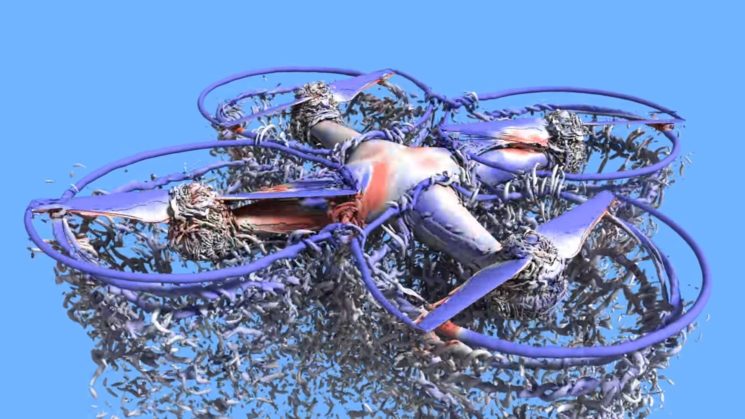 NASA has used computer models to simulate airflow for decades. It lets them test to see how aircraft will react to drag, friction and countless other forces. All important factors when it comes to designing the next generation of vehicles. At NASA’S Ames Research Center in Silicon Valley, the technique was recently used to check out the airflow around quadcopters. Specifically, the DJI Phantom 3.

Unlike NASA’s typical rocket powered aircraft, quadcopters rely on four spinning motors with propellers to generate thrust. This thrust needs to generate enough lift to raise both the quadcopter and its payload (perhaps a gimbal and camera) off the ground. The simulations show just how complex the air motions are from the propellers, due to interactions with the X-shaped frame during flight.

The simulation of the DJI Phantom 3 during flight video above shows airflow interactions as undulating lines. Pressure changes are shown using colours from red (high pressure) to blue (low pressure).

It’s interesting to see just how much of the propeller cycle puts high pressure air over the top of main body of the Phantom. I’m certainly no expert in aerodynamics, but one might assume that this high pressure might actually hinder lift. Obviously this high pressure isn’t enough to completely overpower the downward thrust from the motors & props, though, or it would never get off the ground. It does suggest that there’s room for improvement, though. 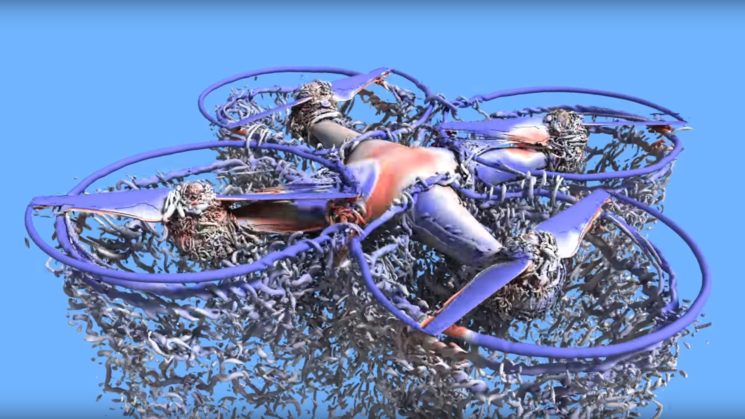 I’d be curious to see how the simulation looks with something the DJI Mavic Pro. It has a much smaller body to get in the way, although the props aren’t that dissimilar in size.

The findings of NASA’s test offer new insights into the design of multirotor vehicles. With interest in heavy-lift multirotors for uses such as cargo transportation on the rise, the simulations are going to provide valuable information. Better airflow efficiency is likely to also help extend battery life, and provide better stability, too. So, hopefully results of this research will trickle down to commonly available quad and hexacopters, for the rest of us.