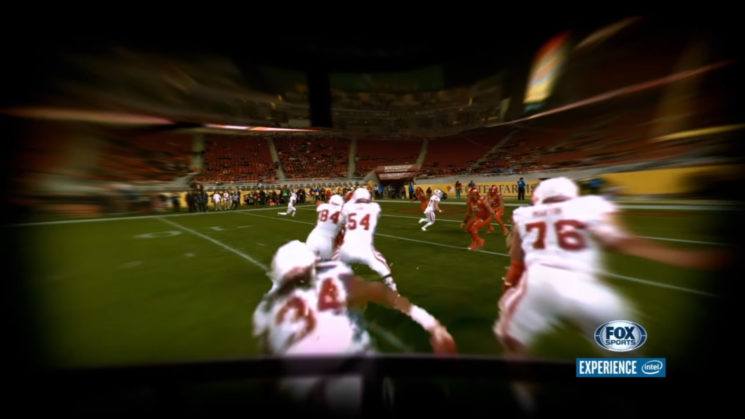 The show stealers at the Super Bowl are often the commercials or “wardrobe malfunctions“. This year, though, there’s a new camera tech that might just edge it for some viewers. Whether you’re interested in photography or video, or simply a fan of watching the games, it’s certainly going to give a new perspective on things. That new perspective is a player’s eye view of the field.

Teaming up with Intel, Fox Sports is introducing what they call “Be the Player”. It allows for a POV perspective from any player on the field without that player actually having a camera attached. FOX have pushed Intel to advance their already amazing 360 Replay technology. It’s a system akin to Photogrammetry, although very advanced, and much faster than the methods most of us use.

Essentially, the system uses the image data from an array of cameras spread around the stadium to generate a 3D model of the venue and everybody in it. Textures are created from the video footage and applied to the 3D model. This then allows a virtual camera to move anywhere in the scene to see it from a different angle. It’s similar to how a camera works in a 3D video game.

The basic technology’s been out for a couple of years now. It was shown off in 2013 as a way to spin around the batsman during baseball game replays. At the time it basically generated in-between frames as the view moved from one camera to another. A little like the interpolation between frames on the Matrix’s “Bullet Time” effect.

The technology now, though, allows for a pretty much free moving camera that can go anywhere. To do this with such a complex scene in a short enough time span for in-game replay is not easy. I’ve done photogrammetry before to test out different lighting scenarios on real world objects. It can take hours for even relatively simple objects. Fortunately, according to Fox Sports SVP Michael Davies, they have “a huge bank of Intel computing power” to speed up the process.

It literally brings the audience down to the viewpoint of the player at the critical decision-making moment. What other choices did he have? Was his sight blocked? It all looks much different from field level, and can assist our announcers in describing what actually happened on the field.

So, keep an eye out for it during Super Bowl 51 on February 5th, in Houston Texas.

What do you think? Will this enhance the viewing experience? Do you think it’ll end in-game arguments at your Super Bowl party this year? Are you looking forward to seeing how this technology develops into other fields such as filmmaking? Let us know in the comments.