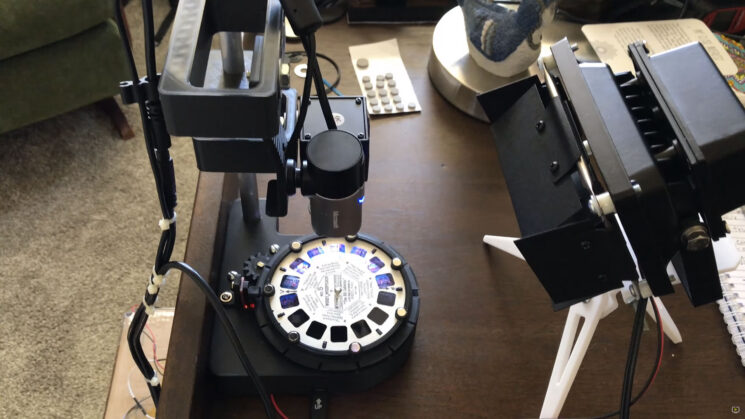 I’ve spoken about the View-Master here on DIYP before. In fact, as recently as the Kandao QooCam EGO review I posted a few weeks ago. It’s something that many of my generation and older look back on with fondness and wonder. While positively primitive by today’s standards, being able to see images in 3D was amazing to us as kids back then and it still fascinates me today.

Well, one person, Jason Altice of the YouTube channel CodeMakesItGo has turned it into an obsession. So much so that he designed and built his own scanner to capture those old View-Master reels digitally so that he could put them online for the whole world to enjoy. He also released all of the plans and code so you can have a go at building your own, too.

While it might seem like a fairly simple project at first, this one is incredibly well developed both in terms of hardware and software. With optical character recognition, automatic rotation and aligning of the scanned images so that they line up perfectly with each other and even colour correction, there’s very little work for the user to do during the scanning process to achieve perfect results.

The images the View-Master uses, much like the Kandao QooCam EGO, are side-by-side images, viewed through a viewfinder that shows one image to your left eye and another image to your right eye. This allows the brain to reconstruct a 3D view of the scene. Jason scans these in and his software arranges them side-by-side and lets him output a video with each stereo pair of images, along with their caption underneath.

You can tell that this has been a work of pure pleasure for Jason as he digitally restores and stores all of these View-Master reels for posterity. He’s been uploading them to a separate YouTube channel, Reel3D. Many have been uploaded in both a parallel view (for use with a 3D viewer, like Google Cardboard or a VR headset) as well as cross-eyed view, so that for those of us with the ability to do so, we can just stare at our screens funny to see the 3D effect.

This little piece of 3D history is well worth checking out, so head on over to the Reel3D channel to see them all. And if you’ve got some View-Master reels and want to make a scanner of your own, head on over to GitHub to download the 3D models and apps and Hackaday for a parts list and a little more information on the construction process.

Watch: Adorable meerkats climb on a photographer to get a better view