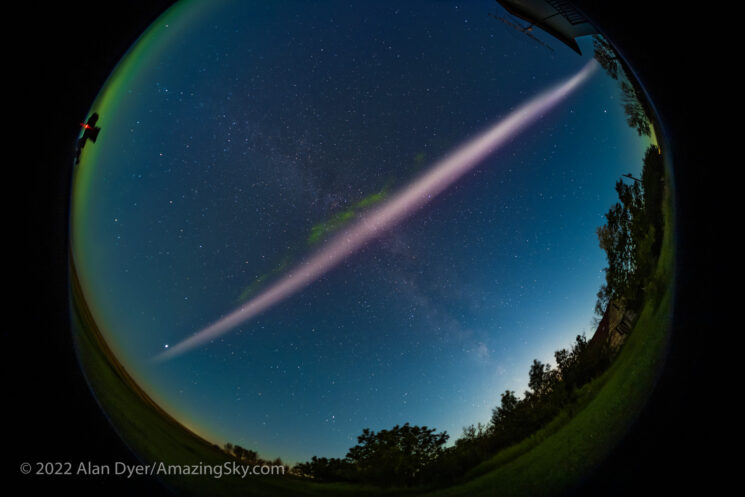 Early Monday morning a powerful solar storm hit planet Earth. The stream of charged solar particles from the sun caused an arresting display of aurora when they hit the Earth’s atmosphere. One lucky astrophotographer captured the spectacular sky and also managed to witness a very rare elusive phenomenon called STEVE.

Alan Dyer, an astronomy writer and photographer based in southern Alberta, Canada, knew exactly what he was seeing. The iridescent purple river of light crossing the sky wasn’t just part of the usual aurora, but was created by an entirely different mechanism and wasn’t even discovered until 2017. 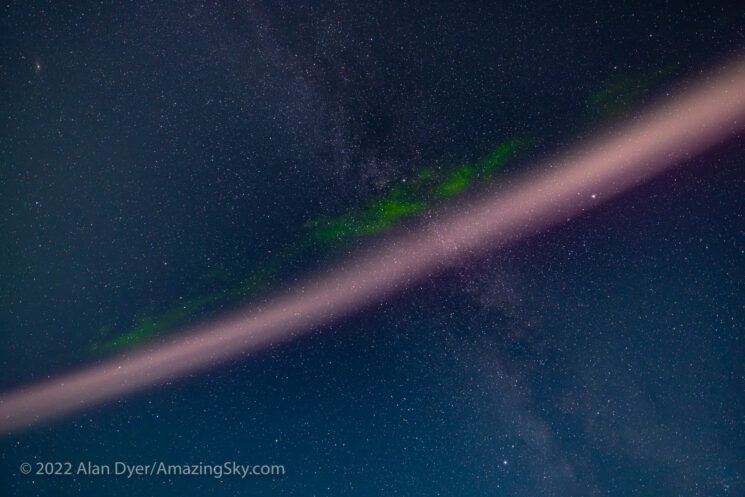 STEVE is of course an acronym, which stands for Strong Thermal Velocity Enhancement. It is typically revealed as a long purplish ribbon of light that hangs in the sky for around an hour. Dyer notes on his Twitter post that this one lasted around 40 minutes. It’s often accompanied by a “picket fence” of green light which usually disappears after a few minutes.

STEVE is a long, thin line of hot gas that slices through the sky for hundreds of miles. The hot air inside STEVE can blaze at more than 5,500 degrees Fahrenheit (3,000 degrees Celsius) and move roughly 500 times faster than the air on each side of it, satellite observations have shown.

A great showing of @STEVEPhenomena last night, Aug 7-8, arcing across the sky, and showing his green fingers briefly for about 2 minutes. STEVE lasted about 40 minutes, appearing as the Kp5 aurora to the north subsided. This was 12:30 am MDT from southern Alberta. @TweetAurora pic.twitter.com/EtKF6udfFk

The aurora happens when charged solar particles hit the upper atmosphere, whereas STEVE hits the lower subauroral regions. Scientists still aren’t completely sure what causes this, however, STEVE almost always shows up towards the end of an aurora display, late to the party so to speak.

This is an amazing capture from Dyer and absolutely fascinating that it has only been seen a handful of times. You can see more of Dyer’s work on his website or follow him on Instagram.