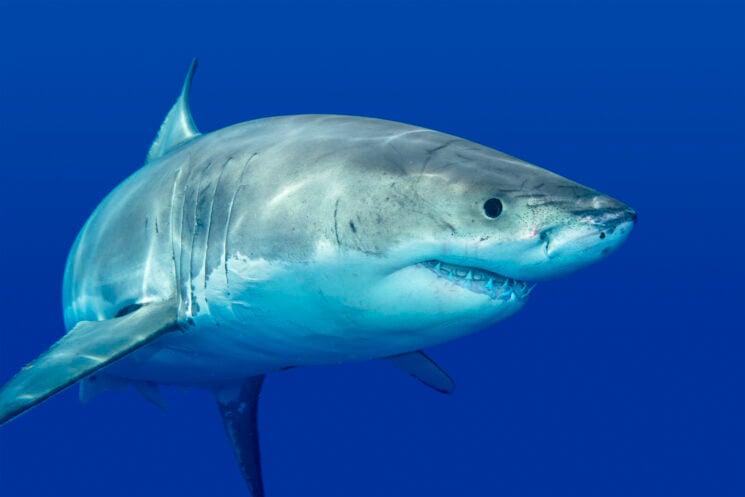 Great White sharks have earned quite a reputation for their aggression, largely due to the film Jaws. However, they are fascinating creatures and we still know relatively little about them.

Conservationist, filmmaker and photographer Jalil Najafov managed to capture a glimpse into the private lives of great white sharks when he spotted a 15-foot long female shark with an enormous circular bite mark on her back. Not only was this incredibly rare, but also raised the question of what caused the scar? Was it Megalodon? Or was it just another amorous great white falling in love at first bite?

The footage was shot in August 2019 when Najafov was on a shark diving expedition off the coast of Mexico. The group spotted the shark swimming near to their boat and quickly became excited when they noticed the huge circular bite scar on the back.

“I was really surprised since I never saw something like this in my life,” Najafov told CNN Travel today. “The bite mark was so huge on a huge shark.”

The filmmaker dove into the water inside a shark-proof cage with his GoPro7 camera, to capture some footage of the shark sporting the bite mark. Unfortunately, the memory card was mislaid for two years, only resurfacing in December 2021 when Najafov rediscovered it and posted some of the shots to his Instagram account.

“I have been working with sharks and shark content for many years, I have a lot of experience in this niche,” Najafov said, “I know for sure when I see something rare, I have never seen such a huge shark scar.”

But what could have possibly caused such a huge bite mark? Conjecture on social media suggested an Orca bite, others wondered if it was from mating. However, Dr Tristan Guttridge quickly ruled out the mating theory, saying “I’d rule out mating probably due to position as the wound looks like it’s healed a fair bit and although mating scars can be nasty they are more superficial than that.”

Female Great whites do often get bitten and injured during mating however this appears to be more from an aggressive or perhaps territorial conflict. Head of the Marine Conservation Science Institute, Michael Domeier, said he was “confident this is competitive aggression” saying that the scar would have since healed, becoming unrecognisable from the rest of the skin eventually.

Najafov’s ultimate goal is to highlight the importance and beauty of sharks. They are integral to the oceanic ecosystem and not the monsters we love to hate.

“There is no ocean without sharks and no oxygen without the ocean. So by saving sharks, we save the planet,” says Najafov.

You can see more of Jalil’s incredible underwater images and videos on his Instagram.

« This camera shaped multi-tool could be just the thing, it even has a bottle opener
Crystals growing in 8K looks like a vast and beautiful expanding antarctic wasteland »