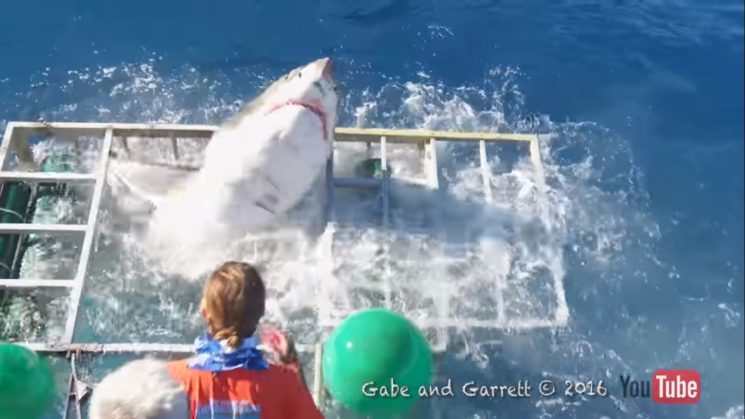 We’ve seen quite a few terrifying encounters of photographers and wild animals. In this video from Gabe and Garrett, an underwater photographer came face to face with a Great White shark when it breached the cage he was in. The incident was caught in a video, and it will give you chills for sure!

Gabe and Garrett is a channel which generally posts adventures of two young boys. However, this video was posted by their dad after his trip to Guadalupe Island, Mexico. The incident happened on 4 October 2016, but the video seems to be getting a lot of traction again.

During a cage diving trip, wranglers pulled large chunks of tuna to lure the sharks closer to the cage. This is a usual practice, and it’s worth noting that tours like this are generally considered safe. However, this time there was a series of events that led to a pretty terrifying incident.

Gabe and Garrett’s dad explains that the shark wasn’t trying to attack the cage, and it wasn’t aggressive. “When a great white shark lunges and bites something, it is temporarily blinded,” he writes. And this shark was trying to bite a chunk of tuna on the bait. As this shark lunged at the bait, it accidentally hit the side of the cage. It’s assumed that it got confused, and since sharks can’t swim backward, it continued to swim forward and broke the metal rail of the cage. The shark ended up inside the cage, but the boat crew remained calm and opened its top so the fish can swim out of it.

At first, it appears that no one is inside the cage. However, there was a diver inside. Fortunately, as the shark was swimming out through the top, he ran away through the bottom of the cage. “The diver is a very experienced dive instructor, remained calm, and when the shark thrashed back outside the cage, the diver calmly swam back up and climbed out completely uninjured,” the man explains.

The diver was uninjured and I’m honestly impressed by everyone’s reaction. However, I noticed that the shark was bleeding. Gabe and Garrett’s dad notes that the animal “had very minor injury and is confirmed okay.” He added that the cage design and bait techniques were being reviewed after the incident. And for all of you who wondered if there’s a video from the diver’s perspective, I’m gonna have to disappoint you. There isn’t one. But there’s another video of the incident along with the full story and the analysis.

This video has made me stare at it without blinking and it made me short of breath. It’s one of my dreams to go shark diving, and this certainly was downright horrifying to watch. But, I’m definitely glad that everything ended well.

« Nikon Z 6 is the best camera of the year 2019, according to EISA
These owls REALLY hate being in front of the camera »