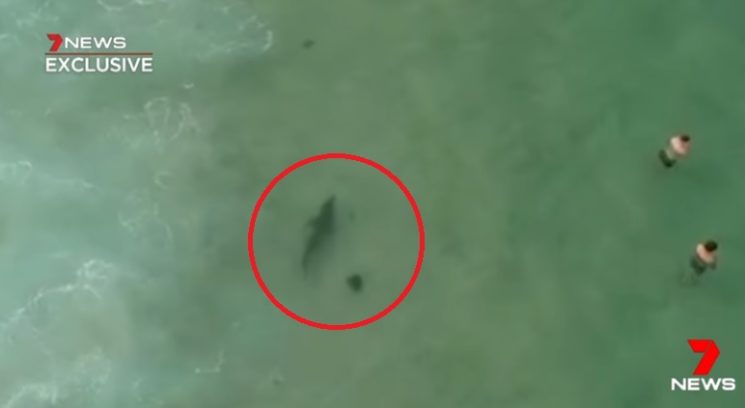 When a 17-year-old Cameron Grace recently flew his drone on Australian beach, I doubt he had in mind that his hobby would prevent a dangerous encounter. While flying his DJI Spark, he spotted a shark lurking only meters away from two swimmers. Thanks to his and his aunt’s quick reaction, the swimmers managed to get out of the water.

Incredible vision shows what experts believe is a great white shark lurking within metres of swimmers on a New South Wales beach.It was spotted by a teenager using a drone. His fast-moving family raced to the shore and yelled at surfers to quickly get out.www.7NEWS.com.au #Sharks #7NEWS

According to 7NEWS Sydney, Cameron spotted what experts believe is a great white shark on a New South Wales beach. It was swimming only a few meters away from two guys who didn’t seem to be aware of it, and it was about 2.5m (8 feet) long.

Cameron’s aunt Rachel Walter says that she knew she had to do something. She quickly ran into the water to warn the swimmers about the shark. They managed to get out to safety and no one was hurt.

This is another case I know of that a shark was noticed by a drone pilot. Last year in Florida, Dan Watson was flying his drone when he noticed a shark approaching his family. But occasional drone enthusiast are not the only ones we can rely on when it comes to spotting sharks. Drone DJ writes that Australian lifeguards use drones regularly to monitor and track sharks swimming in and around popular beaches. “The drone known as the Little Ripper uses AI to detect sharks, alerting lifeguards, emergency services, and swimmers,” Drone DJ writes. And this drone, particularly made for spotting sharks, has a 90% accuracy rate.

But should we really be that concerned about shark attacks and should we be so scared of them? Rob Townsend of Sealife Sydney claims that close encounters are rarer that we think. And even when they happen, experts say that sharks rather avoid people than attack them. He adds that even in the video you can see that the shark is uninterested. According to him, sharks will spot us more often than we think, but will usually remain uninterested in us “because they’re not mindless killers.”

Still, if you ask me, I’d rather have someone with a drone around to tell me if a shark is nearby so I can get out to safety. Maybe I’ve seen too many movies, but I think it’s better safe than sorry.