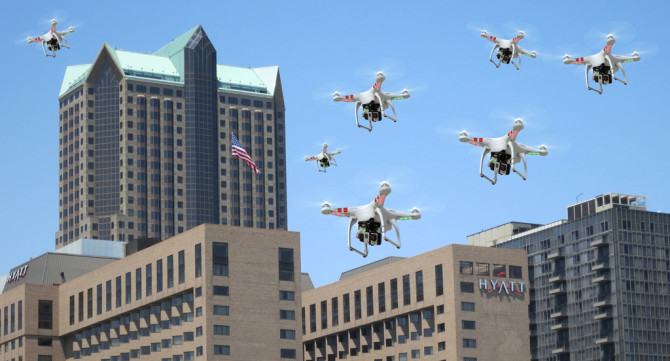 Every now and then we see the occasional authority prohibiting drone usage. It was done in the Gas Explosion scene in NYC and now Yosemite National Park prohibits them all together. The following story may explain why.

Yesterday, a DJI Phantom 2 drone crashed into the Metropolitan Square Building in St. Louis. The Met Square is the tallest skyscraper in St Luise standing 180.7 meters (593 ft) tall. The Drone crashed the balcony of the 30th floor about two thirds of the height of the 42 floors building.

Both the FAA (Federal Aviation Administration) and St. Louis local police are trying to find who operated the drone as it was not claimed. Seems like the operator chose to leave the $650 drone rather than face the authorities. I can understand, quick (and probably inaccurate) math  shows that the 30th floor is at roughly 423 feet, slightly above the 400 feet which the FAA allows recreational drones to fly at. This is taken from the FAA FAQ:

Do I need to get approval from the FAA to fly a model aircraft for recreation?

Jason who sent us the story sums it up quite nicely: “I can’t imagine someone abandoning their drone just because they lost control and it landed on a balcony, but such is life.”

The battle for unregulated drone usage continues with this case providing a strobe point in favor of those supporting regulation. Where do you stand on this?

[via cbslocal | photo of met one (cc) by Paul Sableman]

Some Genius Tried Flying His DJI Phantom At The White House; Crashes It Into Obama’s Lawn