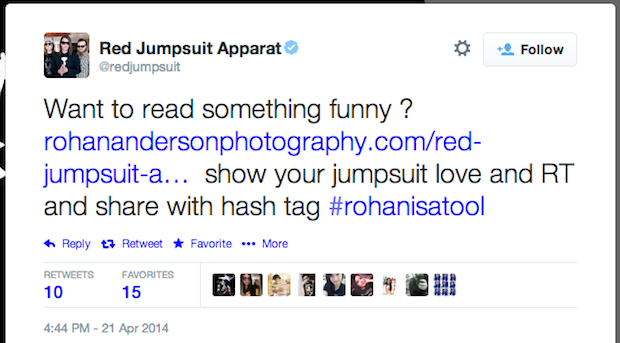 It’s a sad reality for small business photographers that there will be times where their work is stolen by others. Most of the time they’ll barely be able to fight it, either, and they’ll drop charges just because they can’t go on with them.

But its not everyday that you hear about that work being stolen by other artists.

That’s what happened to Rohan Anderson, a photographer from Australia whose work was just recently posted on the Facebook page of a band called The Red Jumpsuit Apparatus. Featuring one of the band’s guitarists, the photo was cropped, filtered, and put up on the page with nothing other than the caption “SHREDDER.” 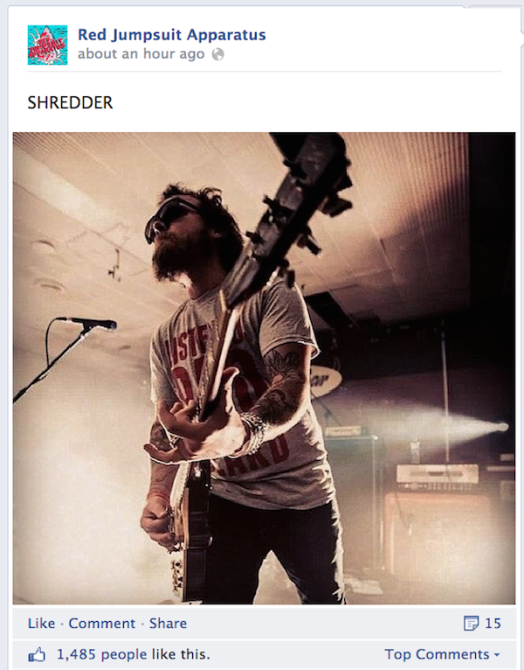 After it came to his attention, Rohan did the most reasonable thing given the situation and emailed the manager showing ownership and asking to remove the picture. A while later, him and a few friends commented on the picture itself, and every single one of them disappeared within moments. After that, the photo’s caption was edited to say “SHREDDER! Photo credit : Rohan Anderson”.

With no response to the email Rohan sent them, the band completely ignored his requests and tried some damage control by crediting him with the photo. In an attempt to ask them again, Rohan contacted the band through Facebook, to be responded with “lol go for it”.

Then his email was responded to with this:

“You have no legal claim as the photo is credited and is not posted for a monetary gain and features our likeness and image not yours. Also you have just got your self banned from any festival or show we ever play again in that region for life! Congrats!
Sent from my iPhone”

I’m not going to post the rest of the exchanges, but you can check them out on his blog post detailing what happened; but I’ll warn you that the responses Rohan received are downright unprofessional and childish.

After all the exchanges, along with the band posting tweets trying to make “#rohanisatool” a trending hash, the band(‘s public representative) issued an apology, stating that they dealt with the situation. The photo’s also being paid for, and the band sent out a tweet asking fans not to antagonize Rohan; they made sure they deleted their “#rohanisatool” tweet beforehand. In other words: horrible, horrible damage control.

So I’ve given you guys the info. Take from it what you will, but now I want to leave an open letter for The Red Jumpsuit Apparatus themselves:

Along with being a photographer, I’ve been a music producer for about eight years now. I’d love for the opportunity to have that music heard, to be able to tour, and to be able to know that people connected to the music I write. But right now, I just do it on my own time. I struggle with it just as any other artist struggles with their work. I know you guys have had to do that. And I know you guys had to work to get to where you’ve gotten.

That’s probably the reason this story really got to me. It’s a disgrace to see disrespect like that towards an artist from a band as established as you guys got to be. It’s sickening to see that instead of supporting artists you benefit from and honoring their requests, you instead tell them that they’re lucky to even be featured on your fan page.

And maybe that’s why you guys are what you are today: irrelevant. When you write a song condemning domestic abuse towards women, you’re respected. But when you turn around and abuse whatever power you’ve gained like how you did now, you ruin any integrity you’ve had as an artist in the first place.

This is the beginning of some bad publicity, but maybe that’s a good thing for The Red Jumpsuit Apparatus. Take this as your last fifteen minutes of fame, because you’ve shown that you guys aren’t artists anymore; you guys are hypocrites. And it’s great to see hypocrites get what they deserve.