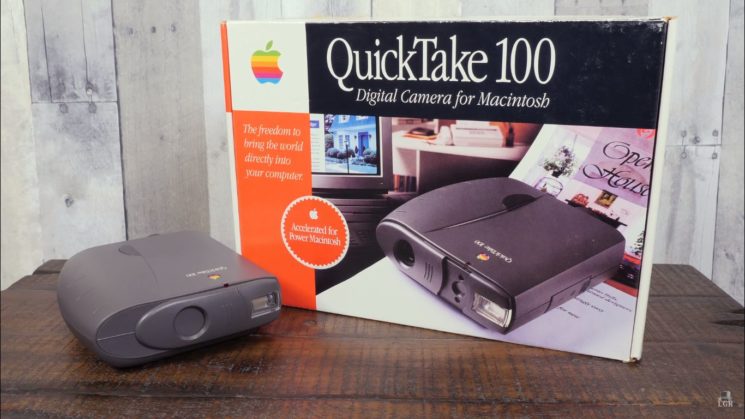 Long before we started discussing whether iPhone can replace compact or DSLR/mirrorless cameras, Apple released QuickTake 100. It was launched in 1994 and was one of the first successful consumer digital cameras. Lazy Game Reviews travels back in time and brings you an unpacking video and a review of this retro treasure. So, what was the experience of taking photos with an Apple product back in 1994?

Apple QuickTake 100 shot 0.31 MP 640×480 photos in 24-bit color and retailed at $749. It doesn’t sound so impressive now, but at the time, it was both technically advanced and affordable. For comparison, the nearest price competitor Logitech Fotoman Plus shot in black and white only. The Dycam model 4, which shot in color, cost almost twice as much as QuickTake 100.Who would have thought Apple once had a technically impressive gadget which is also lower in price than the competition?

Anyway, when the QuickTake 100 was first launched, it only came with software that enabled you to use it with Mac. But, the later models were released for Windows as well.

The camera itself looks kinda like a pair of binoculars. It features a front slider that you move to reveal an 8mm fixed focus lens, the equivalent of a 50mm lens on a 35mm camera. The aperture ranges from f/2.8to f/16 and the focus ranges from four feet to infinity. The shutter speed goes from 1/30 and 1/175 s and ISO is approximately 85.

The camera is equipped with a viewfinder and an LCD panel. You can control four features with the tiny buttons around the LCD. Three buttons are used to control flash, resolution, and timer. The fourth, recessed button is used to delete all images at once. Yup, all of them.

Since Apple QuickTake 100 doesn’t have an LCD where you can preview the images, you need a computer to view them. In the video, the camera is paired with a lovely retro Power Macintosh 7300/200. When you connect the camera to the computer via serial cable, pop in the floppy disk with the software, and you’re all set. The QuickTake 1.0 software doesn’t give you any editing options; it’s mainly for getting the images off of the camera. You can also control the features as if you did it directly on the camera. Additionally, the software lets you take a photo which you’ll immediately see on your desktop.

Clint of Lazy Game Reviews was so kind to share the photos he took with Apple QuickTake 100, and you can see them here. If you’re feeling nostalgic and want this camera for yourself, it sells on eBay for about $200.

I must admit I’m not too much of a gear geek. But I love reviews of these retro cameras! Most of them were made when I was still a child, so videos like this teach me something about the history and development of digital photography. Even since I used my my dad’s first digital camera (in 2004, I think), the technology has advanced so much.

As for you who were already doing photography in the ‘90s, I guess this is a fun way to remember the beginnings. Perhaps it also makes you feel grateful that digital cameras don’t use floppy discs any longer. : )

My experience shooting in extreme cold. (well below zero Fahrenheit)

« Flying a drone above the new apple headquarters will most likely be its last flight
Samsung just announced the world’s largest 2.5″ SSD with 30TB of space »