There are some things which you think would be obvious. Like walking out into a busy road full of cars, putting your hand in an alligator’s open mouth, or flying your brand new drone over Apple’s shiny new campus – officially dubbed “Apple Park”. But for some people, apparently, it’s not so obvious. When Assaf Kaufman bought his son a new drone for his bar-mitzvah, they decided to take it out for a spot of flying. So, why not take it for a spin in Apple’s direction? What could go wrong? 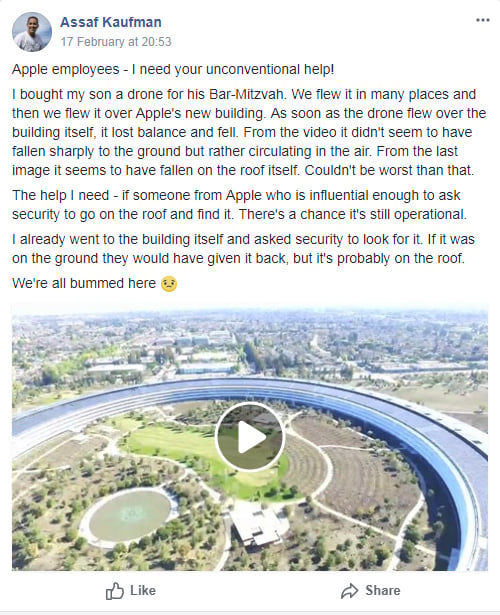 Kaufman’s account of events was posted into the Facebook group “Israelis in San Francisco Bay“, and watching the video, you can clearly see the drone losing control right as it enters the space directly above the building. He does appear to briefly gain control of the drone again before it spins out of control again and the screen goes black. Kaufman also seems to have sought the help of other drone owners in the area to help him discover where his drone might have landed, and Matthew Roberts was happy to oblige.

After Roberts’ assistance in locating the drone, which appears to have landed on the solar roof of the building, Kaufman took to Facebook seeking help.

I bought my son a drone for his Bar-Mitzvah. We flew it in many places and then we flew it over Apple’s new building. As soon as the drone flew over the building itself, it lost balance and fell. From the video it didn’t seem to have fallen sharply to the ground but rather circulating in the air. From the last image it seems to have fallen on the roof itself. Couldn’t be worst than that.

The help I need – if someone from Apple who is influential enough to ask security to go on the roof and find it. There’s a chance it’s still operational.

I already went to the building itself and asked security to look for it. If it was on the ground they would have given it back, but it’s probably on the roof.

Apple has already declared that the space above their campus is a no-fly zone, although there is some debate about that. There’s no official FAA listing that shows the space as a no-fly area, and there don’t even seem to be any “Controlled Airspace” filings. Or at least, not as far back as last July. That might have changed now. But there are other FAA regulations that would come into force, regardless of Apple’s thoughts.

The height of the four-story circular building is somewhere around 50ft. FAA regulations state that drones must maintain a distance of 360ft from structures. So, flying directly overhead, you’d have to be flying at least 410ft above ground level in order to not break that regulation. However, at that point, you’re breaking another regulation. The one about not flying more than 400ft above the ground. So, either way, when you fly over the new Apple Park, you’re breaking the law. 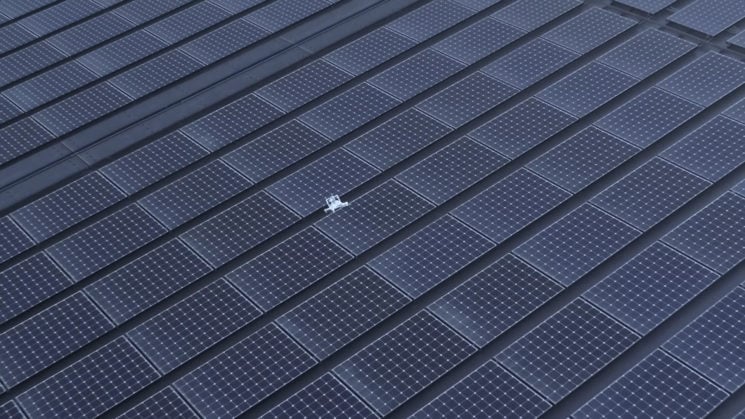 It appears that Kaufman is now seeking help from Apple employees at the Park, hoping that somebody will hook him up with a security guy at the site to help him retrieve his son’s drone. I don’t fancy his chances, though.

I have a feeling, that if anybody gets in touch with him, it’ll be the FAA.

« This crypto-art rose is the most valuable virtual art, sold for $1 million
Travel back to 1994 with this video Apple QuickTake 100 shooting experience »