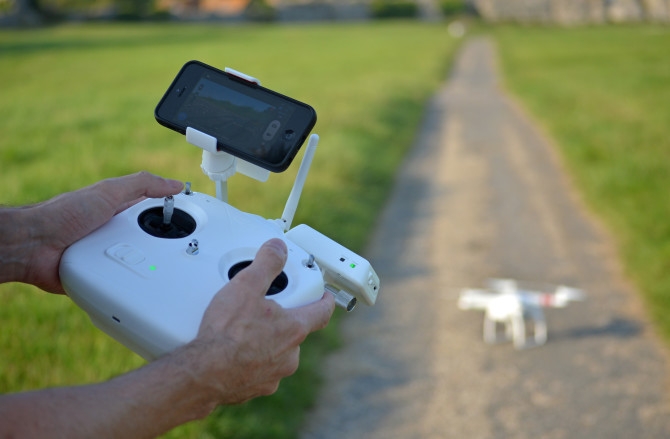 A veteran photojournalist who works for several different news agencies in British Columbia, including the BBC, was arrested for “disturbing the peace” while taking aerial photographs of a burning building. The photographer, Eddie Mitchell, maintains that he was operating the drone legally. Mitchell says not only does he currently hold a Civil Aviation Authority license for drone operation, but he also had permission from the land owner where he was filming.

Before he took the drone out for a spin, Mitchell notified the police in advance of his plans to fly the aircraft. Mitchell says the officer he spoke to told Mitchell to wait 10 minutes while the officer spoke to his sergeant. Mitchell says after the officer failed to return, the photographer took the drone out and began working. Lo and behold, the officer returned asking Mitchell to bring the drone down. In a video clip of the incident posted on ITV, you can see the officer swiftly approaching Mitchell telling him, “This is your final request, please bring your drone down.” Mitchell responds to officer’s request saying he would indeed bring the drown down, but couldn’t maintain the full control needed to be able to land the drone while the officer was coming towards him. Before Mitchell finishes the first sentence of his response, the officer begins taking the controls from Mitchell’s hands, reads him his rights, handcuffs him, and places him under arrest.

“A number of uniformed officers and detectives were sent to the scene of this tragic incident to assist Surrey Fire and Rescue Service with their investigation. While in attendance, concerns about the behaviour of a man were raised to officers from people who believed he was acting in a disrespectful and intrusive manner…” Said Detective Chief Inspector Antony Archibald in a statement to ITV.

Meanwhile, the drone is still in the air…Did I mention this was all happening in a location that fell within the flight zone of nearby Gatwick Airport’s air traffic control zone? Fortunately, the officer somehow managed to bring the drone down, but also managed to break the equipment in the process.

After five hours in a police cell and intervention from a BBC lawyer, Mitchell was released without charges. He received his equipment back the next day, but says the damages to the drone, plus loss of wages set him back £5,000, which he plans to recover through a lawsuit that will be filed claiming false imprisonment and damages incurred to the drone by the arresting officers.

Mitchell told The Press Gazette, “I don’t rush things and have a good relationship with officers across the board in Sussex. That’s been a hard-earned relationship. Here I’ve been penalised for being honest and forthcoming with police and telling them what I was going to do. I think the way that police deal with photographers needs to be looked at…”

And, in case you were wondering, there is official guidance from the Association of Chief Police Officers (APCO) for all forces which states: “There are no powers prohibiting the taking of photographs, film or digital images in a public place. Therefore members of the public and press should not be prevented from doing so. We need to cooperate with the media and amateur photographers. They play a vital role as their images help us identify criminals.” You can read the entire document, here.

While there are a few really interesting things happening in this story, what I find to be the most curious is the situation in general and how much potential it has for really pushing lawmakers to establish and/or clarify the policy and procedures surrounding the usage of drones. To recap: a man who underwent several months of mandated training and licensing to learn to fly a drone safely was arrested while operating a drone mid-flight (very close to an airport, over a burning building where there were many firemen, officers, and residents on the ground), the controls of the drone are then taken over by an officer who has no reported history of ever flying a drone or having gone through training to do so. Is it just me or does the potential for further disaster here seem entirely plausible?

That’s where it get’s interesting for me. Regardless of whether Mr. Mitchell was in the right or wrong, there are bound to be more instances like this in the future and, without question, there will be cases in which the photographer is very obviously breaking a law, operating a drone in unsafe territory, or a similar situation in which the police will actually need to take over the controls. Luckily, the squabble between the law and Mitchell didn’t cause any physical damage outside of the drone, but my question is who would have been at fault if the drone had crashed into something or someone after the officers had taken the controls away from the photographer? Then what? Who, then, is actually responsible for landing the drone safely?

This is precisely why, along with a lawsuit, Mitchell is also pressing ACPO to construct and issue new regulations regarding such situations. Mitchell notes that there needs to be legislation which would prevent an officer from arresting a drone operator while the drone was still in flight. Obviously, there’s a lot of gray area that needs to be brought to light, but, hopefully, Mitchell’s case will be cause for a more expedited process. To that end, it may also be worth noting that, in the aforementioned letter from APCO, it also states: “Unnecessarily restricting photography, whether for the casual tourist or professional is unacceptable and it undermines public confidence in the police service.” That statement at least suggests the police force is concerned about its relationship with the public and the way they are viewed by residents. Perhaps, they will be able to see the potential danger and resulting embarrassment for the police force, had the officer’s not been able to land the drone safely. One can hope, right?