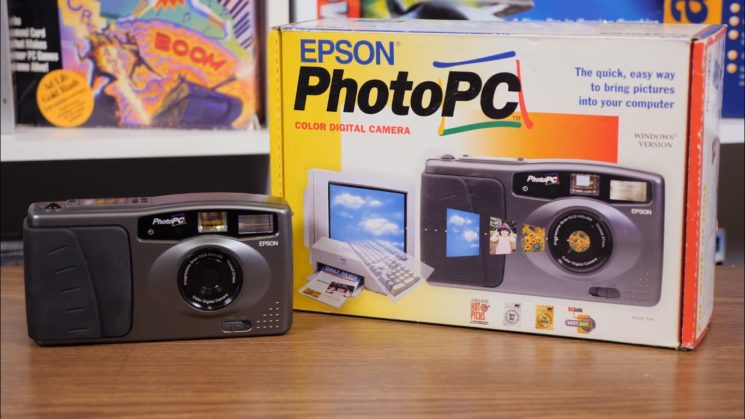 In 2018, we are talking about a camera able to produce 400 MP photos. It’s a great thing to follow the progress of technology and be a part of it. But sometimes it’s also great to travel back in time, just for fun. Lazy Game Reviews takes you back to the past and shoots with Epson PhotoPC, the first consumer digital camera from Epson. There’s the full experience, from unboxing, through shooting, to transferring and editing the photos. And if you had one of the digital cameras from the ‘90s, this will certainly bring back some memories.

Epson PhotoPC was first introduced in 1995. It was widely marketed in 1996 at a suggested retail price of $499. According to the box, it was “a quick and easy way to bring pictures into your computer.” The model in the video has 1MB of internal flash memory. It shoots 640 x 480 photos at “high resolution” and 320 x 240 at “standard resolution.” With the available storage, it’s able to store 16 large or 32 small photos. But it’s expandable with optional memory modules up to 4 MB, although these were pretty expensive at the time this camera was on the market.

The camera features a 43mm equivalent lens, a fixed aperture of f/5.6, fixed ISO of 130, and automatic electronic shutter going from 1/30 to 1/10,000 second. The tiny screen on top gives you some basic info on the settings. There are a couple of buttons, and what I find interesting is deleting the photos. The tiny button on the top only lets you delete the most recent image. If you want to do anything else, you need to transfer the photos to your computer.

Since digital photography was still fairly new at the time, it’s fun to see the suggestions on the box what you can do with the digital photos you take with Epson PhotoPC. Although they’re crappy, low-res images, they’re not bad for that time.

This video reminded me of the first digital camera I used and brought back memories. I think it was Fujifilm FinePix A200, which was actually my dad’s. He didn’t allow me to use it because “I would break it.” So I would snitch when he was asleep and go out with it to take photos of concerts. Ah, good times!

What was your first digital camera? Have you ever used Epson PhotoPC?

Watch This 1995 Film That Shows That A Grip Does

Remember Tamagotchi? Now it has a built-in AR camera

Quick tip: how to remember the F-Stop Scale like a boss

« Chairpod is a tripod that doubles as a chair, and it’s brilliant. Or not
DJI Mavic Air leaks hours ahead of official announcement »