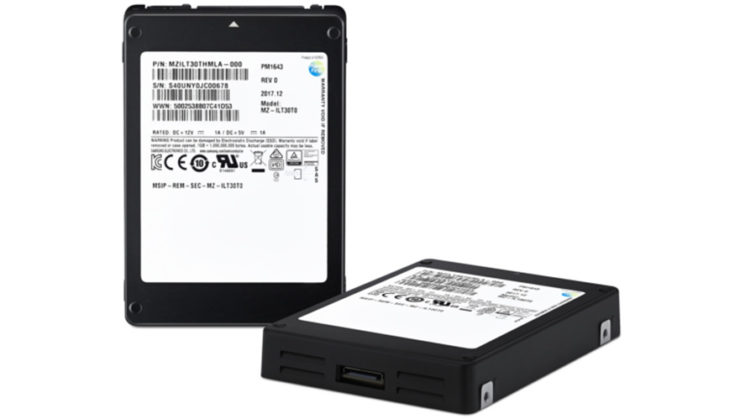 A couple of sites are calling this the “World’s largest SSD“, because that’s what Samsung are claiming. But, it is a little inaccurate (sort of), seeing as Seagate showed off their 60TB 3.5″ SSD in late summer 2016. But, this is the largest SSD with a 2.5″ form factor. Coming in at 30.72TB total capacity that’s a whole lot of space and a whole lot of speed. And while Seagate’s 60TB drive may be bigger, it seems it was more of a proof of concept that never actually went on sale. This one, Samsung say, absolutely will.

The drive is made by combining 32 of the new 1TB NAND flash packages. Each of those, in turn, is made up of 16 stacked layers of 512gigabit V-NAND chips. Samsung say that they’ve managed to cut the chip size in half, which precisely doubles the capacity over their previous 15.36TB SSD model, which currently sits at around the $10K price mark. A little expensive for just storing your photos on, but for big video production who need fast access to a whole ton of footage, it’s not that bad of an investment.

To help with the increased capacity, Samsung have also done some work on the speed of the device. They say that the performance also comes in at almost twice that of the 15.36TB model.

In addition to the doubled capacity, performance levels have risen significantly and are nearly twice that of Samsung’s previous generation high-capacity SAS SSD. Based on a 12Gb/s SAS interface, the new PM1643 drive features random read and write speeds of up to 400,000 IOPS and 50,000 IOPS, and sequential read and write speeds of up to 2,100MB/s and 1,700 MB/s, respectively. These represent approximately four times the random read performance and three times the sequential read performance of a typical 2.5-inch SATA SSD.

No official price or release date has been announced yet, although they that they started manufacturing the drive in January. They also plan to expand the lineup with a new 15.36TB model, as well as 7.68TB, 3.84TB, 1.92TB, 960GB and 800GB versions to help “accelerate the transition from hard disk drives (HDDs) to SSDs in the enterprise market”.

I think it’s great that SSD capacity and speed are ever on the increase. But, for the most part, Samsung seems to be leading the charge with everybody else playing catchup. This means that Samsung can pretty much name their price, and SSDs have a long way to go before they reach the $-per-GB of something like traditional hard drives. I really hope that other manufacturers, especially the merged Western Digital/SanDisk really start to innovate and help drive the prices down.