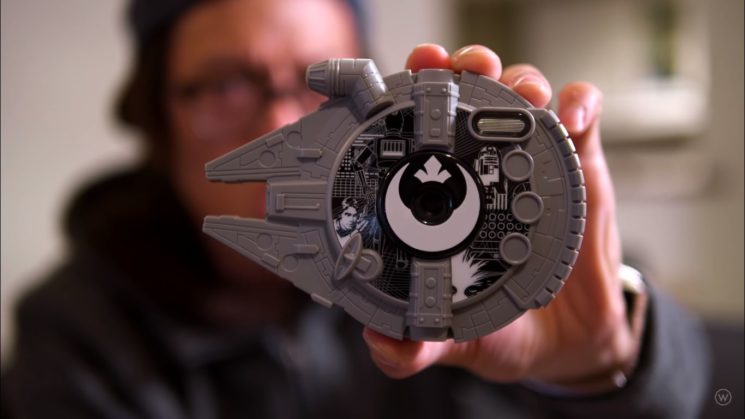 We’ve seen Kai Wong goof around with funny cameras before. In one of his recent videos, he tested a digital toy camera you might wanna check out if you’re a Star Wars fan. He got this Millennium Falcon camera for Christmas, and he decided to test it out.

It’s a plastic “up to 5 MP” camera, but surprisingly, Kai took some pretty decent shots with it. If you ever needed a proof that gear doesn’t matter… Anyway, let’s take a closer look at this amazingly ridiculous little camera.

The Millennium Falcon camera has a tiny 1.44 inch LCD screen, so Kai uses it as a viewfinder. It shots 1.2 MP images interpolated to 5MP. As for the dynamic range… What dynamic range? Naturally, this is a toy camera, so you don’t have much choice when it comes to features, image quality… Or anything, really. But it’s interesting that even a cheap plastic camera like this has a tripod mount.

Kai took the Millennium Falcon camera to two locations and captured a pretty epic sunset. Of course, this camera didn’t capture the stunning beauty of the golden hour, but some images are still pretty good! Kai made the last photo by merging images together in Photoshop. He counted in the terrible dynamic range and did the best he could to capture decent shots. Despite the low resolution and poor dynamic range, I think he nailed it.

Of course, this review is more of a joke, in Kai’s recognizable style. As for the overexploitation of Star Wars, it sometimes makes me cringe. But at the same time, I love all that crap that has something from Star Wars on it. Of course, I’ll stick to my Nikon D7000 for taking photos. But if I wanted to make someone’s child (or my inner child) happy… I would totally buy this toy camera.

How to stabilize your camera even in horrible light conditions