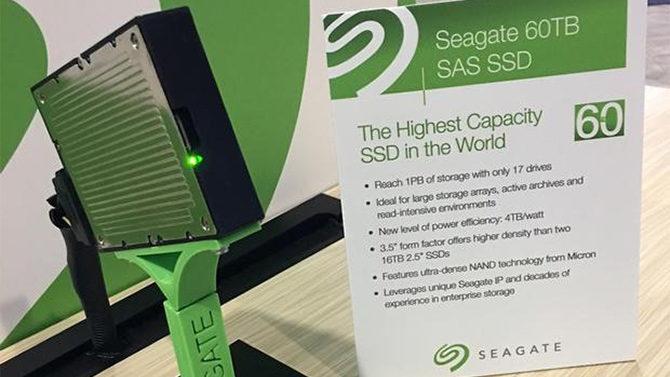 When I upgraded from 386 to 486, my hard drive went from a measly 40MB to a whopping 240MB. Totally blown away. Look at all this extra space I have! That was 22 years ago. Since then, memory cards that store a thousand times as much are the size of a fingernail and cost relatively little. 2-4TB hard drives are now also pretty commonplace and inexpensive. So, I’m kind of indifferent to the storage capacity race these days.

Then Seagate come along and announce a monster 60TB 3.5″ drive. This would be impressive even if it were just a regular old hard drive, but this thing is an SSD. To give you an idea of just how ridiculous this capacity is, Seagate put together a list of highlights. Right at the top, they mention that you can reach 1PB (1 Petabyte) with only 17 of them.

Visit us @flashmem and see the world's largest #SSD at 60TB! pic.twitter.com/a2vcDrgfk7

Storage demands are constantly on the rise. In fact, I have about 9TB currently attached to the computer I’m writing this on. I’m running out of space and seriously considering a pair of Western Digital 5TB drives. We’re all just creating so much photo and video content these days. There’s really no such thing as having “too much space”.

Seagate state that the drive could hold approximately “400 million photos on a typical social media platform or 12,000 DVD movies”. Numbers like this are usually meaningless unless you know exactly how big those files are. So, let’s do a little maths.

400 million photographs into 60TB is around 150KB per image. As they say, social media size. If we look at something like a D800, we get Raw files that average around 50MB. Now the numbers look a little more reasonable, although you’re still looking at around 1.2 million Raw files. That’s a little over half of Pete Souza’s presidential photography career.

The new drive is not yet available, and is expected to arrive sometime during 2017. But I wouldn’t count on being able to get one. Aimed at enterprise customers, they probably won’t be available on Amazon any time soon.

Of course, if you can cover the price tag, Seagate may make an exception and sell you one. Official pricing has not been announced, although I would expect it is substantial. Samsung’s PM1633a, which is about a quarter  of this capacity at 15.36TB costs around $10,000.

If it does ever come to the consumer market, let’s just hope they’re more reliable than Seagate’s HDDs. It wouldn’t be good if they were facing another class action lawsuit.

Can you realistically see yourself requiring a drive this large? Or is this just ridiculous and you don’t think anybody will really need this much space? Let us know your thoughts in the comments.