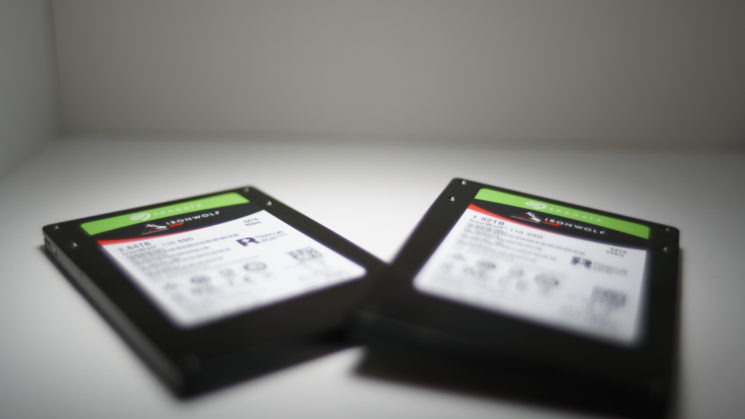 Seagate recently released NAS specific Ironwolf SSD drives. So what makes them so special that they are specifically for use in a NAS?

SSDs are great because they are much faster than older spinning hard drives because they don’t have spinning plates. Hard drives with plates spend more time looking for the information on them while SSDs can access the data much faster.

The downside of SSDs is that they don’t last as long as older spinning drives. Having said that. As a general rule, SSDs will last about 3000 to 100,000 writes. That is a very generic number though. Also, if you think about it, that many writes mean you’ll replace most drives before they run out.

You’ll notice that these Ironwolf SSDs don’t seem to be delivering the “usual” sizes. The two that Seagate sent me were the 1.9TB and the 3.8TB models. As I understand it, the lower sizes are one of the NAS differences. Seagate is using the “leftover” storage as redundancy and this makes the drives better suited to being on and accessible 24/7.

Why use an SSD in a NAS?

Even though SSDs don’t last as long as traditional drives, they are a lot faster. I tested these two drives in my Promise R2+. With two 3TB spinning drives in there, set to RAID 0, I was getting speeds of 213 MB/s write and 180 MB/s read. With the two SSDs installed and set to RAID 0, I was getting 324 MB/s write and 442 MB/s read. Now that’s not the 535 MB/s write and 560 MB/s read that Seagate claims – although there are a lot of factors that could be causing that discrepancy. My Promise R2+ is getting a bit old and it’s connected via a dock and another Raid array. It’s also Thunderbolt 2, but that should be more than fast enough.

How you could use these drives

You could use these drives on their own in a computer or external case, although there are cheaper drives for that. These are best used in a NAS and there are two main ways to do that. There’s the pricey way, which is to fill a NAS with all of these. You could do a two-bay or a four-bay, for example – that would be a super fast NAS. If you connected to it via 10 gigabits, you could edit 4K video directly off of it.

The other way to use the drives is to add it to an existing NAS to speed up caching. Caching is when your NAS uses the SSD to quickly access data that you use often, so most of your data is still on the slower spinning drives. The slower drives will give you more storage space than the SSD and the SSD could be caching your most accessed data. This will then let you work faster than if you were just using the spinning drives on their own. This is, of course, a very simplified example, but you get the idea.

What other advantages are there?

If you’ve read any of my previous looks at Seagate drives, you’ll know that I am a fan of their included support. They come with a five-year warranty, which is pretty good. They also come with two years of data recovery. So if anything goes wrong with them in those two years, Seagate will send them to a data recovery centre for you. This isn’t available in every country, so check your location.

A feature that they say is coming is health management. This feature would work along with the software in your NAS to monitor your drive for potential issues.

I think these SSDs could be a good option for people who are looking to add one to their NAS arrays. Using it as a caching drive could significantly speed up your everyday use. Those who have the money could go crazy and buy four or more of them. You could then fill up an entire NAS with them – I’d love to see how fast that would be at RAID 0.

Seagate Ironwolf Drives to store all those photos and videos