The G-Technology Shuttle XL EV is a beast of a RAID array and has the storage and speed to deal with just about anything you can throw at it. Or so they say.

I’ve been shooting RAW video on and off for the last year, and RAW means space.

To summarise, RAW video files are huge, so you need big hard drives to work with them. Not just big but also fast drives and computers. The bigger the file, the more oomph you’re going to need to work with them.

So a good solution is a RAID system. A RAID system is, simply put, a box that allows you to connect a bunch of hard drives together so you can use them as one big hard drive on your computer. There are different options when it comes to how to set it up but here are two of the most common ones:

For the last few years, I’ve been using the two-bay Promise R2+ Thunderbolt 2 RAID system and it has served me well. Sadly, it was getting a bit slow once I started working with 4K Raw footage. Initially, I looked at replacing the two “internal” spinning drives in it with SSDs which would have sped it up nicely. There were no SSDs the size that I need, at a reasonable price (or at all for that matter).  On average these days, even the smallest projects will be between 2-3TB and the larger ones, well you don’t want to know. And I could be working on 3-4 projects at once, so I really need at least 4-5TB at any one time.

To get 4TB of SSD storage into a two-bay RAID is doable, but the cost was prohibitive. It also did not scale well when going up in space requirement. I needed another solution. Something interesting about RAID systems is that the more drives you put in it, the faster they get. This means that if I got a system with more than two drives in it, I could get one that would be close enough to SSD speeds that it would work.

Enter the G-Technology Shuttle XL EV thunderbolt 3. This is an eight-bay RAID array that gives you two of those bays to use for things other than drives. What type of things you may ask? Well, I use them for pods that allow me to insert my Atomos caddies straight into the RAID which makes transferring data super easy and quick. 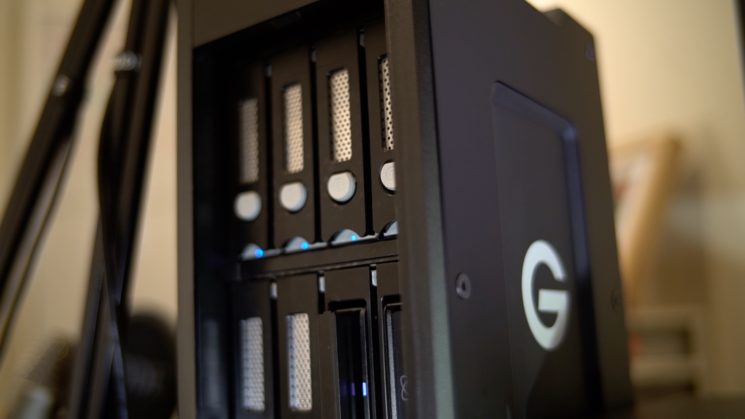 The EV model comes with two bays clear which allows you to install modules. I use mine for modules that allow to insert the caddies from my Atomos Shogun straight into unit for transfer, which is fast and less hassle with no cables to fiddle with.

As the name suggests, it’s also using Thunderbolt 3 which is super fast for data speeds. (As an aside, not that it’s important, but it also looks pretty cool.)

You’ve got a door in the front of the box, which you can lower to get access to the drive bays. It also has two Thunderbolts 3 ports, which means you can plug one into your computer and the other into a whole host of other accessories. Think more drives, hubs or monitors. I’ve got mine going into my Promise RAID, which I still use for some things, and the Promise RAID goes into my 4K display. 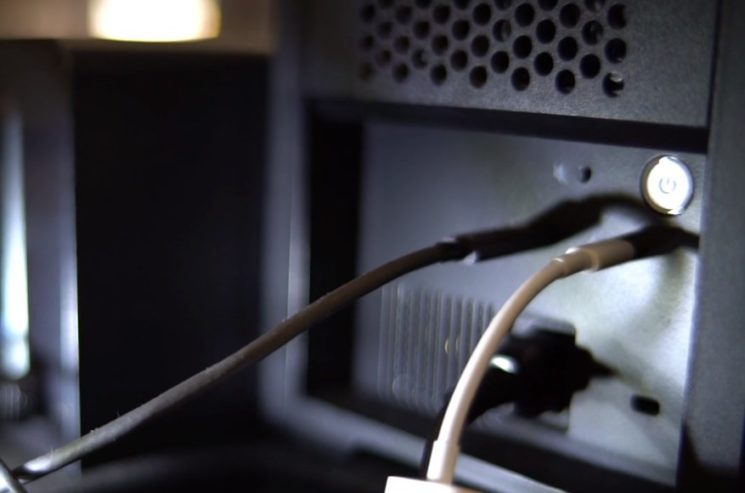 The Shuttle XL comes with drives already pre-installed and comes in various configurations from 24TB all the way up to 72TB. I would prefer if you could purchase them without drives, but it’s not the end of the world.

So, is it fast? It most certainly is. Here is a speed test with the default configuration set to RAID 5. As you can see, it writes at about 1.1Gigs/s and reads at about 0.9Gigs/s. 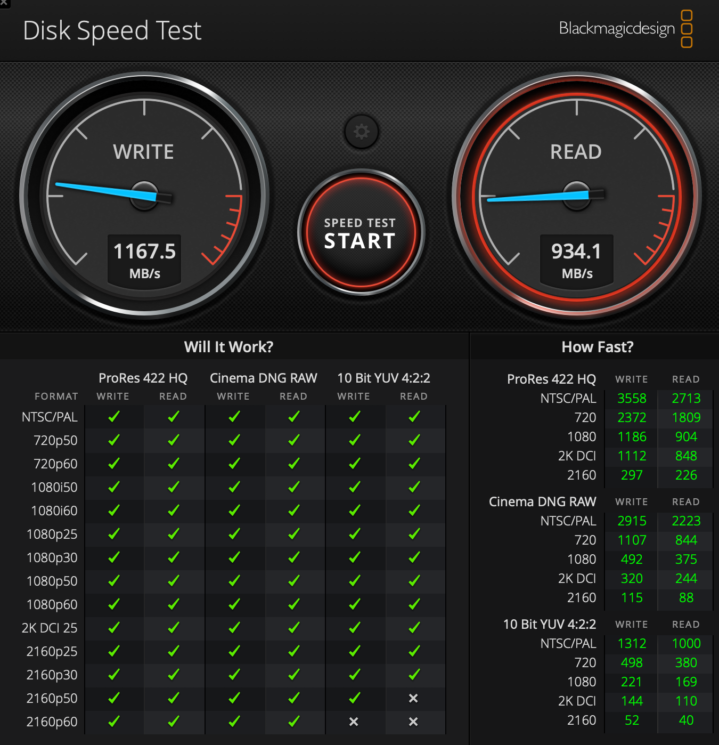 So that’s a test, but how does it perform in real-world use? In a single word: perfectly!

One of the main reasons why I “needed” to buy one of these was that I’ve started working on a documentary that I am going to be shooting over the next three years. I’ll be working on other projects at the same time of course, but I needed a device that would allow me to store terabytes of data and edit it for the next three years. We are shooting much of the project in Progress RAW. That means that on average, we are creating 1-2TB of footage each shooting day.

The Shuttle XL has been fantastic! I am able to be cutting a three-camera interview shot in 4K ProRess Raw and not skip a beat. At the end of the day, that’s what’s really important about all this gear talk. I like to nerd out on the gear so that when it comes time to be creative, I can just get into a flow. I don’t have to stop and wait for things to render or catch up with my ideas.

That’s pretty fast, but I got the chance to see if it could go faster.

Seagate contacted me and asked if I would like to try out some of their new 12TB IronWolf Pro drives. So I figured, it would be fun to install them in the G-Technology Shuttle and see if there was a noticeable difference.

Changing the drives in the Shuttle XL was pretty easy. You just clip out the drive bays, replace the drives and put the new ones in. Then there is an application that you use on your computer to set up the system. This app is also really good for maintaining the Shuttle XL and just checking to see that everything is working as it should be. 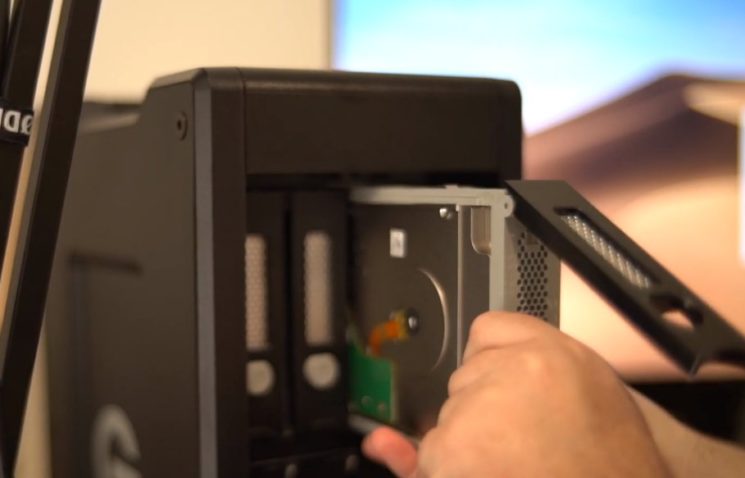 I’ve been using the Seagate Ironwolf drives in my Synology NAS systems for years so was keen to see how they’d perform in the G-Technology Shuttle. 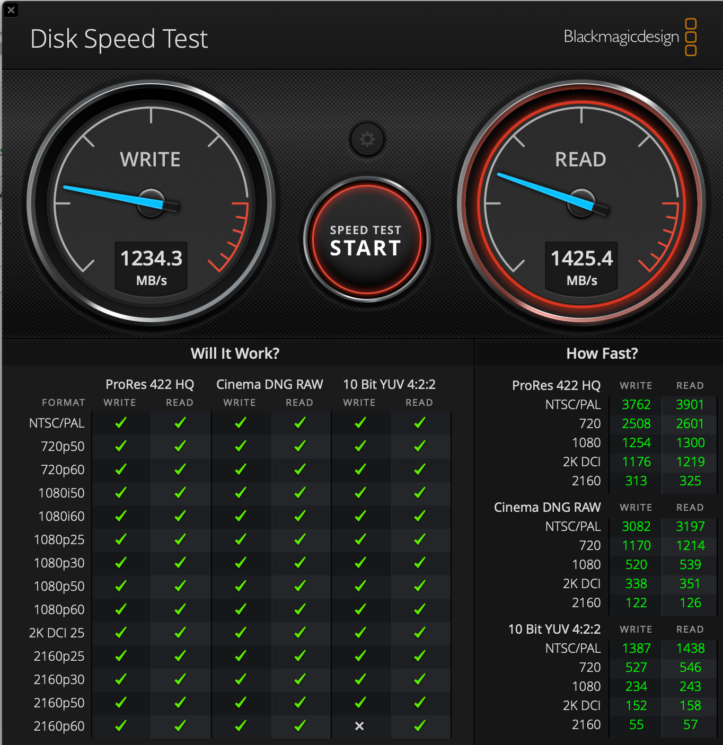 Where I do get really great value from the Seagate drives is the support they offer. These drives are designed to be used in a RAID system, so they are meant to be on all day every day. When I’ve bought some cheaper drives in the past, they haven’t lasted more than a year or two in my RAIDs. Now I’m sure the Seagate drives could fail too. I believe there are only two kinds of hard drives in the world, those that have failed and those that haven’t failed yet. But the devil’s in the details. This is also why I opted for RAID 5 which can handle a single drive failure.

*If you feel extra paranoid, you could go with RAID 6 which offers protection against two discs failing simultaneously.

The IronWolf Pro models all come with a five-year warranty and even better, they come with two years of data recovery service included. So if something goes wrong in those five years, not only will they replace the drive, for two years of coverage they will even do their best to recover the data that was on the drive that failed. I say “do their best” because I’ve tried to recover stuff from failed drives in the past and sometimes there’s just nothing that can be done, so no promises. But they’ll try and they’ll use the top people and tech to do so.

The IronWolf Pro drives have got rotational vibration sensors that help keep them running smoothly. Having multiple hard drives next to each other can actually cause them to damage each other from the vibration of the drives. These sensors help to protect the drives from that.

Even though the IronWolf Pro drives are designed more for a NAS like my Synology systems, they are working fantastically in my G-Technology system and I look forward to many years of great service from them.

Seagate Ironwolf Drives to store all those photos and videos