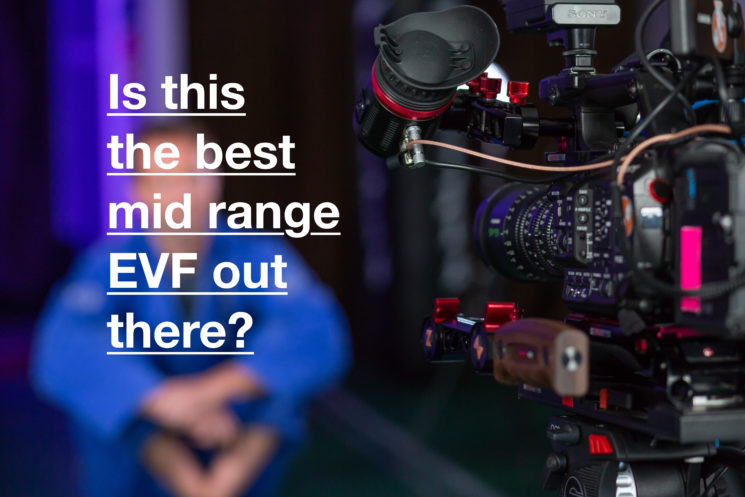 A while back I wrote a review of the Zacuto Gratical HD, where I wrote about some of the benefits of using a third-party EVF. This time, I want to look at the other EVF from Zacuto, the Kameleon.

Let’s start with the why though. Essentially, third-party EVF offers you consistency across any camera no matter how good or bad the built-in EVF is. If you use a product like the Zacuto EVF, you always know exactly what you’re seeing in the EVF is consistent. You can trust that the colors are what you think they are. It’s good to know that the scopes and focus assist are accurate. Some cameras don’t allow you to install custom LUTS, which is another very handy feature that the Zacuto EVFs have.

The Kameleon is the latest EVF from Zacuto. That said, it’s not a wholly Zacuto product. It was first seen from a company called JTZ. Zacuto have partnered with them to create the Kameleon.

The main difference I’ve found from the partnership was that the interface is a bit different than what I am used to with Zacuto. I wouldn’t say it’s better or worse, just different. I did find that my muscle memory had to reset a bit from how I was used to be using the other Zacuto EVFs I’ve used. 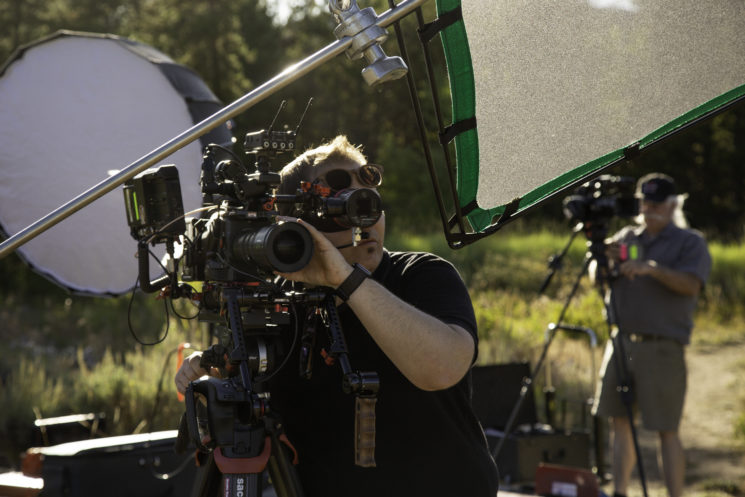 The Kameleon has a recommended retail price of $1950. It is the third entry into Zacuto’s EVF line. You have the Big Daddy, which is the Gratical HD @$2,450.00. You then have the smaller unit, the Gratical Eye @$1,950. Other than the size, you also have some feature differences between the HD and the Eye. The Gratical has SDI and HDMI connections. The Eye has only HDMI. The Gratical HD is powered by Canon battery. The Eye is powered over D-Tap from your camera battery. It also has a USB-C connection that allows you to power it. This is a very handy feature as it gives you some nice options when using with a smaller camera. For example, you may be using it with a Black Magic Pocket Cinema Camera 4K/6K. You could run both camera and EVF off a simple USB battery pack.

There are also a few features that the HD has which the Eye lacks. Of course, the smaller size and weight are big selling points of the Eye. But as usual, there is not such thing as a perfect thing. ?

So, where does the Kameleon fit into this happy family? Somewhere in the middle kind of. It’s smaller than the HD, but bigger than the Eye. It has both SDI and HDMI input, but not output. It’s powered via a cable that goes to a D-Tap connection. It has that in common with the Eye. More on the other differences later. 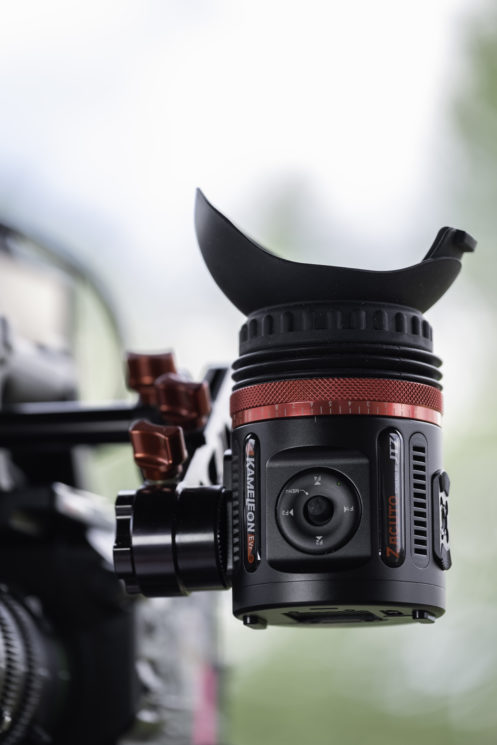 If you find yourself shooting in extreme, or even semi-extreme climates, a feature that is often overlooked is Zacuto’s anti-fog feature. If you’ve ever gone from an air-conditioned hotel out into a super hot and humid outdoors, you know what I’m talking about. You’ve got to give your camera a couple of minutes for the lenses and EVF to acclimate as they fog up. Zacuto has some very clever stuff built into their eye-piece to avoid this issue.

For mounting, we’ve got Arri Rosettes on both sides. This gives you nice mounting options. Of course, Zacuto would recommend that you use one of their mounting options. These can be pricey, but they are really good. They’re very well-made and, for me, a good selling point is that they are really easy to adjust. If I need to raise, lower or adjust the EVFs angle, it’s super easy with the Zacuto solution. I only wish it was a bit lighter as the Zacuto mount does add a fair bit of weight. 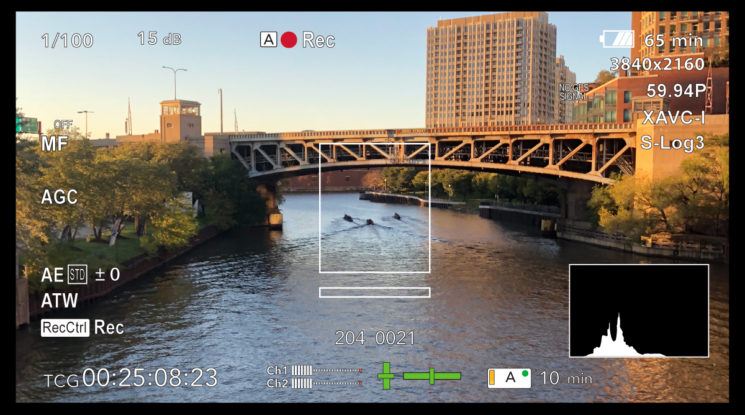 There are the standard display options such as custom scaling, frame lines, anamorphic 4:1 zoom, false color, red line peaking, zebra stripes, histogram. You can import 1D and 3D LUTS. This is a nice upgrade from the Gratical which can only import 1D LUTS. I’d hope we’d see this added to the other units via a software up. Though it may be a hardware limitation, I’m not sure.

I would have much rather have had a waveform monitor instead of the histogram. I’d also love to see a vectorscope in the display options. That said, I can see why Zacuto may not want to do this. With the Gratical, your scopes can appear under your image. On the Kameleon, however, your scopes float on top of your image. The more you add, the “busier” it would get.

The Kameleon has a 4K input, whereas the Graticals have HD input. This shouldn’t make a difference to most people. But if you have a camera that only outputs a 4K signal over HDMI or SDI, you’ll need the Kameleon. 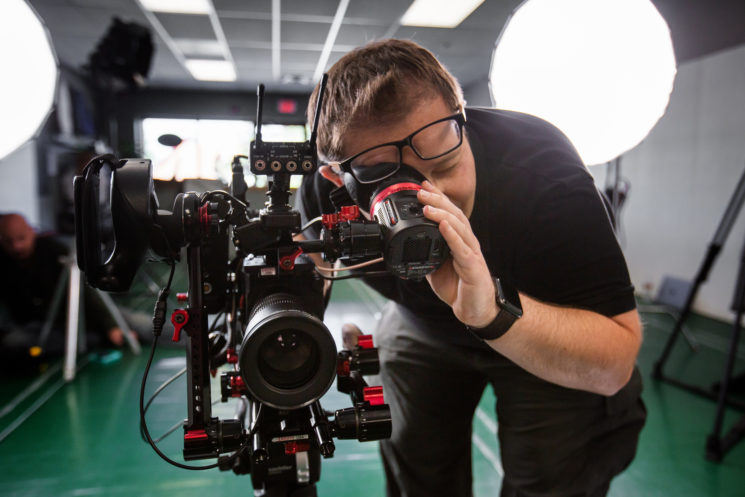 So, is the Kameleon for you or not? If like me, you already have the Gratical, then no. The added 3D LUTS are nice, but not enough to cross grade. If you have the Eye, you’d get the 3D LUTS with a 1080 display instead of 720.

But if you have no third party EVF and you’re in the market, which one should you get?

As usual with these types of things, it depends. If you need to output SDI and have waveforms, then the Gratical HD is for you. If you want the smallest and lightest option, then the Eye is for you. But if you’re looking for something in the middle, then the Kameleon is the best option. It’s a smaller unit, but still has SDI as well as HDMI input and accepts a 4K signal. As well as all the other nice Zacuto touches.

« I found the perfect drone bag for my Mavic
One photographer’s response for a $12,000,000 renovation asking for free prints »